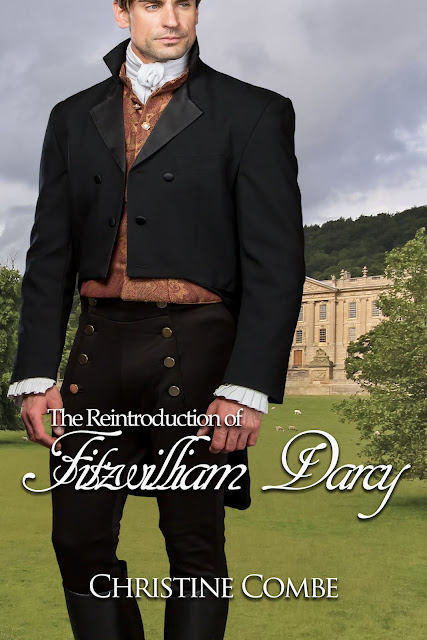 Greetings, fellow Austenians! I am absolutely chuffed to visit My Jane Austen Book Club again to talk about a new book! My upcoming release The Reintroduction of Fitzwilliam Darcy is my first standalone Austen variation, and I really hope you’ll like it as much as I’ve enjoyed writing it. 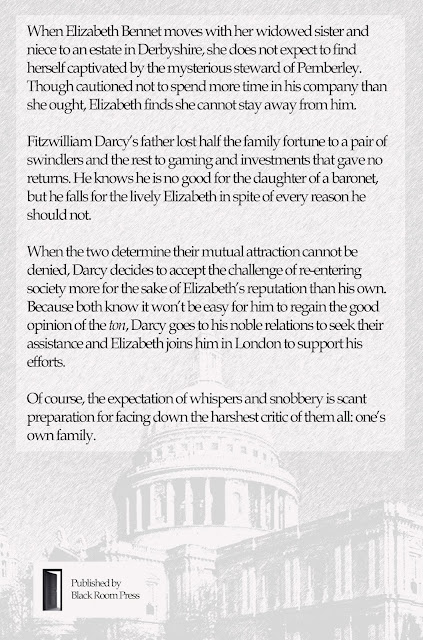 In this new story, circumstances are vastly different for ODC: Elizabeth and her sisters are the daughters of a baronet, and Darcy has no fortune. But as always, the stars align and one of literature’s most beloved couples unite, determined to take on the world together!

In case you haven’t visited my blog or been following along as I posted the chapters at A Happy Assembly, here’s the opening scene of chapter one:

“Lizzy… I cannot do this anymore.”

Elizabeth Bennet lifted her head to gaze with some concern toward her elder sister, Jane Bingley, who stood at the drawing room window glancing forlornly out into the rainy day. So absorbed in her book had she been that she’d not even noticed Jane had put aside the gown she’d been embroidering for her daughter, let alone moved from the sofa.

Placing a ribbon between the pages to mark her place, Elizabeth stood and moved to her sister’s side. “Can’t do what, Jane?” she asked softly.

“This,” Jane replied, gesturing out the window before she turned and gestured again to the room they occupied. “Or this.”

A sigh escaped her as she turned once more to the misty, wet prospect beyond Netherfield’s window. “I’ve been out of mourning a week, Lizzy—just a week—and already Mamma has suggested I go to town for the Season to find a new father for Margaret.”

Shock seized Elizabeth’s tongue for half a minute, before she sputtered indignantly, “How abominably thoughtless of her!” She then slipped an arm about Jane’s waist and laid her head to her sister’s shoulder. “I am so sorry, Jane, that Mamma and her foolishness have upset you so.”

Elizabeth sympathized with Jane’s distress—the eldest Bennet daughter had loved Charles Bingley with all her heart, and they had been married just two years when he’d taken ill with such a dreadful infection of the lungs that he had been unable to recover. Jane Bennet Bingley was made a widow at only two and twenty years of age, and their infant daughter Margaret had lost a father she would never remember. Lady Bennet had for many years been certain of Jane’s “angelic” beauty securing her a very wealthy husband, and she had not been disappointed on learning that the young gentleman from the north who’d leased the vacant estate just three miles from their own was wealthy, single, and in want of a wife. Charles and Jane were married by Christmas that year, and Margaret—named for her father’s dearly departed mother—had arrived the following autumn.

The girls’ mother had been further hopeful that Jane’s marrying a man of five thousand a year would throw her sisters in the path of other rich men, but dear Charles had disappointed her there. Once settled in the country with his new wife, he declared that he was quite content to stay there the whole year ‘round. Few of his wealthy friends were invited to Netherfield throughout his marriage, much to Lady Bennet’s vexation, and what sojourns he made to Town were solely for business purposes; he always went alone and he always returned in a day or two.

It galled Elizabeth that her mother could be so insensitive to Jane’s feelings: she just wasn’t ready to move on. But Lady Bennet was remiss to recollect that Charles’ fortune, a combination of his inheritance and Netherfield’s rents, had been left unencumbered to Jane and Margaret—much to the vexation of his sisters, Caroline Bingley and Louisa Bingley Hurst, who had each received only family heirlooms upon their brother’s death (Caroline had also been granted control of her inheritance of twenty thousand pounds). Because of this remarkable legacy, Jane had not only the Netherfield estate but also a house in London, and enough wealth that she did not need a husband’s income to support herself and her daughter.

In fact, with Bingley’s eight thousand a year now being her own, Jane herself was quite the catch. To that end, Elizabeth was little surprised that her mother hoped to get her sister into Town for the Season. Wealth attracted wealth, and no doubt Lady Bennet had hopes of a second rich husband doing for her other four daughters what Jane’s first had not. Also, because Jane had married at twenty their mother had decided that Elizabeth should also—and greatly disappointed was she to have been unsuccessful in that endeavor, as her second daughter would be one and twenty in just six weeks.

Right in the middle of the London Season. No doubt Lady Bennet was already planning her wardrobe, that she might take her to Town and finally marry off her most troublesome child, that she could begin readying the third for her debut.

Recalling Jane’s words, Elizabeth asked her, “What did you mean, dearest, when you said you couldn’t do this anymore?”

Elizabeth stood straight. “Leave Netherfield? So you mean to go to London after all?”

Jane shook her head. “No, not to London. Mamma would find me out and harangue me about taking part in the Season. I could not bear it.”

She moved away from the window then and went back to her seat on the sofa; Elizabeth followed and returned to her chair.

“Then where do you mean to go?”

“Be assured I have given the matter a great deal of thought this last year,” Jane began slowly as she picked up the unfinished toddler gown and held it in her lap. “The truth of the matter is, there are far too many memories of Charles here for me to remain. It has become so painful to move about in this house that at times I find I cannot even breathe. Thus, I have decided to seek an estate elsewhere. I mean to consult with Father as soon as the weather permits travel.”

Elizabeth frowned. “So… you will give up Netherfield?”

She almost couldn’t believe it. Charles Bingley had only leased the estate when he’d first come into the neighborhood near three years and a half ago, but as soon as he’d learned Jane was with child, he’d purchased it outright. It was to have been their home, where he could lay down the roots of gentrification for his offspring, as his father had hoped for him, and from where she could raise those children but still be close to her beloved family. Jane had been so enamored of being mistress of so fine an estate, Elizabeth could hardly think of the place and not associate Jane with it.

“I think I shall lease it, perhaps,” Jane replied to her query. “Or maybe I ought to offer it to our parents? In any case, I should like to keep the house for Margaret’s sake. She’ll not have to be concerned for a home if she should decide never to marry. And I may well return in a year or two and live out my days here. It’s just that… for now…”

Her voice broke as tears filled her eyes. Jane brought the gown to her face and cried into it as Elizabeth moved again to her side to embrace her.

“For now it is too much for you,” she said softly and felt Jane nod. “I do understand, Jane. And at risk of emulating Mary, as Ruth begged of Naomi: entreat me not to leave thee, or to return from following after thee; for wither thou goest, I will go. Where thou lodgest, I will lodge.”

When Jane looked up at her with a teary, visibly relieved gaze, Elizabeth smiled. “I could not leave my most beloved sister to face the wide world alone, now could I?”

Jane threw her arms around her and held her tight. “I have been wanting to ask you and so afraid to at the same time! Forgive me being so dependent upon you now, Lizzy, when you are yet full young and have not known life outside of Longbourn.”

Elizabeth returned the embrace. “Jane, there is nothing to forgive. You are still mourning your husband—no matter that society thinks you ought to have done with it by now, let alone our marriage-obsessed mother—and you will need help, not only with your home but with Meg. It is my honor to be of what assistance to you I can be.”

The dice is cast! Tell me what you think in the comments below, and enter for a chance to win an ebook copy of The Reintroduction of Fitzwilliam Darcy! 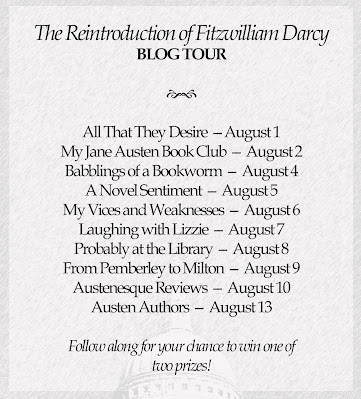 All That They Desire

I’ve really been enjoying the book on AHA. Love the cover! Can’t wait to see what happens next.

Thank you for the lovely comments! I'm glad you're enjoying the story.

This is a new twist to the story! I love that ODC believe that they shouldn't dream of the other, but just can't stay away from each other. I have enjoyed reading on AHA, and look forward to each new post!

Those girls! I hope they stay with D&E! Love the story so far! And hopefully Jane has the opportunity to love again!

This story is phenomenal--I've been reading it on AHA. I'm so glad that it is being published as you deserve accolades for an interesting, well written tale. Thanks for entering me in the drawing.

Poor Jane! She is lucky with such a sister as Lizzy. (but no Bingley...)
Congratulations on your new release!

Kimberly, TiffanyM, foreverHis, Unknown... Thank you all so much for the kind words, I am so chuffed you are enjoying my work so much!

Liking what I read. I'll definitively read it!

Susan is my name. It would not let me change the unknown.

Don't know why my post from 2 days ago posted as unknown, but here I am again:

"Poor Jane! She is lucky with such a sister as Lizzy. (but no Bingley...)
Congratulations on your new release!"

Thank oyu for sharing an execrept. I feel for Jane and she's so lucky to have a supportive sister like Lizzy.

I'm glad Jane isn't about to give in to her mother's demands.