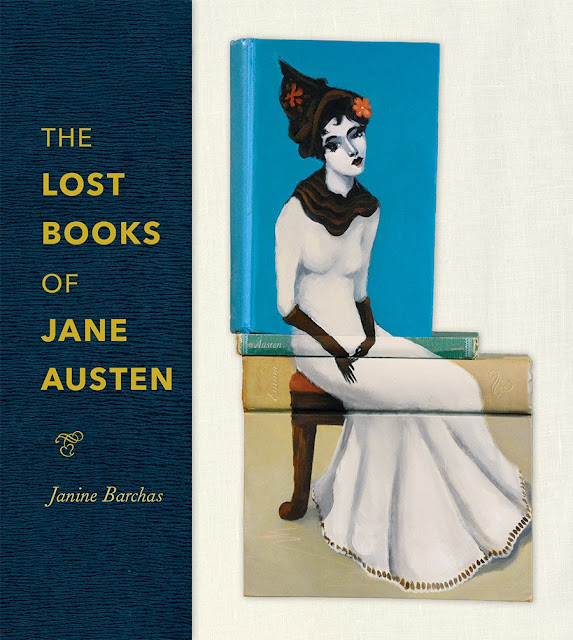 
Apparently, the mathematics at the basis of  Barchas's is that the decrease of the price of her books was indirectly proportional to the growth of Austen's popularity. The more the price decreased the more her readership grew. But it's not just as simple as that.

In all these years, bibliographers have generally  recorded the various editions of Austen's novels they considered respectable, while Barchas researched and collected all the information she could find about these popular volumes, which would never be featured in the catalogues of important academic libraries. How important were these one-dime or 15-cents editions to Austen growing popularity among readers? Enormously, Barchas  demonstrates. And they also brought to  a diversification inside   her readership.

Here are a couple of examples.  In the 1890s a library of famous books was published for working-class readers at one penny per copy, in the same years the Lever Brothers, soap manufacturers , published their own edition of the novels for their teenage customers to be exchanged for soap wrappers.

Barchar follows popular editions of Austen's works up to the 20th century,  when tie-in editions with images from Hollywood adaptations started to be used to promote the novels, a phenomenon we have come to know very well after the huge success of screen versions of Austen in recent years.

"Cheap books make authors canonical", Barchas declares in the opening sentence of her refreshing work. And that sums up her outlook on the matter.

Now, if you expect a boring list of titles and editions, something like an academic bibliographical compendium, you'd better forget it! You'll be amazed by the variety of the information collected  in this book and by its colloquial and extremely pleasurable style.

Leaf through the pages of an online sample


"This Ferociously researched book proves that a fresh set of methods can teach us something new about even this much-studied author. Barchas's innovatively defined evidence base steers a middle course between traditional interest in letters, diaries and published criticism as sources of reception history, and the interest in kitsch collectibles and fan fiction that began several decades ago" - Leah Price, Harvard University, author of How to Do Things with Books in Victorian Britain

Among the most enjoyable pages,  the ones dedicated to the vignettes.  In them, great importance is given to the human factor. Janine Barchas tells us intriguing stories of some of the unexpected owners of popular copies.

For instance, you'll be surprised to discover that both a Victorian meat-seller and Virginia Woolf  were the owner of random cheap copies!
Hellen Martha Horwood,  daughter of butchers working in Newgate Market, owned a copy of Mansfield Park in 1852. Virginia and Lionel Woolf, instead,  owned a dozen of editions of Austen's works, a few of which, unexpectedly,  from the cheap 1906 Everyman's Library.
You'll be also enticed by the story of how all at Windsor Castle, both upstairs and downstairs,  had opportunities to read Jane Austen in the 1850s,  since cheap Routledge reprints of her novels were included  in the libraries.


"A major new work by Janine Barchas, an outstanding critic both of Jane Austen and of book history. The Lost Books of Jane Austen is cogent and persuasive" - Peter Sabor, Mc Gill University, editor of The Cambridge Companion to Emma

From the book cover

In the nineteenth century, inexpensive editions of Jane Austen's novels targeted to Britain's working classes were sold at railway stations, traded for soap wrappers, and awarded as school prizes. At just pennies a copy, these reprints were some of the earliest mass-market paperbacks, with Austen's beloved stories squeezed into tight columns on thin, cheap paper. Few of these hard-lived bargain books survive, yet they made a substantial difference to Austen's early readership. These were the books bought and read by ordinary people.
Packed with nearly 100 full-color photographs of dazzling, sometimes gaudy, sometimes tasteless covers, The Lost Books of Jane Austen is a unique history of these rare and forgotten Austen volumes. Such shoddy editions, Janine Barchas argues, were instrumental in bringing Austen's work and reputation before the general public. Only by examining them can we grasp the chaotic range of Austen's popular reach among working-class readers.
Informed by the author's years of unconventional book hunting, The Lost Books of Jane Austen will surprise even the most ardent Janeite with glimpses of scruffy survivors that challenge the prevailing story of the author's steady and genteel rise. Thoroughly innovative and occasionally irreverent, this book will appeal in equal measure to book historians, Austen fans, and scholars of literary celebrity.

Janine Barchas is the Louann and Larry Temple Centennial Professor of English Literature at the University of Texas at Austin. She is the author of Matters of Fact in Jane Austen: History, Location, and Celebrity and Graphic Design, Print Culture, and the Eighteenth-Century Novel. She is also the creator behind What Jane Saw (www.whatjanesaw.org).

This book fascinates me

I really enjoy looking at all of the covers for the same book knowing that with each cover change, a new audience reads it. Thank you for being on this tour! Sara @ TLC Book Tours

thanks for linking this in. One for the Austenites... Cheers

I really enjoyed this book. The research, writing, and the images were fascinating to this book geek.