(by guest blogger Monica Cardinale) On June 23, at the Geelvinck Hinlopen Huis Museum in Amsterdam, Sandy Lerner gave a talk about her book "Second Impressions" (a Pride & Prejudice sequel she published as Ava Farmer), a book that took her 26 years to write, after a lot of reading and research. I particularly liked how she enlightened the audience about the theme of the immobility of women in Persuasion, something she understood after comprehending Austen's use of the noun "laundalette" at the end of the book.
The event was organized by the Jane Austen Society of The Netherlands to celebrate 200 years of Pride & Prejudice.
I'm glad to share some of my pictures with you Janeite readers of My Jane Austen Book Club. I hope you'll
like them! 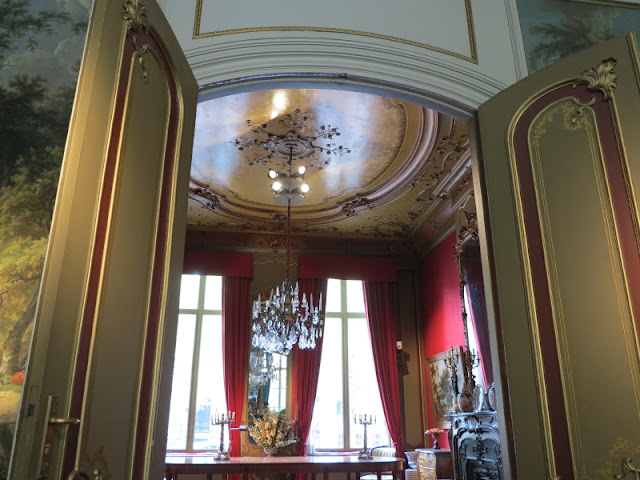 MY OWN MR DARCY BY KAREY WHITE - COVER REVEAL & GIVEAWAY 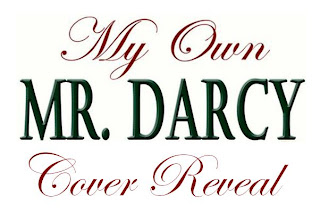 After being dragged to the 2005 movie Pride and Prejudice by her mother, sixteen-year-old Elizabeth’s life changes when Matthew Macfadyen’s Mr. Darcy appears on the screen. Lizzie falls hard and makes a promise to herself that she will settle for nothing less than her own Mr. Darcy. This ill-advised pledge threatens to ruin any chance of finding true love. During the six intervening years, she has refused to give any interested suitors a chance. They weren’t Mr. Darcy enough.

Coerced by her roommate, Elizabeth agrees to give the next interested guy ten dates before she dumps him. That guy is Chad, a kind and thoughtful science teacher and swim coach. While she’s dating Chad, her dream comes true in the form of a wealthy bookstore owner named Matt Dawson, who looks and acts like her Mr. Darcy. Of course she has to follow her dream. But as Elizabeth simultaneously dates a regular guy and the dazzling Mr. Dawson, she’s forced to re-evaluate what it was she loved about Mr. Darcy in the first place. 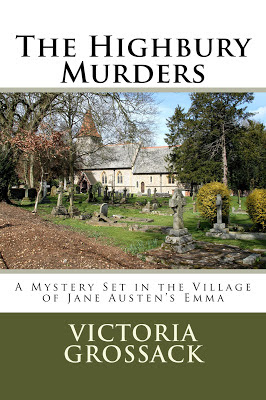 Welcome on My JA Book Club, Victoria ! I’m very happy you’ve joined our on line club and you accepted to talk Jane Austen with me.

Your Austen-inspired novel, The Highbury Murders,  is  a  mystery  set it in Emma Woodhouse’s village.  Why Highbury and not Mansfield Park or Longbourn? Is Emma your favourite Austen novel?
First, why Highbury?  I chose Highbury for several reasons. Emma has been described as a detective story without a body – however, there actually is a body, and hence the potential for a mystery. Second, Emma’s active imagination makes her a natural detective.
Secondly, is Emma my favourite Austen novel? That’s extremely difficult to answer. There’s a maturity in Austen’s three later works – Emma, Mansfield Park and Persuasion – which you don’t find in the three that were written earlier – Pride and Prejudice, Sense and Sensibility, and Northanger Abbey. On the other hand, there’s a joy in both Pride and Prejudice and Emma that is absent from the other novels. So, yes, Emma is my favourite but the competition is fierce.
Read more »
Posted by Maria Grazia at 19:23 6 comments: 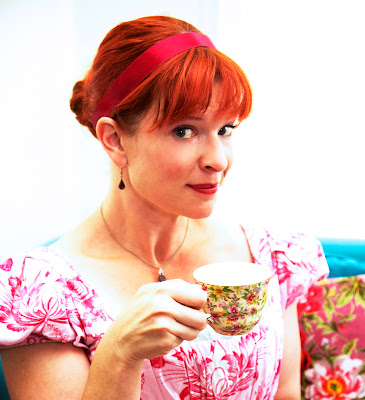 Penny Ashton is New Zealand’s own global comedienne who has been making a splash on the world stage since 2002 and she has sold out shows from Edinburgh to Adelaide to Edmonton. She has four Best NZ  Female Comedienne nominations, three Adelaide Fringe People’s Choice nominations, a Winnipeg Best in Fringe for Hot Pink Bits and won best performance by an International Poet at the London Farrago Awards.

Penny has represented New Zealand in The World Cup of Theatresports in Germany and Australasia in a Performance Poetry Slam Tournament Tour of the UK. In 2010 she performed by invitation at The Glastonbury Festival and reported from the Miss Universe Pageant in Las Vegas.

Hello and welcome to My Jane Austen Book Club, Penny. Can we start saying how you came to discover Jane Austen and her work, first of all?

I must confess to being forced to read Pride and Prejudice in my first year of High School and finding it pretty dull. I, like many others, had a change of heart upon watching 1995’s Pride and Prejudice but even more so because of Ang Lee’s beautiful adaptation of Sense and Sensibility.  I simply adored that film, particularly the character of Marianne. So I am afriad I am  one of “those” people who love her screen adaptations where to my mind they bring to life her best feature, which is her sparkling dialogue.
Read more »
Posted by Maria Grazia at 16:22 No comments: 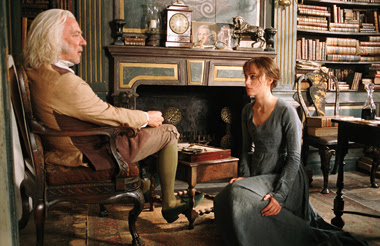 (by guest blogger Victoria Grossack)
As Father’s Day comes around, celebrated on the third Sunday in June in most, although certainly not all, countries around the world, Jane Austen devotees can contemplate the rich array of fathers portrayed in the author’s works.

By all accounts, Jane Austen had a wonderful relationship with her own father.  He believed in her abilities and encouraged her to read anything and everything in his library.  Despite the excellence of her own father, Jane Austen, by exercising her powers of observation and her lively imagination, created a completely different set of fathers and father figures in her six novels.

The Fathers of the Heroines

Mr. Bennet in Pride and Prejudice.  Mr. Bennet has five daughters.  He loves them, especially the heroine, Elizabeth, but not so unconditionally that he is unaware of their shortcomings.  He is witty and insightful but also indolent.  As a father he has been deficient, as he did not save money to buy them husbands, worthless or deserving.  He had not reigned in the excesses of his wife or his younger daughters. Mr. Bennet, perhaps because he is older and therefore wiser, shows more insight into people than do many of the people around him.  He is not taken in by Mr. Wickham, for example; whereas Elizabeth’s mistrust of that officer only occurs after she learns more information.
Read more »
Posted by Maria Grazia at 08:56 1 comment:

Best Gifts To Get A Jane Austen Fan 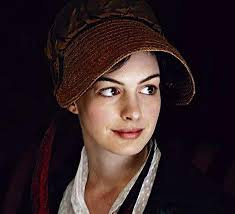 (by guest blogger Marcela de Vivo)
The most difficult aspect of shopping for a committed Jane Austen fan is that they have probably already read all of the Austen books and have seen all of the movies that have been inspired by her work.

There are, in fact, only six books, so it’s probably not a good idea to try and re-gift something that they probably already own or have at least already read through a couple of times.

For the Jane Austen super fan, you’ve got to get a lot more creative than that, and luckily for you, the life and work of Austen has inspired a lot of trinkets, memorabilia and themed products that make great gifts for someone who is a fan of her life and work.

You might have to do some digging, but usually it’ll just take a few minutes online to find some of these products and pinpoint the perfect solution for your Austen fan.
Read more »
Posted by Maria Grazia at 21:51 1 comment: 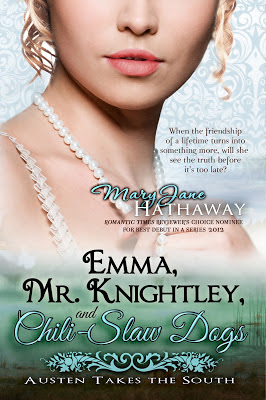 Brief posting to announce the winners of the two copies of  EMMA, MR KNIGHTLEY AND CHILI-SLAW DOGS, generously provided by the author, Mary Jane Hathaway.

Ceri  will get the kindle e-book version

Congratulations to winner and many grateful thanks to the author for being my guest!
Posted by Maria Grazia at 19:30 2 comments:

Email ThisBlogThis!Share to TwitterShare to FacebookShare to Pinterest
Labels: Giveaway 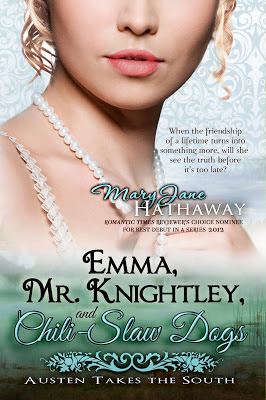 Mary Jane Hathaway is the pen name of an award-nominated writer who spends the majority of her literary energy on subjects un-related to Jane Austen. A homeschooling mother of six young children who rarely wear shoes, she’s madly in love with a man who has never read Pride and Prejudice. She holds degrees in Religious Studies and Theoretical Linguistics, and has a Jane Austen quote on the back of her van. She can be reached on facebook at her regular author page of Virginia Carmichael (which is another pen name, because she’s just that cool). She is here today to meet the readers of My Jane Austen Book Club and present her new " Emma, Mr Knightley and Chili-Slaw Dogs" . She has kindly accepted to answer some of my questions and to grant you a paperback of  Pride, Prejudice and Cheese Grits or an e-book copy of her new Emma - inspired novel! (check the giveaway details below the interview)

Hello and welcome back to my little corner in the blogosphere! Here's my fist question for you: you seem to be rather appreciative of both Jane Austen and typical Southern  dishes,  Mary Jane. How does this odd pair came to your mind for a series of book? 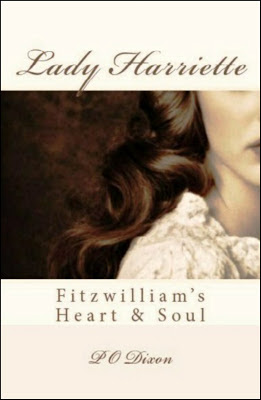 As the story goes in To Have His Cake (and Eat It Too) and its sequel, What He Would Not Do, Colonel Richard Fitzwilliam enjoyed making light of his younger cousin Fitzwilliam Darcy’s deep affection for Miss Elizabeth Bennet in what seemed destined to be an unrequited love. After Darcy won Elizabeth’s heart and made her his wife, Richard continued his wont of taunting his love-sick friend.

Now, the proverbial shoe is on the other foot. It’s Darcy’s turn to make light of Richard’s struggles to prove himself worthy of pleasing the woman in his life. Can Richard stay true to his purpose or will the worrisome winds of ill fate intervene?

After his father threatened to cut him off financially for what the Earl of Matlock deemed his son’s debauched, heedless way of life, Colonel Richard Fitzwilliam set his cap at young Lady Harriette Middleton. A second son whose habits of taste demanded he marry a woman of substantial means, Richard’s sole intention was securing her dowry. Having entered her bedchamber under the cover of darkness, he set upon his course. He promised to court her, to win her heart, to marry her.