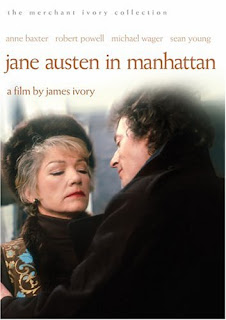 I so wanted to watch  this film and  now my disappointment is undescribable. On one hand, I’m glad I saw it because I had heard about it and it was one of the few Austen-based movies I had never seen.  But I even added it to my DVD collection and that is …too much,  I think: definitely not worth re-watching.
In this Merchant Ivory ‘s   absurdist “romance” Jane  Austen in Manhattan (1980, U.S., 111 minutes),  past meets present and flamboyant egos collide as two modern-day theatre companies compete to stage a literary gem:  a lost play by one of Britain’s best loved authors. This film tries to blend the artifice of Jane Austen’s 18th century charming creation, tracing the seduction of an innocent  girl by a devious rake, with the thrusting , ambitions  and sexual  mores of 1970s New York. The result is one of the quirkiest and most bizarre movies I’ve ever seen. 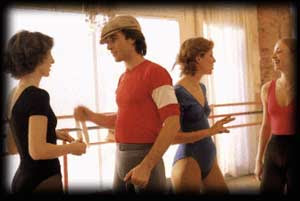 The two theatre companies , anxious for the kudos of giving the play its world premiere, must vie with each other for the theatrical rights, which are owned by an artistic foundation. One is led by the traditionalist  Lilianna Zorska (Anne Baxter), the other by her former protégé and lover , charismatic Pierre (Robert Powell) who runs an avante-guarde off-Broadway troupe. Complicating this situation is Ariadne (Sean Young) a beautiful young actress Pierre is determined to seduce away from her husband, Victor (Kurt Johnson) . Modern day events begin to mirror the themes of seduction and salvation in Austen’s play as Lilianna strives to thwart Pierre and save Ariadne from his clutches. 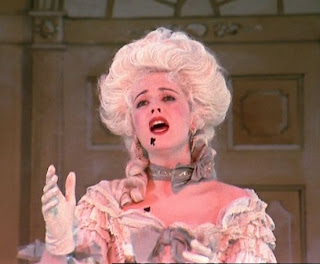 The inspiration behind Jane Austen in Manhattan lies in an actual event: the sale at Sotheby’s  in London of the manuscript of a piece of Jane Austen's  juvenilia, a play based on Samuel Richardson’s SIR CHARLES GRANDISON. The manuscript was passed to Merchant Ivory Production. Although the company considered the play too slight to warrant a production of its own, it was deemed  ideal material as a “play within the play”.
They missed a good occasion, I think. The idea of the play within the play was not bad at all. But I would have set the story in Jane Austen’s house with her and her family home-staging this short play. Not that original but a good chance for a good costume film. James Ivory has a wonderful period film among his credits, “A Room with a View” , based on E.M. Forster 's novel. I love that adaptation. So maybe that was what I was expecting from him as a director and, not finding a bit of that poetry an beautiful photography,  I felt sort of betrayed.

This is my third task completed for the Everything Austen Challenge II
hosted at Stephanie's Written Word
Posted by Maria Grazia at 23:26

Maria, I always wanted to see this movie. Unfortunately, I couldn't find it here in Brazil. Can you allow me to translate your post and publish it at JASBRA's blog? Thanks,

I've never heard of this one, but too bad it was so disappointing!!

I remember it very badly, I didn't like it. It was boring and with so much wasted potential. I mean, you can try to make a play within a play, but in a more imaginative manner. Just take 'Looking for Richard' as example.
My partial thoughts (I will link the complete ones when I update our site, if I ever do it!) here:
http://janeausten.mforos.com/1424228/7684505-jane-austen-en-manhattan/#76650194

Sounds disappointing! I've never come across this one and don't think I will go out of my way to find it! Thank you for your honest review!

Too bad! I log Room with a View too. It's one of my favorites. If I can get it through Netflix, I definitely watch just for the sake of it, but I wont saddle myself with a copy. Thanks for the review!

I should say only that its awesome! The blog is informational and always produce amazing things Negan Jacket

This is the first time that I visit here. I found so many exciting matters in this particular blog, One thing I would like to request you that pls keep posting such type of informative blog.

The Last Of Us Part 2 Ellie Backpack

I appreciate this blog your blog is vert help full for me i really enjoyed this stuff dude.

The Last Of Us Part 2 Ellie Backpack

Thank you for this great contribution, I find it very interesting and well thought out and put together. I hope to read your work in the future.
Sex Education Jacket

I am very happy to read this. This is the kind of manual that needs to be given and not the random misinformation that’s at the other blogs. Appreciate your sharing this best posting. The effort you made to share the knowledge. This is really a great stuff for sharing. Keep it up . Thanks for sharing.