MURDER SHE WROTE… AND NOT ONLY! 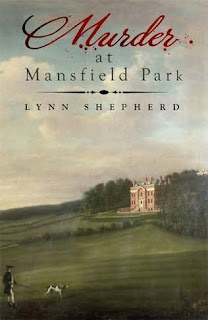 
1 star for helping me get rid of Fanny Price. Why I have never liked her much, I’ve never really been able to explain (though I tried here and here) , but now I know. I had always suspected she hid “something”
1 star for making Fanny and Mary Crawford rivals again but with … different results
1 star for Lynn skillful hold of Austen-like language which resulted in a greatly enjoyable style
1 star for the many unexpected twists and surprising turns (especially the final unveiling of the mystery)
1 star for the Agatha Christie- style investigation
Very well drawn and very pleasantly written Lynn Shepherd’s Austen- inspired murder story is a perfect summer read I heartedly recommend both to Janeites and to the lovers of good old-fashioned detective stories from the classic tradition . In fact, Murder at Mansfield Park takes Austen’s masterpiece and turns it into a riveting murder story worthy of PD James or Agatha Christie. If Jane Austen would have turned to murder stories she might have written something like this. 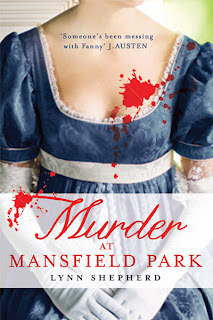 The most pleasant surprise is the heroine of Shepherd’s novel, Mary Crawford. She  is self - confident, intelligent, witty as well as brave and resembles Elizabeth Bennet more than herself in Austen’s original novel. What of Fanny Price in this book, instead ? I don’t want to reveal much so as not to spoil your own pleasure at discovering the many intriguing devices which keep you guessing until the very last page . But I think I can tell you what follows without spoiling your future  pleasure : Lynn Shepherd shaped her Fanny according to what Kinglsley Amis wrote in an article originally published in The Spectator in October 1957 (“What became of Jane Austen”?) . In that article Fanny is defined as a “monster of complacency and pride, who under a cloak of cringing self-abasement, dominates and gives meaning to the novel”. So, can you guess? Neither Mary nor  Fanny are quite what we all believed them to be reading Mansfield Park.
I remember our discussion about Jane Austen's Mansfield Park at the public library last April  . Our group readers were quite convinced that the proper matching for the characters in the novel was Henry Crawford /Fanny and Mary Crawford/ Edmund . They didn’t quite like Austen’s decision to make Edmund and Fanny marry in the end, they found it an unsatisfactory ending. Moreover, apart from the two kind more mature ladies in the group, all the young readers preferred Mary to Fanny. It seems Lynn Shepherd knew about our wishes while writing. Well, we are only a small sample  of Jane Austen's contemporary audience and I'm sure  there are, of course, different opinions on Mansfield Park among the huge number of Janeites,  but I’m sure the majority would like this novel very much and find it  more playful and  even lighter than the original.
An interesting change respect to Jane Austen's novel is the relevance Lynn Shepherd gives to servants, maids and  Mansfield Park  staff  in general.  O'Hara, Mrs Baddeley or Polly Evans are minor characters but not bit players and they have an active role in the plot and in the solution of the mystery. 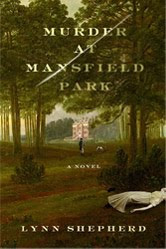 More than Edmund or Henry Crawford the hero in this murder story is Mr Maddox, the thief taker employed by the family  to investigate on the mysterious murder at Mansfield. His unpleasant manners, smart deductions, overwhelming will make him the real male protagonist of this novel. He hides his passionate heart and even his knowledge and education behind his rude ways. Guess what? I’d like to see him in action in a new adventure. He deserves more. I hope Lynn Shepherd doesn't want to discharge him after his brilliant contribution to her first novel.
As I wrote in the title,  the murder case/s are not the only interest in the book. You’ve got in fact the entire range of Austen’s main themes such as  family life, life in the country, marriage, elopment, gossip, love and the unfailing happy ending .
So, if you like me have always put Mansfield Park away with a certain unsatisfied feeling in the end, I’m sure you’ll love what Lynn Shepherd did of its plot and protagonists in full respect of the Austenesque tradition. Toward the end she writes: “Everything was clear to Mary now: even the smallest elements of the riddle had found their true place”. This is the impression I got once I closed the book at the last page,  everything and everyone had found their own place in Lynn Shepherd’s work.
Posted by Maria Grazia at 17:59

Great review -- I'm so getting this stat. I wouldn't say I'm a Mary Crawford fan girl, but I definitely feel some sympathy for her -- so it'll be fun to see her as the heroine!

Wow! Fantastic review, Maria! I didn't think it was possible, but I want to read this book even more, now! I'm very intrigued about Mr. Maddox! Sounds like an interesting character! Glad you enjoyed this one!

After taking a look through your blog (which I love) I think you'd really like a Jane Austen inspired reading challenge I am hosting over on my blog called Jane Austen is my Homegirl :) The challenge is going to involve some great giveaways, and opportunities to share your Jane Austen reviews with others and really get your blog noticed! Here is the link if you are interested... http://thebookbuff.blogspot.com/p/jane-austen-is-my-homegirl-reading.html

I'm so glad to learn how much you enjoyed this! I have a copy in my TBR pile but haven't opened it yet. I must admit that some of what you say makes me feel a bit reluctant to finally crack the cover - I'm one of those rare reader who adores Fanny and despises Mary (actually, I'm not too keen on Edmund either, who I think not nearly good enough for Fanny). I've read other books that try to "correct" the pairings Austen gave us and they kind of make me want to scream. I hope my own preferences and prejudices do not impede my enjoyment of the story.

@Alexa Adams
Well, Alexa, like you Laurel Ann is a huge fan of Fanny. Have a look at her review of this novel at Austenprose. She gave it 5 stars!

I'm interested in reading this too. It's now on my Kindle and I'm looking forward to it. I have to say, I'm not a big Fanny Price fan so it'll be a fun read since I won't be offended at the plot. :)