Moving back and forth between Cassandra’s time at the Kintbury vicarage (1840) and the vivid recollections of her shared years with Jane, you’ll experience both the promise and romance of youth and the hard-won wisdom of experience.

Miss Austen  will not only delight Jane Austen’s fans and expand their understanding of her exceptional family, but it will also introduce new readers to her world through a fascinating, and at the same time honest,  portrayal of Jane. They will know her through the eyes of the person who loved her most, her sister Cassandra.


The author relates to Cassandra Austen

The author,  Gill Hornby, incidentally, lives in Kintbury, where most of the story takes place. Moreover,  she is no stranger to being overlooked for famous relatives, being the sister of British novelist Nick Hornby and the wife of Robert Harris. She declared that she is used to playing second fiddle and wanted to give Cassandra her due.

"We live in a culture of genius, " she said in an interview,  "but I’m always interested in people who support the genius."

“Cassandra was capable, understood Jane, managed her and can take a huge amount of credit for the existence of the novels.”

This is why she came to write a novel dedicated to Jane Austen’s sister, Cassandra. And apparently, she was really inspired by her story because it is so beautifully written! 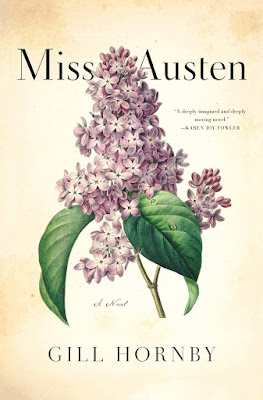 Whoever looked at an elderly lady and saw the young heroine she once was?
England, 1840. Two decades after the death of her beloved sister, Jane, Cassandra Austen returns to the village of Kintbury and the home of her family friends, the Fowles. In a dusty corner of the vicarage, there is a cache of Jane’s letters that Cassandra is desperate to find. Dodging her hostess and a meddlesome housemaid, Cassandra eventually hunts down the letters and confronts the secrets they hold, secrets not only about Jane but about Cassandra herself. Will Cassandra bare the most private details of her life to the world, or commit her sister’s legacy to the flames?
Moving back and forth between the vicarage and Cassandra’s vibrant memories of her years with Jane, interwoven with Jane’s brilliantly reimagined lost letters, Miss Austen is the untold story of the most important person in Jane’s life. With extraordinary empathy, emotional complexity, and wit, Gill Hornby finally gives Cassandra her due, bringing to life a woman as captivating as any Austen heroine.

The mystery of the letters

It is a matter of family record that, in the last years of her life, Cassandra Austen looked over the letters that she and her sister had exchanged. All those she found too open, improper or too confidential – the majority of them, apparently – she decided to  burn. Sadly, we have many letters that Jane wrote to her sister, but none of Cassandra’s replies.
There are many letters signed Jane Austen included in the novel, but they are all entirely imagined.

Cassandra has always been slightly unpopular among the readers and scholars of Jane Austen’s life.  It is probably due to the fact of her burning Jane’s letters, but it is also a consequence of Jane’s premature departure according to Gill Hornby, which turned Jane into an ideal figure. Then she adds:  “Those who die young will always be remembered more favourably than those who grow old. And the celebrated, the successful will always have the edge of the many whose lives are quieter and merely good.”
Gill Hornby recreated Cassandra from the clues that Jane Austen left us in her letters. It is clear that Jane didn’t find her cold or difficult to like. And that is what we find in this novel: Cassandra is generous, caring, selfless   but she’s also an intelligent and strong-willed heroine.


Gill Hornby is the author of the novels The Hive and All Together Now, as well as The Story of Jane Austen, a biography for young readers. A devoted Janeite, she lives in Kintbury, England, with her husband and their four children

I've read Steven Coogan’s production company has secured the rights of the book so it is set to become a major TV drama and this makes me super excited! Now who might be cast as Cassandra, Jane, Tom Fowle and, especially,  Mr Hobday? I’m really looking forward to hearing about the casting and, of course, to watching more Austen-inspired period drama on TV.

Check the book at amazon.com
Posted by Maria Grazia at 12:20

The storybook is really amazing for who those love to reading and writingmany people want to busy in different activities especially retired people they want to do anything for entertainment and the reading is the best idea and this type of people also trying to cook some new and delicious to their family.but some people also does own their personal work and but no one can make strong coffee but french press coffee makers is the best solution for this type of personal because the machine are made fantastic coffee in a minutes.

I've read this book and I really like it. The author's writing skills are so amazing. Now it's time to avail Live Chat Services for more information.