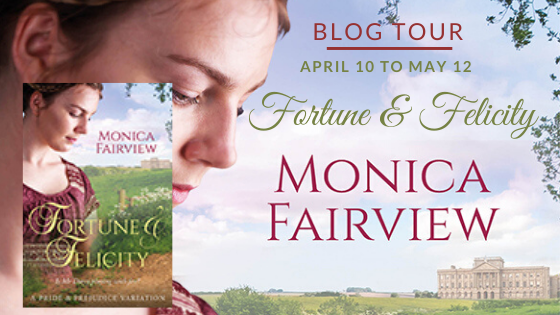 Jane Austen’s P&P is an amazingly rich novel with so many aspects to it, and the adaptations have done a fantastic job of bringing the novel to life. You have the central romance, of course – and who doesn’t love the sparks between Darcy & Elizabeth – but you also have so many other aspects to it. You’ve got the setting, with all the gossip, the walks, the village, the militia, the Dances. Then you’ve got such a variety of memorable characters, from Mrs. Bennet and Mr. Collins to Lady Catherine de Bourgh and Miss Bingley. It’s treasure-trove for a creative mind, so many pretty baubles to admire. It’s irresistable in fact.
So, as a writer, I’m allowed to play with them all.  There’s so much there, so many different directions to take. I just wish Jane Austen was here to see what she’s started!

The premise to your new novel is quite intriguing: Seven years after Darcy’s disastrous proposal, Darcy is in need, not of a wife, but of a governess for his young daughter. Imagine his surprise when he discovers Elizabeth Bennet!  How does that happen? How have you come to imagine Elizabeth as a governess to Darcy’s little daughter?

In P&P, Elizabeth is very defiant. A lot of the novel is the conflict between her view of herself as Darcy’s equal, and Society’s much stricter view of her social status. I was watching Jane Eyre, and I asked myself – what if Elizabeth was in Jane Eyre’s position? What would she do? The novel isn’t at all based on Jane Eyre, but the concept intrigued me.

How embarassed is Elizabeth when she realizes she has to work for the man she rejected in the past? It mustn’t be easy for her …

It’s intensely humiliating. Their encounter when she goes for an interview is so horribly awkward. I kept thinking – if that were me, I wouldn’t be able to go through with it. But then, Elizabeth always rises to a challenge.

Which is the scene you had more fun to write?

There were several fun scenes. Fortune and Felicity does have some very light moments, although it’s more serious than my usual novels.  My favorite has to be an outdoors scene when Darcy and Elizabeth meet while she is out walking. I loved writing that one. If you read the book, you’ll see why.

I was just wondering, who do you envisage while writing your Elizabeth and your Darcy? Colin Firth and Jennifer Ehle? Matthew McFadyen and Keira Knightley? Totally different characters you figure out in your mind?

I used to imagine Colin Firth and Jennifer Ehle in my early books, but I abandoned that idea a while ago because I found it made my Darcy character too stiff. I’m really into fantasy, and I cringe to admit this, but for some reason when I imagined Mr. Darcy this time, I was thinking of Henry Cavill as Geralt in The Witcher. I didn’t base Mr. Darcy on him, but he kept popping up in my mind. This is really embarrasing, because he couldn’t be more different than Mr. Darcy, but I did love the show. And I suppose both of them are very reserved people who don’t say much. Not much of a comparison, I know. 😊 For anyone who’s watched The Witcher, do you think there are any similarities?

For Elizabeth, I didn’t have a clear model, but sometimes I imagined Jessica Brown Findlay as Lady Sybil in Downton Abbey. She has that kind of defiant personality, and she refuses to be intimidated by anything.

Are all the other characters from Pride and Prejudice returning in your variation? Can you give tell us something about them?

I usually love to have a large cast from Pride and Prejudice in my novels, because I love to see more of them, but this book is unique in that very few other characters from the original appear here. Georgiana definitely makes an appearance, and I loved writing her character here. She’s matured and developed and I really like what she’s become. Mrs. Reynolds has a role to play, and Jane, to a certain extent.
Fortune and Felicity is a bit of a departure for me, and I was a bit surprised, but that’s the way it worked out.

Which character/s do you enjoy writing the most?

I like all the comic characters, of course. Like Mr. Bennet, I like to make sport of them, just a little bit. Mrs. Bennet is my favourite, because I can indulge my love of the hestrionic. I did love writing Miss Bingley’s story in The Other Mr. Darcy, my first novel.

If you could write a mash-up story, which Austen hero and heroine from two different novels would you like to create a love story for?

I think I’d like to write an Emma mash-up with Henry Tilney instead of Mr. Elton. That could be fun. I wonder who she’d end up with?

Are you ready for a new Pride and Prejudice TV adaptation? Apparently they (Mammoth Screen) are going to shoot a new darker version soon.

Yes, I’m ready for any adaptation, in any shape or form. I can’t wait! I can’t imagine it would be darker than Pride & Prejudice and Zombies, though.

That’s all for now. Thanks for taking the time to answer my questions and good luck for your Fortune & Felicity blog tour!

It’s really a pleasure. I do love answering your questions. I keep coming back for more! Thank you, Maria, as always, for such a fanastic opportunity! 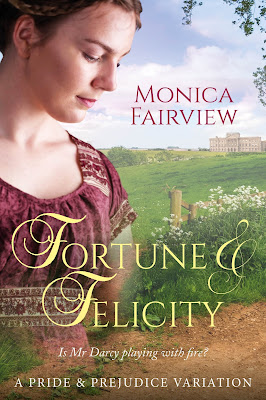 In this Pride & Prejudice variation, Elizabeth and Darcy have a second chance to get things right. Will they be able to come together this time, or will pride intervene yet again?

Seven years after Darcy’s disastrous proposal, Darcy is in need, not of a wife, but of a governess for his young daughter. Imagine his surprise when he discovers Elizabeth Bennet on the list of possible candidates provided by the employment agency. The question is, should he take her on as a governess, or would he be playing with fire?

Elizabeth Bennet is forced by her reduced circumstances to take on a position. However, when Mr. Darcy invites her for an interview, she is embarrassed and humiliated. How could she possibly live under the same roof as the man she had rejected so strongly seven years ago?
Whatever decision she makes, there will be a high price to pay… one way or the other.

Monica Fairview writes Jane Austen variations and sequels. After graduating from the University of Illinois, she worked as a literature professor and then as an acupuncturist in Boston before moving to London.

Monica loves anything to do with the nineteenth century, and obsessively follows every period drama she can find. On rainy days, she loves to watch ‘Pride & Prejudice’ (all adaptations), ‘North & South’, ‘Cranford’, or ‘Downtown Abbey’.

Apart from her avid historical interests, Monica enjoys reading fantasy and post-apocalyptic novels, but avoids zombies like the plague. She loves to laugh, drink lots of tea, and visit Regency houses, and she is convinced that her two cats can understand everything she says.

a Rafflecopter giveaway
Posted by Maria Grazia at 10:20

Thank you, Glynis, glad it's on your wish list. <3

This book is so intriguing and I can't wait to find out what happens. With their increased years, hopefully Elizabeth has matured and will not be so opinionated and Darcy less proud. Good luck with sales--you deserve it!

Great interview! I’ve loved all of your books, Monica, and I can’t wait to read this one. Thanks for the chance to win a copy!

Thank you, foreverHis, for your kind remarks, and for following the story on Austen Variations. :)

I think you'll find it is quite different, Patricia.

Hello Pam, thank you!! I'm very happy to know you've read all my works!! You made my day. Good luck with the draw!

Yes, I imagine Elizabeth’s interview must have been very awkward. Is it terrible that I look forward to reading that scene.

I don't think so, Darcy [lovely name!]. It is a painful scene but it's very crucial.

If you'd like to get a start on the novel, I have some chapters up on Austen Variations. Here's the link to the Prologue: https://austenvariations.com/excerpt-fortunefelicity-monica/

Thank you for tbis interview.Of course we all do admire EB, but such a character to be humbled like this and in front of the man you refused. All for herself and her family. Eagerly awaiting its release

Thank you, Buturot. It is a difficult moment, but hopefully ;) she will be able to rise above it, as Lizzy always does.

Great questions and so interesting to hear your thoughts on them. Thanks for sharing! I'm excited to read the entire story, but now I'll definitely be looking out for your favorite (walk) scene!
I am watching The Witcher, but have only finished through episode 3. I guess Darcy similarities so far may be: tall, scowls, explains nothing, doesn't want to be involved but does anyway :)

Thanks, NovElla. It's a general concept, rather than specific, but it was hovering somewhere in the background....

Deborah, yes, those are some overall qualities the two have in common, but maybe you'll discover more. Let me know what you find. I love The Witcher. It grows on you as you continue.

I suppose it's also the Henry Cavill effect, not just in the witcher. I think he'd made a really good Darcy.

Oh boy, does that mean that Darcy's wife is still alive? That definitely going to be interesting. Can't wait to read it!

I won't be giving anything away if I tell you that Mr. Darcy's wife is most definitely *NOT* alive. You can read sample chapters on Jane Austen Variations to give you a hint of what happens.

I'm intrigued by the premise of this upcoming new release, Monica. I wonder if Mr Bennet had died for I don't think a gentleman's daughter would look for a job if her father was still alive. And who could Mr Darcy's wife be? I hope she is out of the way so Elizabeth and Darcy can be together.

Hi Lúthien. Yes, Mr. Bennet has died. Can't give away more than that. ;)

best assignment help websites in UK is growing quickly by helping students in a range of subjects that come from varied backgrounds out of class universities Assignment and We are serving its customers with scholarly assignments. best assignment writing service
Best Assignment experts