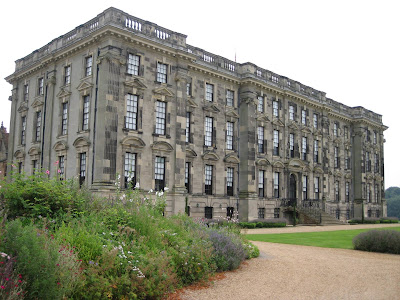 When I visited Stoneleigh Abbey about five years ago I discovered a story just waiting to be written. So many people think Jane Austen was middle-class but in fact she was only a generation away from a Baronetcy and her ancestors had been very wealthy.

So the story I discovered was that in June 1816 Jane moved from a property in Trim St, Bath, the poorest residence she lived in, which she never mentioned again, to then stay in the dramatically ornate, vast, residence of her ancestors, where she came face to face with their portraits and no longer needed to imagine the way they had lived.

Jane actually describes aspects of the area around Stoneleigh Abbey and rooms within Stoneleigh Abbey in Pride and Prejudice and in Mansfield Park.
When I stood in the entrance hall in Stoneleigh Abbey five years ago it did not take much to picture Jane Austen standing in that room, looking everywhere, and from that to imagine her character Fanny’s voice coming from such a visit. And then I learnt about the portrait of one of Jane’s relations whose real story was ridiculously close to that of Persuasion, and her surname is Wentworth.

I visit lots of historical properties, it’s how I generate ideas for my historical books - to learn true stories and scenes and then apply them to my fiction to make my fiction feel more realistic. So it became very obvious to me that Jane Austen had used fact to help create her fiction… 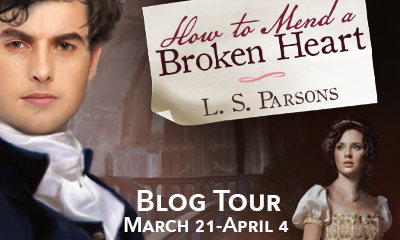 Thank you, Maria Grazia, for having me here at My Jane Austen Book Club and allowing your readers to have a glimpse of my new book – my first and only book so far.
Years ago when I began this story, I did it in response to a story I had read that had haunted me for weeks after finishing it. The story in question is A New Leaf by Teg. In her story, Darcy marries another lady and Elizabeth is left on her own. Needless to say, Darcy and Elizabeth did not have a happy ending which left me unfulfilled and unhappy. I emailed the author and asked her if she had plans to rewrite with an alternate ending. She said she did not, and that gave me the idea for How to Mend a Broken Heart.

For my peace of mind, I set about to concoct a story to satisfy my need for a happy ending for Darcy and Elizabeth when the obstacle of an engagement to another stands between them. While there is the angst of the original story, the reader will be left with a much more satisfying ending. This current version has been reworked and has evolved from the story which I posted online years ago.
The story depicts the need of a man to rectify a mistake he made years ago by not properly courting the woman he loves which led to his broken heart. The fact that he is now engaged to be married to someone other than his one true love stands in the way of mending by his heart and winning the heart of the woman he had thought he lost. This is the story based on the characters from Jane Austen’s Pride and Prejudice, Fitzwilliam Darcy and Elizabeth Bennet.

WHY DO I LOVE JANE AUSTEN... BY BEVERLY FARR AKA JANE GRIX + GIVEAWAY

No seriously, I love Jane Austen for more than Mr. Darcy, although he is a big part of why I adore her books.

I like her books because they are funny and romantic and they contain fascinating side characters and insightful commentary on human nature.

My favorite novel of all time is Pride and Prejudice.  In this story both hero and heroine are flawed.  Elizabeth is clever, but she is quick to judge.  Darcy is intelligent, but arrogant.  Some might dismiss this story as a Cinderella story because Elizabeth ends up with Darcy, who is rich, but in this story the Prince (Darcy) actually changes and becomes a better person by the end.

When Elizabeth refuses his first offer of marriage (very unCinderella-like), he is humbled.  But then he writes a letter that makes her realize that she has been judging him harshly.  So they both change for the better, then they deal with foolish/obnoxious family members (Darcy rescues Lydia and Elizabeth stands up to his aunt Lady Catherine) which shows the reader that they deserve happiness.  And finally, they speak up, taking an emotional risk to declare their feelings and they are rewarded with a great, lasting love.

BLOG TOUR & GIVEAWAY: A SEARING ACQUAINTANCE BY J.L. ASHTON. READ AN EXCERPT AND WIN A COPY! 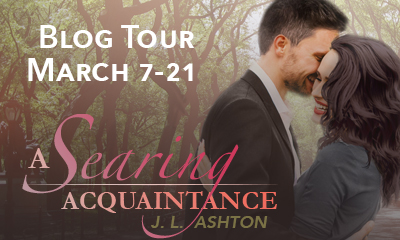 “I don’t know why I ever thought we made sense.” 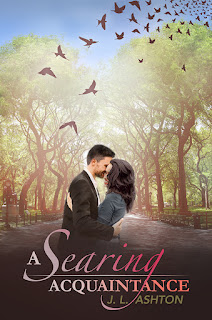 Smart, educated people are fools in love, especially when they’re mired in denial and misunderstanding.
In this modern spin on Jane Austen’s classic tale, Elizabeth Bennet, a grad student with literary aspirations, has found her big career break—and broken up with yet another forgettable boyfriend. While grateful for the professional lifeline thrown by sports agent George Wickham, she is intrigued by the man she calls Mr. Noir.
Fitzwilliam Darcy, marked by tragedy, is a man accustomed to living his life in the spotlight even as his heart dwells on the dark side of loneliness. When he first meets Elizabeth, he thinks she looks like “a bloody pumpkin,” but he soon sees so much more. She, however, can’t even decide what to call him. Mr. Noir? Nurse Darcy? Sleazy British playboy? Ferdinand?
“So, it’s Fitzwilliam, right? That’s an amazing name, you know. Which came first—the name or the accent?”
He looked at her.
“Oh, come on. It’s like the name of a subdivision or a sofa at Pottery Barn. `Please note the extra firm cushions on The Fitzwilliam.’”

Mr. Collins is a dreadful bore, with his long speeches and his constant apologizing.  He’s a wretched dancer and a ghastly whist player.  He is completely obsessed by his one true love – his relationship to Lady Catherine de Bourgh.  I admit that I would not want to spend many evenings with him!

Still, there are qualities to admire in Mr. Collins, and I think they should be acknowledged.

First, he is a peace-maker.  Obviously there was some quarrel going on between Mr. Bennet and Mr. Collins’s father.  We do not know the grounds for the quarrel, but it had gone on for years.  Probably it was the fault of the senior Collins, as our Mr. Collins said he was always uneasy about it.  At any rate, when his father dies, he takes the first step and writes a letter to Mr. Bennet.

Second, Mr. Collins does his best to make amends.  He resolves to marry one of his cousins, thereby making sure that they will be cared for when their father dies.  Now, he was certainly influenced by the fact that he had been told to marry by Lady Catherine, and the Bennets had a family of five daughters who had reason to welcome him.  Even though he points out that there are many eligible young ladies in his neighborhood, we later learn that most of his neighborhood live rather high, so his cousins may have been the most eligible set of ladies available to him.  He promises to Elizabeth that he would never reproach her for her lack of funds (which is more than Darcy does in his first proposal).  Even though his affection for Elizabeth may be imaginary, his proposal is generous and honorable. 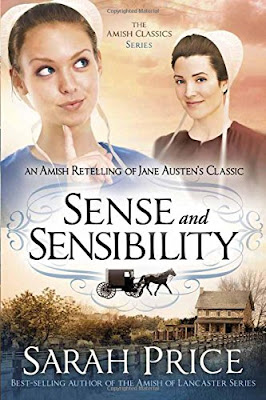 On March 1st, my book, Sense and Sensibility (Realms, 2016) is released! This adaptation of Jane Austen’s book by the same title is a bit different than others you may have read for it is not set in England or during the 1700s. Instead, it is set in present day Lancaster County, Pennsylvania.

Why Lancaster County? you may ask. And isn’t that where so many Amish lives? How could that possibly relate to anything Jane Austen wrote?

That’s right…the Amish live in Lancaster and that, indeed, is the setting for my adaptation.

You see, in my version of Sense and Sensibility, the main characters are not the upper echelon of high society during the Regency period. Instead, they are simple Amish people. The two main characters, Eleanor and Mary Ann do not live on a fancy estate with servants to tend to their needs. Instead, they live on a dairy farm. When their father dies, they (along with their mother and younger sister) are not just removed from authority of the property, they are also relegated to the small grossdawdihaus by their half-brother and his wife who, subsequently, treat them like second-class citizens and make their lives miserable.

One of the things that I love the most about Jane Austen’s novels is that she presents timeless themes that readers have all experienced-one way or another-throughout the course of time.  How many times have we tried to set up friends only to realize that it won’t work? How often do we form judgments about people only to later realize that we were blinded by our individual bias? Haven’t we all been persuaded to do something by family or friends, even though we really wanted to do something else?
Read more »
Posted by Maria Grazia at 14:00 5 comments: