I immediately pinned it to my The Perfect Gentleman inspo board on Pinterest and just as I did so, my email program pinged with an incoming email from one of the Q & Q publishers, sending me a link to—you guessed it, the exact same cover.

With fate so proficiently assisting the selection process, the rest was easy.

The back cover also has its story. The Perfect Gentleman’s entirely fictional (of course) Elizabeth Bennet is a talented artist, lacking only education and opportunity to achieve greatness. Her quest to become all she can be is a major plot point of The Perfect Gentleman, and her willingness to take risks and overcome challenges are part of what initially draws our Mr Darcy into her orbit.

Of course, we all know that Mr Darcy comprehends a great deal in his idea of an accomplished woman. I wanted to show that The Perfect Gentleman’s Elizabeth possesses that certain something more substantial, “of capacity, taste, application, and elegance united.” No artwork could be a more appropriate representation of true artistic accomplishment and achievement than the statue of A veiled Vestal Virgin by Raffaelle Monti. The statue was featured in the 2005 movie version of Pride and Prejudice in Pemberley’s fictional collection—unless of course, you despise the 2005 P&P movie version, in which case its claim to fame is a recent showing at Sotheby’s in New York City, as part of the exciting Treasures from Chatsworth exhibition. Either way.

The Vestals were virgin priestesses whose lives were dedicated to the goddess Vesta in ancient Rome. Their job? Tending the sacred fires burning on Vesta’s altar in her temple. They were regarded as fundamental to the safety of Rome. The discovery of a “House of the Vestals” in Pompeii in the 18th century made Vestals a popular artistic subject matter for many years thereafter, so it’s no wonder that the 6th Duke of Devonshire commissioned the one pictured on The Perfect Gentleman’s back cover from Monti’s studio in Milan.

It seems entirely fitting that A veiled Vestal Virgin—an artwork whose technique was so important to early 19th century sculptors and which is so beloved today by fans of the Regency period—should represent Elizabeth’s quest to become the very best artist of her time.  With instruction from her very Italian, very gifted, and very temperamental art master, will she be able to achieve such mastery?  Or will an anal-retentive, judgmental housekeeper and a nefarious villain combine to create a dangerous, even deadly situation, snuffing out her artistic ambitions before they can flourish?

What part does this beautiful statue play in Elizabeth’s story?  Will she achieve greatness only in death? I hope you will open these beautiful covers and find out!

’Tis no secret that Lizzy Bennet has dreams. The uniquely talented daughter of a woman with a dubious reputation, Lizzy knows she must make her own way in a world that shuns her. Fitzwilliam Darcy carries the stains of his family’s disgrace upon his soul and only by holding himself to the strictest standards has he reclaimed his
place in society.
Now Georgiana Darcy has gone missing. If his fifteen-year-old sister cannot be found quickly, the scandal could destroy Darcy’s years of perfect behaviour. Lizzy Bennet know just what to do to find Georgiana. She is willing to join the pursuit to get what she wants but will Darcy be willing to trust her with his secrets? And what will they do when the search for Georgiana reveals what neither expected to find?

Pre-order the book at Amazon

You can win a $20 Amazon gift card from Quills & Quartos Publishing! The contest ends on October 21. To be eligible, just join in the conversation below. 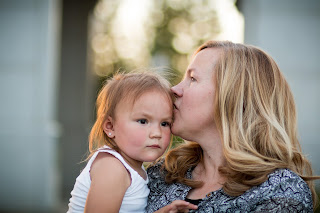 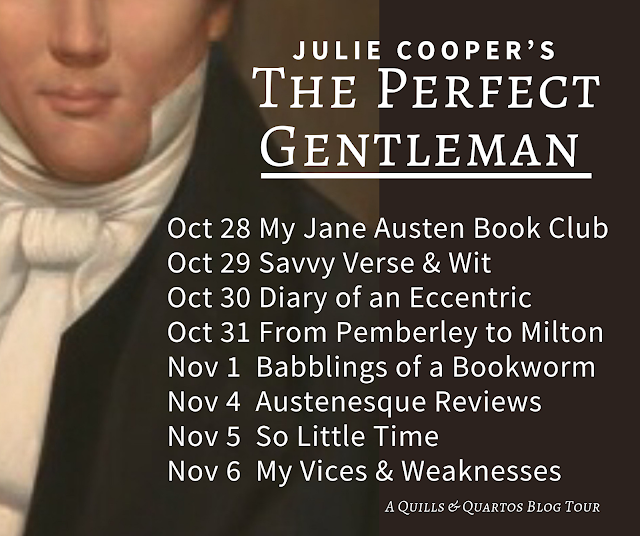 What a beautiful cover!! Congratulations on your first published book, Julie!

Beautiful Julie! I am so happy you are publishing your wonderful stories! xxxooo

We are so excited to be releasing the first of Julie's many wonderful stories! This book has a bit of everything JAFF readers love -- adventure, a strong heroine, a brave and heroic Darcy and most of all ROMANCE!

Love the cover, but I wonder who the perfect gentleman is that the title refers to, it certainly cannot be Darcy

I look forward to reading this. I think this is the most gorgeous cover YET to come out of Quills & Quartos. Stunning!

Looks like it should be an interesting read and the cover is gorgeous! Just pre-ordered it!

A lovely cover for what is sure to be an even lovelier book - congratulations on publishing, Julie!

What a fantastic cover! And the story behind finding it adds something special. Can’t wait to have a read!

Thank you everyone for your kind words!
And I appreciate the pre-orders more than words can say!

The story sounds sinterwsting. The cover is very pretty.

A beautiful cover! Interesting excerpt. I cannot wait to read this book.

Love all your stories! Congratulations on publishing! Amazing cover!!

So, so excited, Julie! The cover looks great and the statue on the back is perfect!

So excited to see this story published , especially with such a beautiful cover!

A lovely cover. Congrats on the release!

Love the cover. Book blog drew me in. Thank you for now I’m going to go and see if I can preorder

Beautiful cover. Thank you for the background. The plot sounds intriguing.

It's so awesome to see everyone's support!
Kindle pre-ordering on Amazon is available now, and I hear they will have hard copies incoming soon.

Nice cover. Best wishes on this book. Can't wait to read it 💕

It is a truth universally acknowledged that The Perfect Gentleman has the perfect cover. :-) Congratulations on your book!

N-I-C-E cover photo. Undoubtedly a good story as well. I look forward to reading it.

Such a beautiful picture and the story sounds interesting too :D

Gorgeous cover. I read this some time ago on the boards...so excited for the published version! Good luck!

I love your comments!
Yes, this book has gone through an extensive editing process and professional proofing to polish it up for public consumption.
Thank you for the encouraging, kind words - they are all much appreciated.

Beautiful cover! Your premising is intriguing. I'm looking forward to reading more and following the blog tour. Congrats on your upcoming release!

I love the speeding carriage! What a lovely cover, and such an intriguing story line. Definitely adding this to my TBR list!

Love the cover! I look forward to reading. Congratulations!!!

The cover is enticing. I expect the innards to be very enjoyable. You do have a reputation for good stories to continue, after all. Thank you.

So happy you're liking the cover! Thanks for Every. Single. Comment.
Y'all don't know how encouraging you are, and how appreciated.
Julie

Dear Julie, I love all your stories and I am delighted to see that you started publishing your works!! I read The Perfect Gentleman some time ago and I am proud to finally be able to have one copy of the official published version. The cover is outstanding as well as the book!! Congratulations!!

Congratulations Julie on your new book.Love your cover (and your family pics in your Amazon site).

Eager to know/learn what happened with GD and how FD and Lizzy's feelings develop. Will FD think of Lizzy being a little odd because of her talent?


Can't wait to read it

Oh, those pictures on Amazon Author Central! Amazon asks you to post pictures about "who you are"...(I think they *really* want those pics of you summiting Mt Everest and bungee jumping off the Navajo Bridge. But whenever I answer those "Who Am I" questions of myself, the words Mother, Daughter, Wife, Grandmother, Aunt, and Sister are the ones most important to me. But, hey, as soon as I capture myself white water rafting in the Rocky Mountains, I'll post that one too. Say, anyone out there good at Photoshop??

A very beautiful cover art, Julie. The blurb is intriguing and I would love to know more about this novel. Congrats to you!

You have a beautiful cover for what promises to be a delightful story. I look forward to it. Thank you.