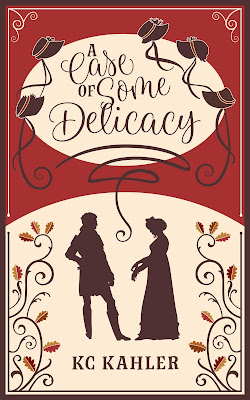 A Case of Some Delicacy is a fun romp with the characters you already love, and a few new ones you’ll come to love. All of the Bennet sisters play roles in the altered events in Hertfordshire, some of them in surprising ways. Eavesdropping abounds, secret partnerships are formed, matchmakers and matchbreakers run rampant, and general hijinks ensue.


This scene takes place during a picnic hosted at Longbourn. Elizabeth has sneaked off to her father’s library to confront him about the expectation that Jane will marry Mr. Collins. Mr. Bennet refuses to curtail his wife’s manipulations, and Elizabeth vows to interfere in the courtship in any way she can to save Jane from sacrificing her happiness for the family’s security. Mr. Darcy has overheard their entire argument through the open library window.


From Chapter 3
As Darcy hurried to make his escape, he berated himself for being so lax in his concealment. The angry Elizabeth he had witnessed was intoxicating enough, but the hurt, sad Elizabeth at the end of the confrontation had wreaked havoc within him. He had wanted to run inside to comfort her, to tell her how valiant she was in defence of her sister, how selfless she was to take such a burden on herself; yet he was unable to move—and then suddenly she looked straight at him! Blast!
And now he must return to Mrs Bennet without succeeding in his promised task. He sped along the path, his mind racing to come up with an excuse. Although he would not stoop to the indecorous act of running, Darcy thought he had the advantage of uncommonly long legs in combination with a head start. He had not bargained, however, on his sprightly pursuer breaking into a rather unladylike run herself.
“Mr Darcy! A moment, please!” she called out. Her voice was surprisingly close, and clearly angered.
He halted his hurried steps, endeavoured to school his features, and turned to face her. “Miss Bennet, how may I be of service?”
***
Elizabeth would have laughed at Mr Darcy’s breathless attempt at artfulness were she not so irate. “I have come to expect staring from you, but what can you mean by lurking about windows and spying on private conversations?”
He winced at the word “lurking,” but did not deny it. “My apologies, Miss Bennet. I—I,” he stuttered and paused. “Mrs Bennet sent me to fetch your father, and I was about to enter the house when I heard voices coming from the library window. I—you,” again he stuttered. “Your voice was raised and I was dumbstruck by the heat of the argument.”
A moment of silence passed as their eyes met.
Elizabeth flushed, embarrassed afresh with the confirmation that Mr Darcy had seen her at the height of her temper. “That is hardly an excuse!”
He looked away. Sighing, she continued, “Mr Darcy, though I am sure you are shocked at my impudence, you must have deduced the very delicate nature of the conversation you just witnessed.”
“I do grasp the delicacy of the subject matter, yes.” It looked as if he might say more, but he remained stubbornly silent.
“Can you have the decency, sir, to promise that you will speak of what you overheard to no other soul?” She decided to come right to the point, since Mr Darcy, though visibly flustered, was being his usual taciturn self. His dark eyes, which had in the past often been steadily trained on her in what she surmised was disapproval, were now anything but steady. They darted nervously between her face and the ground. He resembled a naughty boy expecting a punishment, and she was momentarily distracted by his fine features and endearing discomposure.
At length, he met her eyes. “Of course, madam, I give you my word. I would never dream of revealing it to anyone.” He paused, still holding her gaze. “In fact, I would rather offer to help you in your undertaking.” He looked amazed at his own words, as if they had fallen from another man’s lips.
“I do not understand your meaning.”
Suddenly they heard the excited exclamation of Mrs Bennet, “Lizzy! Where have you been, you irksome girl? Mr Darcy found you at last, did he?” She made her way toward them on the path.
Mr Darcy spoke quietly and quickly, “Miss Bennet, I wish to explain myself in a more private setting. I understand that you often walk out in the morning. How early do you go?”
Was he asking her to meet him secretly, alone? Elizabeth could hardly believe it, but curiosity and a bit of desperation urged her forward. As her mother’s yelling became louder, she haltingly answered, “In the immediate future I must take my walks very early indeed, around seven in the morning, so that I can return home before…certain members of the household awake.”
He seemed to catch her meaning. “And are there any particular paths you favour on a Sunday morning?”
“Lizzy! Come here at once! I will not be ignored any longer!”
Elizabeth answered in a hushed tone, “There is a path along Oakham Stream; you can reach it from the road about a mile from here.”
“I believe I will be able to find it.” Mr Darcy nodded and continued loudly, “And now I will fetch your father as promised. Thank you for telling me where I might find him.” He strode back to the house, leaving Elizabeth to deal with Mrs Bennet.
She shook off her confusion. “Mama, I am fetched at last. What do you require?”
“I require you to act as a gracious hostess to our guests! Wherever have you been? How can Mr Bennet hide in his library when he has duties as host? Am I expected to do everything myself?”
Knowing that none of these questions were anything but rhetorical, Elizabeth simply muttered apologies and proceeded towards the assembled guests.
“Just a moment, Lizzy,” Mrs Bennet demanded. “I insist you make an effort with Mr Bingley! Stop wasting your time on that dreadful Mr Darcy who does not find you handsome. Furthermore, you must keep Charlotte Lucas away from Mr Collins! She wants to steal him from Jane, I am sure of it.”
Elizabeth asked with some exasperation, “Mama, can you not see that Jane prefers Mr Bingley and Mr Bingley prefers Jane?”
“Of course he does. Who would not prefer Jane? That is why you must exert yourself. I know you can be charming when you so choose. Mr Collins will propose to Jane, and why should Mr Bingley not settle for you?”
After years of being unfavourably compared to Jane, Elizabeth endured the insulting speech fairly well. As mother and daughter returned to the guests, Mrs Bennet began, “Mr Bingley, what say you to a game of cricket?” 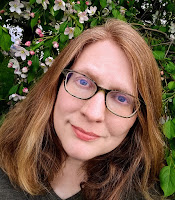 KC Kahler lives in northeastern Pennsylvania and works in online education, after having dabbled in sandwich making, bug collecting, and web development. She discovered Jane Austen fan fiction in 2008 and soon began dabbling in writing her own.

KC blogs about Austen and other pop culture topics. In 2015 and 2017, her popular Austen + The Onion Headlines meme was featured in The Atlantic, Flavorwire, and AV Club. In 2017, she made the requisite pilgrimage to Jane Austen country, where she took the waters in Bath, walked the lanes of Steventon, didn’t fall off the cobb in Lyme Regis, and stood awestruck in Chawton.

Giveaway
You can win a $50 Amazon gift card from Quills & Quartos Publishing! The contest ends on October 18. To be eligible, just comment on any of the blog tour stops. You need not visit all the stops (one point per stop and comment), however, it does increase your chances of winning by earning more entries.

Mrs Bennet is obviously deranged! And it seems that Mr Bennet isn’t much better? Luckily Darcy is perfecting his surveillance skills and is offering to help Elizabeth.
I like books where Darcy and Elizabeth work together against their adversaries so I’m looking forward to reading this one.
Thank you for sharing this excerpt. Loved it!

So happy Darcy is trying to help.

Mrs Bennet is as usual crazy. But I'm happy to see Dary is putting himself out there with Elizabeth. Thank you for the glimpse.

Congratulations on this book. I enjoyed Mr. Darcy's uncomfortableness. Now once Elizabeth has thought over his helpfulness, what will she think of him?

Thanks all! Mrs. Bennet is just single-minded and narrow-minded - she's not really a villain in ACoSD. She even has some sweet moments near the end. But it is hard to change her mind about who should marry whom, despite ample evidence that she's wrong.

There's lots of D7E quality time though, which is of course the MOST important thing!

I was chuckling out loud reading this excerpt. Ms Kahler has significant talent and I am anxious to read the entire story. Thank you for entering me in the giveaway.

Thank you for the excerpt.l. Mrs. Bennet will never stop matchmaking and will continue to get the couples confused.

One small change can indeed make a difference. Wonderful.

Great excerpt! This whole book is a delight to read! Congrats, KC!

I like the idea of Darcy and Elizabeth working together. Nice silhouette cover!

I loved the excerpt and the cover is gorgeous. I'm looking forward to reading it.

This book sounds so lovely, looking forward to reading it :)

I'm happy everyone enjoyed the excerpt. Thank you all for commenting. Good luck in the drawing!

A very enjoyable excerpt, KC. Thank you for sharing this interaction between the would-be conspirators who I hope will successful complete their mission to tear Mr Collins away from Jane.