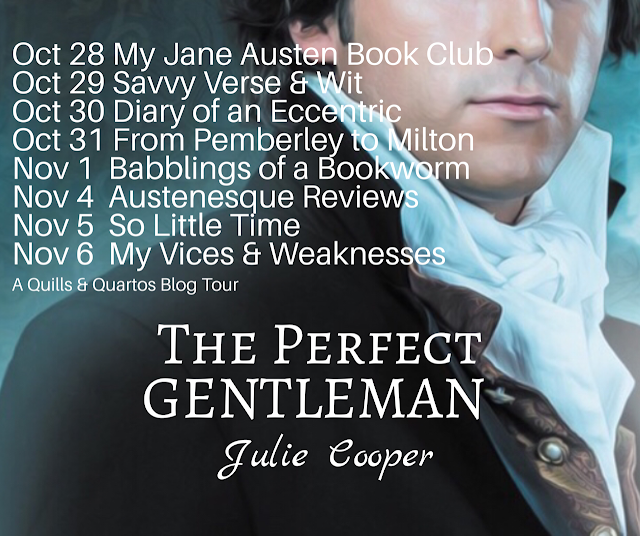 
The name of the winner is ... MARSHA! Thank you, Marsha, for dropping by and leaving your comment. Congratulations!

The Perfect Gentleman was inspired by my travels through JAFF (Jane Austen Fan Fiction), after reading one very unlikely plot after another, wherein Darcy falls in love with a completely “inappropriate” Elizabeth from a different social class. I just could not see the haughty, arrogant son of Pemberley’s Finest lowering himself long enough to truly see her.

What, I asked myself, would create enough of a chink in Darcy’s Armour of Decorum to allow the “Real Elizabeth” in? Especially the particular Lizzy I had in mind! It was a challenge to create that chink—which actually required more of a crevice than a chink, or perhaps a Grand Canyon-sized fissure—and have some fun with it as well.

What follows is an excerpt showing just how far Darcy would have to fall in order to “see” his one true love. In a case of mistaken identity, Elizabeth believes Fitzwilliam Darcy to be the solicitor for a particularly reprehensible would-be “client” of her mother’s—Fanny Bennet, who just happens to keep a roof over their heads by accepting the occasional male protector. Darcy believes Elizabeth Bennet is an eight-year-old child and that the female he will be meeting is her demimondaine mother!

Excerpt from The Perfect Gentleman

Before entering the parlour where Mr Darcy waited, Elizabeth squared her shoulders, firmed her chin, and prepared to make her point swiftly and succinctly. This was not the daunting Mr Goulding, she reminded herself, only his hireling. Jacob was nearby in the kitchen and would come quickly if called. She had dealt with pawnbrokers, spongers, drunks, and harlots; she could certainly deal with a solicitor. She opened the door, prepared to speak, but instead stood with her mouth open, caught mid-syllable. “Mr Dar—”

He was the handsomest man she had ever seen. Tall, with broad shoulders, a dimpled chin, and a patrician nose the envy of any aristocrat—a nose worthy of much finer forebears than a mere solicitor ought to possess. He was dressed all in black except for a hint of silver thread on his waistcoat, making his shirt and cravat appear ruthlessly white. Even the stone in his stickpin was black—onyx, perhaps. There was a day’s growth of dark whiskers on his chin, giving him a rougher appearance, as though he had added the extra touch of noir purposely to suit his attire.

Darcy whirled at the sound of the woman’s voice, impatient to finish this ugly errand. Evidently, he had timed his visit with some sort of soirée, forcing him to insist upon an audience with Mrs Bennet using the infamous Darcy stare. Now he found himself staring once again, but for an entirely different reason.

By all that’s holy. No wonder Bennet lost his head.

The harlot was beautiful. He was no expert on female clothing, especially this sort of female, but her frock clung to her light, pleasing figure in an extremely promising fashion. Her hair was piled untidily upon her head, with curls escaping at her nape. She should have looked frowsy and unkempt, but instead she brought to mind pale skin in sultry moonlight and the last thousand nights he spent alone. Her eyes were wide, thick-lashed, dark, and appraising. She appeared much younger than she ought—part of her arts and allurements, he supposed—and he wondered how she maintained such a fresh, innocent aspect. Perhaps innocent was the wrong word, what with those eyes. No female with such eyes could be an innocent. Eyes so deep a man could drown in them, never remembering to come up for air.

Before he went down, he fiercely reined himself in. Doing so made his words emerge more sharply than he meant.

“I have come about the girl.”

There you have it, and I hope you’ll read more of The Perfect Gentleman to discover how these two manage to find a foundation for happiness, despite their rocky beginning! 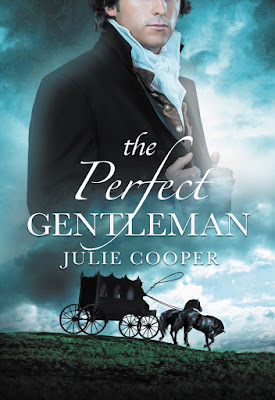 ’Tis no secret that Lizzy Bennet has dreams. The uniquely talented daughter of a woman with a dubious reputation, Lizzy knows she must make her own way in a world that shuns her.
Fitzwilliam Darcy carries the stains of his family’s disgrace upon his soul and only by holding himself to the strictest standards has he reclaimed his place in society. Now Georgiana Darcy has gone missing. If his fifteen-year-old sister cannot be found quickly, the scandal could destroy Darcy’s years of perfect behaviour. Lizzy Bennet know just what to do to find Georgiana. She is willing to join the pursuit to get what she wants but will Darcy be willing to trust her with his secrets? And what will they do when the search for Georgiana reveals what neither expected to find?

You can win a $50 Amazon gift card from Quills & Quartos Publishing! The contest ends on November 13. To be eligible, just comment on any of the blog tour stops and Quills & Quartos will select a random winner from the comments. You need not visit all the stops (one point per stop and comment), however, it does increase your chances of winning by earning more entries. Please check the Quills & Quartos Facebook to find out about winners. 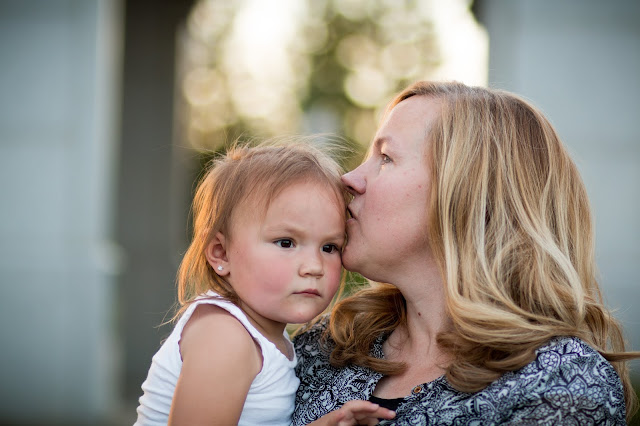 I am presuming then that there is no Mr Bennet if Fanny Bennet accepts the occasional male protector.

Thank you for sharing this awesome excerpt, Maria!
Good luck on the blog tour launch and congrats for your release. Looks like readers are loving it, Julie! I can’t wait to read this book that I hear is two books in one big book.

I look forward to reading the finished version of this book as I first read it when it was on one of the forums. Congratulations Julie on your new release!

This sounds like a wild ride! Thanks for sharing it with us :)

A perfectly sizzling excerpt, and I expect the book will be no less so. Congratulations on publishing, Julie! :)

Thank you everyone! Your kind words are much appreciated.
Yes, their meet-cute is probably not one they will tell their children about, but it is memorable!
There IS a Mr Bennet, who definitely has a thing or two on his conscience.
And thanks to Q&Q for the $50 gift card promo. Good luck to everyone!!

Great story: wild, funny, romantic, and sometimes hilarious. Definitely turns canon on it's head, but our dear couple and other favorites keep to their characters. Cannot say too much without giving away spoilers, but I loved it and gave it 5 stars on Amazon.

Wow! I’m so looking forward to reading this one! I have it on my list so hopefully that will be soon!
I assume the girl Darcy is talking about this Elizabeth? I want to see his reaction when he realises this is Elizabeth and not her mother!
Thank you for sharing this.

Interesting excerpt. Congratulations on your publication. I have only heard and read 5 star reviews. Thank you in this chance to win this giveaway.

I enjoyed the excerpt as I love when people meet and they mistake the others' identity. I hope Mr Darcy doesn't treat her too badly although given what he thinks about her, I won't be surprised if his comment of her not being tolerable enough to tempt him is a compliment by comparison.

I don't know if he is THE PERFECT GENTLEMAN, yet, but this sounds like the perfect read.

Thank you for the kind review, Cheryl! Amazon reviews are hugely, enormously appreciated.

I'm so pleased to be on anyone's TBR lists! Please know that Mr Darcy is, indeed, a gentleman. He may be appalled, but he minds his mouth. His thoughts...are a little more honest. Lizzy is a little out of his comfort zone, lol. But he is intrigued by her from the beginning, although it's certainly not insta-love.

Good luck everyone! $50 would sure help on those TBR lists!

Thanks for another great review, very insightful! I am really looking forward to this book!

Thanks for sharing an excerpt! I’m excited to see all the stops on this blog tour.

The premise is very unusual and sounds intriguing, the cover is beautiful and mysterious. Congratulations on the release of this book Julie. I'm looking forward to reading it.

I love the book Julie. Once you start you just can't stop. So much fun. It really sucks you in and the historical detail is fabulous. I enjoyed every minute. :) Many congratulations on the publication of your first, of many, books. Can't wait to read the next!

Oh FD already mesmerized upon first acquaintance... loving this story. Wonder what retort EB has for that short response FD said to her. Can't wait to learn more of the story. Thanks for the excerpt and the chance to win.

Oh I love mistaken identities :) Sounds like a fun book!!

With no Mr. Bennet, Jane real father being Baronet, and Mrs. Bennet's relationship with Wickham... this sounds like such an intriguing story. Looking forward to reading it!

Oh dear. Talk about misunderstandings... and instant attraction! I really hope to read it soon! But then, we'll have to wait for Volume 2, don't we?

Just to be clear - both volumes are in one book. This is not a "cliffhanger" requiring another purchase in order to complete the story! No waiting required.
Thanks everyone!

The story is very enticing from reading the entertaining excerpt. I wonder what Darcy's secrets are. Is it something to do with his mother's dalliance with her lover? And why have Georgiana gone missing? Was she kidnapped or left on her own accord? This is getting interesting, Julie.