In Fine Eyes and Pert Opinions Vicar’s daughter, Elizabeth has grown up in the shades of Pemberley, a great friend to Darcy and his sister Georgiana. A baronet’s elegant daughter distracts Darcy from his duties, leaving the Darcy family on the brink of disaster. Elizabeth holds the key to their restoration, but she has fled Pemberley, unable to tolerate another day there. Will Darcy relinquish his pride and prejudice to seek out a woman below his notice before his family is irreparably ruined? 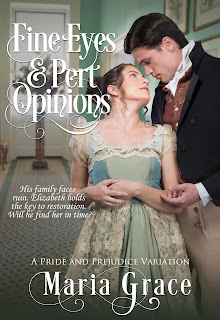 Darcy is at his wits end.

As guardian to his younger sister, he wants her to become a properly accomplished woman--she is coming out soon, after all. But Georgiana steadfastly refuses despite the encouragement of Elizabeth Bennet, long time Darcy family friend.  Darcy invites a few guests to Pemberley in the hopes of encouraging Georgiana's improvement with a taste of society.
Unexpected additions to the party prove dangerously distracting, leaving the Darcy family on the brink of disaster. Elizabeth holds the key to their restoration, but she has fled Pemberley, unable to tolerate another day in the Darcys' company.

Will Darcy relinquish his pride and prejudice to seek out a woman below his notice before his family is irreparably ruined? 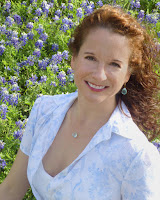 Five-time BRAG Medallion Honoree, Maria Grace has her PhD in Educational Psychology and is a 16-year veteran of the university classroom where she taught courses in human growth and development, learning, test development and counseling.

None of which have anything to do with her undergraduate studies in economics/sociology/managerial studies/behavior sciences.

She pretends to be a mild-mannered writer/cat-lady, but most of her vacations require helmets and waivers or historical costumes, usually not at the same time.


Maria Grace is hosting a giveaway on her blog. Check it out!

Love that Elizabeth seems to be the one that saves the day.

Sounds very interesting. I love a spirited Elizabeth - and a different take to the usually mild-mannered, shy Georgiana! This one is going on my TBR list.

Now this is different a Vicar Mr Bennet. Lizzy already friends with the Darcys. Sounds like FD and EB could be childhood sweethearts.