One thing I love the most is that there are certain assumptions, large and small, that we Janeites have come to accept as fundamental truth about the characters we love, even if it is something that does not necessarily appear on the pages. Fanon. The best example, I think, is that the colonel must be called Richard, Mr. Bennet is Thomas, and Mrs. Bennet is Fanny. Some bits of fanon are a communal epilogue – that Mary and Kitty go on to make exceptional matches, and form a lasting bond with Georgiana.

Today I’d like to share a few of my favorite bits of fanon with you all, and even a few hints as to which of them you might see in Strong Objections to the Lady....

It’s safe to assume that after Lizzy and Darcy get their HEA, Wickham, Lady Catherine, and Caroline Bingley all live miserably ever after – right? I always like to deliver a little more justice for my villains, and that is something you can expect to see for all three of these baddies in my new release.

This is an idea I love seeing in other fanfics, and I think that most Janeites are on board with Charlotte having the chance to meet her true match, even if it costs her Longbourn. If you’re one of the people that subscribes to this fanon, you just might be in luck.... 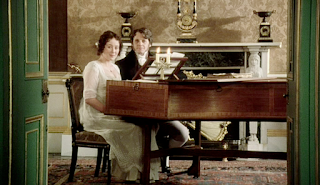 I do love some good Fitzwilliam sass! It was not until my most recent re-read of P&P that I realized how small a role he really plays, but his dialogue has just enough sparkle and wit to allow us to run wild with notions of him sassing Darcy and lightening up awkward situation, which he can usually be counted upon to do in all my books.

This is actually a tough one for me, because as a reader I always envision Elizabeth Bennet as an absolute paragon of female excellence, but as a writer I play to her flaws, which was almost inevitable in Strong Objections to the Lady because she and Mr. Darcy are stuck together in Kent for some weeks after his disastrous proposal.

Who doesn’t love to imagine that someday Mr. Bennet is finally motivated to get it together? This is another bit of fanon I adore, and I was really happy that I had a chance to weave this into the story.

Just as likable, in my opinion, Mr. Bennet’s cheeky side likewise gets a chance to shine in Strong Objections to the Lady.

Though it’s easy to wish Wickham every misery, I know a lot of Janeites hope the best for Lydia – that a rash decision at 15 should affect the rest of her life is severe. Whether it be through some reformation of Wickham, or salvation from his villainy, I love seeing other writers give Lydia a break, and this time around I let her off easy.

Thanks to the 1995 miniseries, this is unshakeable from my mind – Caroline and orange are virtually synonymous! I love finding little ways to allows other characters to throw a little shade, so this is something you can look for in my Strong Objections to the Lady.
Honorable Mentions:

There are so many great Darcy moments from the movies that have become fanon as well, and I have tried to pay homage to all of them in various stories. Though I spare them the rain, my favorite of all the great non-canon Darcy moments is reincarnated at one point in Strong Objections to the Lady: the almost-kiss.

My biggest piece of personal fanon, however, had always been a firm belief that all was not as it seemed with Anne de Bourgh, and that idea became a central building block of Strong Objections to the Lady. From the very start, Anne is a spitfire, and though Darcy has always known she was repressing a very strong personality during her mother’s lifetime, Colonel Fitzwilliam is blindsided by the discovery….

As Anne begrudgingly accepted her cousin’s arm on their way out of the church, Mr. Marsh intercepted them at the door. “Colonel Fitzwilliam, Miss de Bourgh, I bid you good morning, and my heartfelt condolences, of course.” The curate looked nervously about, and took a few steps back from the departing parishioners. “I fear I must apologize for my discomposure this morning – the sermon was not at all to my credit, at a time when you most need words of comfort. As you must soon replace Mr. Collins, I would hope I might have another opportunity to demonstrate my… value to this parish, Colonel Fitzwilliam.”
Anne glowered at the curate as he smiled charmingly at her cousin, as if the decision was his to make! She cleared her throat and looked icily at Mr. Marsh. “Sir, I appreciate the sentiments you have expressed, but such an endeavor is hardly necessary.”
“I believe it is,” he said, his eyes landing on her only for a moment before he addressed Richard once more. He leaned forward confidentially and said, “I have been offered a very coveted position as curate in Bath, but if I could remain near my family, as a parson....”
“That will not be necessary, sir,” Anne interjected. “I am sincerely relieved that you have some opportunity to look forward to. My cousin Perceval is expected tomorrow – he is recently ordained himself, and will be assuming all of Mr. Collins’s duties. But you must do what is best for yourself.”
Mr. Marsh nodded and gave a curt bow. “Very well, Miss de Bourgh. I shall make ready to leave for Bath at once. Best of luck to you and your parish.”
Anne gave a muffled laugh as Mr. Marsh stormed away. She turned the other way, her steps swift as she began the short walk to the parsonage, and Richard hurried after her.
“What the devil was that about, Anne?”
“I should hardly like the next parson to bow and scrape as Mr. Collins did, but I do think some modicum of respect is in order!”
“And so you have volunteered Percy, without even consulting him? Even if he agrees, as I am sure he will feel duty-bound to do, whose interest do you think he will serve?”
“The Almighty’s, I should imagine,” Anne spat, quickening her pace, as the parsonage was already in sight.
“Do not be so willfully naive, Anne!”
Anne withdrew her arm and moved away from him. “Perhaps you need not be such a bully!”
He scoffed at her. “I, a bully? You knew of Mr. Collins’s death, I know you did. You could have warned Mr. Marsh to make his preparations, and instead you let him struggle. Why?”
Anne had stopped walking completely and rounded on her cousin, her temper past restraint. “Because I thought it would be amusing to see that smug man humbled? Because I am so beset with grief and despair that it quite slipped my mind? Please advise me what you would most like to hear.”
“I should like to hear two words of sense together from you, but obviously that is out of the question!” 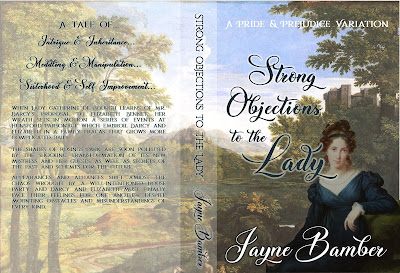 Strong Objections to the Lady will be available on Kindle and Kindle Unlimited on December 21st, with a paperback soon to follow. I will be sharing more excerpts throughout my blog tour, and there is an e-book giveaway you can enter by clicking here. You can also follow me on Facebook for more updates!

I like your bits of fanon too! Looking forward to reading this book.

Excellent information Providing by your Article, thank you for taking the time to share with us such a nice article. Amazing insight you have on this, it's nice to find a website that details so much information about different artists. Kindly visit the LiveWebTutors website we providing the best assignment help services in Australia.

Very interesting blog. Alot of blogs I see these days don't really provide anything that I'm interested in, but I'm most definately interested in this one. Just thought that I would post and let you know

Thank you for sharing such informative info hope you keep sharing, i recommend visiting entertainment company

Many of the companies providing buy private blog network services for the websites those want to create their own blog network from where they get backlinks and also ranking.

Very nicely explained and include all important information. I also recommend visiting best astrologer in india

A Pride & Prejudice Variation is an incredible story. The character of the lady is just so inspiring and motivational to the women's and as well as for Men's. The company Assignment Master UK Reviews where I'm working has a huge library from which I had got this book and I had shared this with all my friends to read this article. Thanks for sharing this article and I hope for the more Articles like this from the author.

Very lucky to be able to read this information. Very helpful to me in meeting my information needs. Where can I get information like this?