BOOK UNDER THE SPOTLIGHT: THE DARCYS OF NEW ORLEANS BY MAGGIE MOOHA 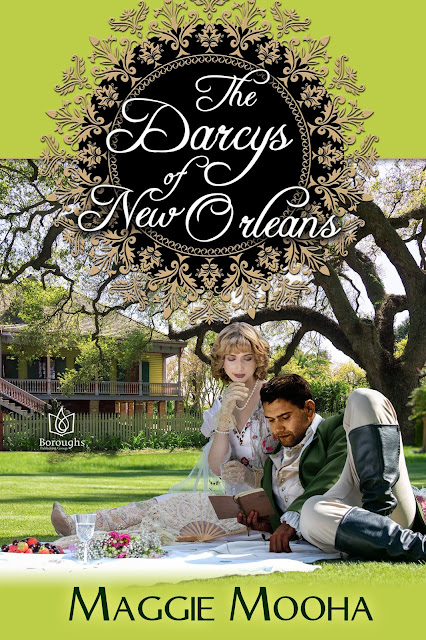 THE DARCYS OF NEW ORLEANS

In this sequel to Elizabeth in the New World, Elizabeth and Darcy's romance endures and deepens. After Elizabeth suffers a devastating loss, Darcy decides to take her, their daughter Emma, and their son, Bennet, to visit Elizabeth’s dear friend Poppy in New Orleans. Now a free woman of means, Poppy lives on a plantation with her husband, daughters, and son, Phillipe.


As the visit begins to work a tonic on Elizabeth’s wounded spirit, Emma and Phillipe have taken an instant dislike to one another. A free man of color who was educated in France, Phillipe harbors ill will toward the English. He sees Emma as a spoiled heiress who knows nothing of the struggles his family has endured. Despite their turbulent beginning, they fall in love, and learn that even in New Orleans mixed society, what they have together is forbidden. When yellow fever strikes both families, Elizabeth and Darcy face losing their son, and Poppy her beloved husband. Tragedy is compounded when the English fleet makes a surprise attack on New Orleans. Once again, Darcy and Elizabeth find themselves in the midst of conflict, and the young lovers are torn apart not only by society, but also by war.

This voyage had been the first Elizabeth made since her homecoming from Grenada when shewas only a girl of twenty. The days at sea brought back memories of the first voyage she madewith Edward Home and his sister Barbara. Although this ship was of foreign design, it wassimilar enough that at every turn, she was reminded of her days of excitement and adventure, andalso of the grief she tried expunging from her heart when she thought of her Darcy, cold andalone in his grave.

She did not know he lived still. She did not know many things. It was on board ship that she first began to learn of the horrors of slavery due to the Quaker couple who voyaged with them. It was when she began to consider a new turn in life, one that might keep her in Grenadaindefinitely, perhaps as the wife of Edward Home. So many thoughts and memories: so muchshe was to learn after that first voyage.

It was well after ten bells in the evening when she stood at the railing, watching the black and silvery water slip noiselessly beneath them. She listened to the creaking of the rigging and the soft banter of the seamen on night watch. She had to admit that stirrings of excitement began to bubble up in her for the first time since that fateful day when she experienced her latest loss. Itwould be so good to see Poppy again. She tried to imagine her now, the mistress of herhousehold. It made Elizabeth smile. She was so lost in thought that she did not hear Darcy approach from behind her.

“I wonder if I may speak to you, Miss Bennet,” he said in the darkness.

“Perhaps, sir. If you can keep a civil tongue in your head,” she answered, teasing him.

“Are you still angry with me, Lizzy?” He did not seem amused, so solemn was his tone. She could see only the outline of his features in the moonlight, but knowing his so well, she knew he had been beleaguered with his own thoughts.

She looked up at his shadowy countenance. “I was never truly angry with you, my dearhusband.” She sighed in spite of herself. “It is just that…” The words would not come. “Dearheart, you cannot erase all that has happened.” “That was not my intent.”

“I am putting it poorly.” She turned from his gaze and looked out again to the sea. “I will not be restored to the person I was, no matter what you do, or even what I do. That person is gone. She died with her baby.”

Darcy said nothing, but she felt his arms encircle her. Leaning back, she let her head rest in the crook of his neck. They stood there for a long while, and then he spoke. “We have beenthrough much together, Lizzy. More than most. We both have changed from where we started. Iwould like to think that those changes were, in the most part, for the better. Do you not thinkso?”

She turned in his arms and looked into his face. “It seems that I will spend my entire lifemisjudging you,” she said, trying to control the emotion in her voice.

“Ah, well.” He gently tucked away a strand of hair that had fluttered in her face with thebreeze. She wanted him at that moment. He bent his head to her, and kissed her, gently at firstand then again and again, each one becoming more ardent than the last. She could feel her bodygrow weak in his embrace. This was not the kiss of a man who was her helpmeet and her spouse,but the kiss of a young and ardent lover. A kiss of passion. Alas, with two children in theirbedchamber, it was to be only a kiss. But, perhaps, longing is the better part of desire. When shefinally looked into his eyes, she saw the Darcy who had sacrificed everything for her. She finallyfelt something awaken in her that had long been covered in a blanket of sadness and despair.

"May I escort you to your cabin, miss?”

“If you can do so without creating a scandal.” She adopted her arch manner once again.

“I can tell you, my dear Miss Bennet, that I am quite prepared to create a scandal, but myprediction is that we will find our youngest sitting in his hammock waiting for us to bring him aglass of water.”

Elizabeth could feel it now, that flicker of happiness burning steadily if not yet bursting into flame. It was enough. They stood before the door, and she kissed him again. When they opened it, there was Benji standing in the darkness, looking out of the stern watching the waves.

Maggie was born in Chicago, Illinois and spent her formative years in the suburbs. Most of her career was spent teaching music, which she is still doing. Maggie is well traveled, having lived in Tanzania, East Africa, and in the Philippines. During her time in Africa, she began writing. Elizabeth in the New World is her first published novel.

Elizabeth in the New World is a Pride and Prejudice variation that takes place during an uprising on the island of Grenada that took place in 1795. The book delves into the realities of the Regency period that go beyond the parlors and assemblies of Austen's England.

One of the wonderful things about writing is research. No, it really is. Traveling to Grenada to see the actual places where the historical events took place was eye-opening to say the least. A trip to New Orleans was on the agenda for Maggie this year and was instrumental in creating the sequel to Elizabeth in the New World, The Darcys of New Orleans.


The best part of life is learning. Maggie hopes that readers not only enjoy the adventure and romance of her books but enjoy learning a little history too.

Win book 1 + book 2 in Maggie Mooha's saga: Elizabeth in the New World + The Darcys of New Orleans. The giveaway is open internationally and end on January 9th, 2020.


a Rafflecopter giveaway
Posted by Maria Grazia at 08:00

I really don't know about this one, my dear. It appears to me that the author has not done much research, otherwise she would have known that the bell system never goes beyond eight (8) bells. There are three 8 bell watches per day on a ship. By the way, I am also a USCG brat. I do not believe that I will be trying out this book; however, thank you for bringing it to our attention.

I read Elizabeth in the new world and would love to read this sequel. Thanks for the chance to win a copy.

I have not read the first book, specifically because I need both books first! I look forward to enjoying them.

I am not typically a reader of romance novels, but I am glad I made an exception with these books. They are fabulous. Mooha has researched the history, and she transports the reader to a different time and place where I really cared what happened to these people. Her characters are three dimensional, and the problems they face may not seem be what we experience, but perhaps in modern life we experience them in a different flavor. Once I started reading, I couldn't put the books down.

Wonderful excerpt. Thank you for the giveaway

I've skipped over the excerpt as I haven't yet read Elizabeth in the New World, just in case there are any spoilers. Sounds like an interesting premise. Many thanks for sharing with us.

Loved the covers of the book. Love blending history with the story of ODC. I haven't read the story yet, but I am grieved of what EB had gone through.

Thank you for sharing this excerpt (ODC together). Thank you also for the chance to win a copy.

Thanks for all your input and for the kinds words. To address Ms. Ergane's concerns, actually, I do a lot of research for my books, but obviously missed the "8 bells" detail. I will not do so in future. Again, thanks for reading the excerpt and I hope you enjoy the books.

We offers you a unique opportunity to play rummy online with thousands of players participating in our competitive rummy tournaments and vying for whopping big cash prizes. The clients can download rummy from the Play Store/App Store and appreciate playing rummy on portable.


Online rummy is one of the most entertaining games that gives players a ton of options. There is something suitable for every kind of rummy player on our platform. Download rummy app now! Check the latest promotions, rummy tournaments, news and updates in our rummy blog section.