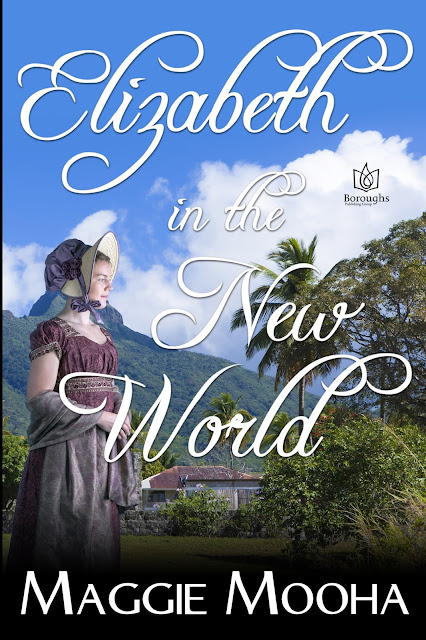 Darcy's sudden, passionate kiss sweeps Elizabeth into a bliss she has never known...but their love is short-lived. On a field of honor, Wickham, once again, engages in an irresponsible act, which leaves Darcy mortally wounded and Elizabeth broken. Refusing to leave Darcy's side, the last vestiges of her reputation are shattered, and when Elizabeth sees Darcy in his coffin, she is ruined in more ways than one. Devastated and without hope, reluctantly she agrees to accompany friends to Grenada, a Caribbean island on the brink of revolution.

Things are not what they seem. Darcy hasn't died, but Elizabeth is gone and he fears it is too late to recapture what he has lost. As he struggles to recuperate, he must put aside his pride and his heritage in order to find the only woman he will ever love. Never before has Darcy sacrificed so much for a passion he fought against so vehemently. And never before has Elizabeth’s strength of character been stronger - it is the only thing standing between her and an end that doesn't include Darcy.

Darcy arrived at the Gardiners’ the following day as the sun’s pink and golden rays began to colour the clouds. Although a servant opened the door, Mr. Bennet stood ready in the hall. He looked exceedingly agitated. Darcy made a slight bow.

“Thank goodness you have come, Mr. Darcy,” Mr. Bennet said, his voice shaking. “I apologize for involving you, but you are the only gentleman of our acquaintance whom I trust…”

I think I’ve always been a storyteller. When I was still little, I used to tell my sister stories before we went to sleep. Most of them were serials – Superman and the like. It was funny how it never occurred to me until much later in life that I should try my hand at writing.

Most of my career, I’ve been a music teacher. It’s funny how music is such a help when crafting a story. I actually see the structure of a book or a screenplay as if it was a musical composition.
As for the nuts and bolts of my life, I grew up in the Chicago area and was a teacher there for quite a few years. I had a chance to teach at an international school in Dar Es Salaam in Tanzania, and I spent two years there. After adopting my son from Russia, we spent four years at an international school in the Philippines. During that time, I began writing.
Most of my work has been screenplays, and my writing mentor is Madeline DiMaggio. I learned a great deal from her, not the least of which is what parts of my “deathless prose” or in screenplays “deathless dialogue” to toss out because they don’t contribute to the narrative. During my screenwriting days, I won a competition sponsored by a magazine in New York and was a semi-finalist at the Austen Film Festival in the Prime-Time Television Series category. I’m just telling you all of this so you don’t think I just sat down one day and wrote a novel right out of the blue. I’ve spent a lot of years working and learning.
It took me four summer vacations to write Elizabeth in the New World. I had the idea for the beginning of the book and the dénouement of the plot in my head for a while. I saw them like they were scenes from a movie. I knew I wanted to set it in a real conflict, so began searching for a conflict that involved the British that took place during Jane Austen’s lifetime. That conflict was Fedon’s Rebellion in Grenada. The rest of it was like putting a puzzle together – a puzzle that included tons of research.
A couple of things that helped me a lot was advice I got from a self-publisher who gave an extension class at our local university. She said to write down the plot of the entire book in short scenes and put them on note cards. I did that and taped them to the two doors in my study and then just started cranking through them. The other really valuable thing she said was, “Don’t go back and read anything you wrote until the whole book is done.” She was right. You can fix the first three chapters forever if you let yourself.
I am hoping that this is not my first and only book. I don’t know if the next one with be a sequel or something new entirely. Someone a long time ago called me “an insatiable romantic”. I hope it is still true.

a Rafflecopter giveaway
Posted by Maria Grazia at 14:55

As someone who enjoys history I would be interested in learning about the Fedon’s Rebellion in Grenada,

I liked the sound of this book the first time I read the blurb, and it is on my wishlist!

Intriguing premise. I'm heartbroken for Elizabeth for thinking he's dead. What a reunion that must be when she sees him for the first time after his "funeral." Thank you for the chance to win a copy in the giveaway!

Oh, what a great excerpt!

This sounds really good. I haven't read anything from this author before. I would love to!

Fabulous excerpt! So romantic and intriguing. Can't wait to read it. Count me in to the giveaway. :o)

This is a new twist to P&P. Congratulations on its release. I look forward to reading it. Going on the TBR pile.

Prices are reasonable, food is delicious, and wait staff is sweet, conscientious, and adorable. I came to Chicago venues here for an event, got contained to upstairs. Service was prompt and food was awesome.

I just want to take my accounting test online I prepared my test and looking to give tests online and want to know how much I prepared my exams that's good for study.