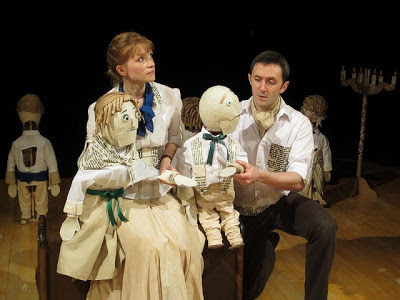 Antonia Christophers and Noel Byrne are the Box Tale Soup, a two-actor company on stage these days with a very special adaptation of Northanger Abbey. Welcome them to our online club and discover more about them and their work.

Welcome to My Jane Austen Book Club,  Antonia  and Noel thanks for accepting my invitation to talk Jane Austen with me.


First question is ... Where does your name come from?


Antonia: It actually took us rather a long time to come up with a name for the company that we are happy with. We wanted the name to encompass the various things that make us unique. One of our aims is to fit all the necessary props, costume and set for out shows into our vintage trunk so we wanted to have something luggage related in the name. And then Noel ended up coming up with a pun on the traditional English Soup ‘Oxtail Soup’ thus ending up with Box Tale Soup. We spell the ‘Tale’ that way to refer to the fact that we create adaptations of classic literature.

Noel: Yeah, it was a joke at first, but then the name grew on us!
How did you meet and decide to become a company?

Antonia: We met working for a company who staged productions of Shakespeare plays for schools. We were working together for over 6 months touring around the UK to a variety of different secondary schools with the plays, ‘Romeo and Juliet’ and ‘The Tempest’. We were playing Romeo and Juliet!!
Noel: After that first job finished, we saw quite a bit of each other. To cut a long story short, we recently got engaged to be married! I think we both have a great respect for the other's ability as a performer though, which came from a professional environment first. We knew we worked well together, and thought that we could create something really special.
Antonia: We decided that we would like to make our own work and so we formed Box Tale Soup.


What are the pros and cons of being a company of just two? 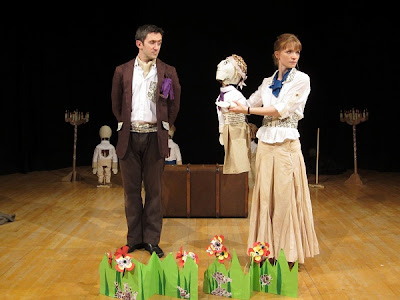 Antonia: We are lucky in that we work very well together and have worked out the best way to divide all the various jobs we have to do between us. We make all our own set, props, costumes and puppets as well as performing in the productions and working on all the admin for the company! The one main disadvantage of there being only two of us is that we could often do with an extra helpful pair of hands! We did employ a very good friend of ours to direct Northanger Abbey as we very much needed a director to put the finesse on the production.
Noel: As a couple who also work together, you have to be quite careful about blurring the lines between your personal life and your work. It can be hard to switch off, and to maintain a professional outlook. We have a pretty good system now though, and some good rules to keep things working smoothly!

How did you come to interact with puppets in your performances? Whose idea was it?

Antonia: When we decided to adapt Northanger Abbey it was the character of General Tilney that really began our interest in puppetry. We originally imagined him as a giant shadow puppet that would constantly lurk in the background and be a very intimidating presence. We then decided that the characters of Mr and Mrs Allen would also make charming puppets, so began experimenting with how to make them. The puppet cast then just grew and grew and there are now 7 in total in Northanger.
Noel: It wasn't something we really set out to do, although we both loved seeing puppetry. But as we experimented and investigated the ways to create our version of Northanger, the idea appealed to us more and more. There's a certain magic that happens when a puppet comes to life on stage or on screen, and it's always gratifying to see how people react to our puppets.

Now, our beloved Jane Austen. Why Northanger Abbey? What intrigued you most in this novel?

Antonia: It has always been one of my favourite books so I was eager to give it a try. We love the characters of the novel and the fact that there is so much humour there. We also really enjoy the gothic references in the novel and we have quite a lot of fun with those moments in our production.
Noel: It was Austen's sense of humour that really struck me on first reading Northanger Abbey. It was a lot funnier than I expected. And as Antonia said, the gothic themes in the book are great fun to play with on stage.

Have you read other Austen novels?

Antonia: Yes absolutely, I have read them all and Noel has read a few others. Another one of my favourites is Sense and Sensibility.

What do you think is the appeal of her world to contemporary readers?

Antonia: She writes such good ‘love stories’ that are still very much, in their own ways, relevant to our contemporary lives. They are also a great way to escape the fast paced nature of the contemporary world to a world that is much more relaxed, where the most important things are what to wear to the next ball and finding an eligible husband!
Noel: I think well written characters will always stand the test of time. Although the setting may be different, we can still recognise and relate to human nature. Austen has a beautiful way with words too, and a great sense of humour.


Noel, what do you most appreciate in Henry Tilney? 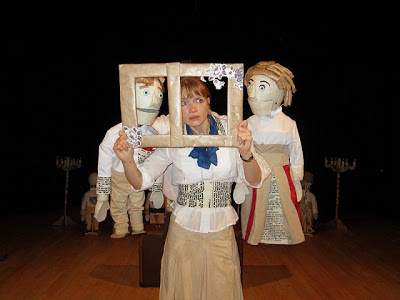 Noel: I find Henry quite good fun to play, because he's got a powerful sense of irony that is often lost on those around him, and a cheeky sense of humour. Although this is entertaining, it also makes him seem a little out of place at times, as he's not entirely accepting of the societal rules, especially when we see him in Bath. I think this makes him easy for audiences to warm to, and relate to. He can be a bit of a tease, but his heart's in the right place.

Antonia,  is it fun being Catherine Morland?

Antonia: I love playing Catherine, she gets so wonderfully carried away with all the gothic novels and has a brilliantly over active imagination. I think she is a very genuine character as well and one that young girls even now can still relate to.

Who's the target audience of your show?

Antonia: We have tried to create a show that is appealing and suitable for everyone. We wanted to remain very faithful to the original book so that Jane Austen fans would really enjoy the adaptation. We also wanted to try to introduce a new audience to Austen. The puppetry element of the show means that there are a lot of people who wouldn’t normally choose to watch a period drama who really enjoy the production and all the humour we get out of it.

What is the scene of Northanger Abbey you most enjoy acting?

Noel: There are so many fun scenes in this show, for various reasons. I really like the first meeting of Catherine and Henry, because it's a change of pace having the two non-puppet characters alone for the first time, and a departure from the strict social rules we've seen up to that point. I love the carriage journey to Northanger, when Henry teases Catherine about what she might experience. The scenes where we have a large number of characters coming and going are great fun, because we have to be really clever with the way we use everything at our disposal to make it work for the audience – swapping puppets, changing voices, using a few little tricks here and there... It's a fun show to do!

What is your schedule for the next months? Where and when can we see you as Henry and Catherine?

Antonia: Our next public performance is on the 6th December in the Old Palace at Hatfield House. This is a really special performance for us as it is a once  in a lifetime opportunity to perform in a genuine historic building. The performance will start at 8pm and lasts 1hr 15mins. You can book tickets via this link:

After that we will be appearing at various festivals next year including the famous Edinburgh Fringe Festival. Please check our website for updated information and performance dates and venues for these festivals:


Thanks you so much Antonia and Noel ! It's been nice to talk with you. Keep up with your brilliant job! My best wishes for your career and private life to you both.

Antonia Christophers graduated with a BA Honours degree in Drama and Theatre Studies from Royal Holloway, University of London. She then went on to train as an actor, and gained an MA in Classical Acting from Central School of Speech and Drama.Her theatre credits include:Anne Prospere in Divine Marquis at the Barons Court Theatre, London; Elaine in The Graduate, Buxton Opera House and UK tour; Louise Kendal in My Cousin Rachel at the theatres of Aldeburgh and Southwold; Juliet in Romeo and Juliet at the Pomegranate Theatre, Chesterfield.Her television credits include:Mhaegen in the award winning HBO series, Game of Thrones; Miss Peters in the acclaimed BBC drama, The Hour.

Noel Byrne graduated with a BA (Hons) in Theatre Arts from Manchester's highly regarded Capitol Theatre School. Having worked for several years in this field, he then went on to gain a PGCE from the University of Leeds.
Noel  has been involved in everything from Shakespeare on stage to voice and motion capture for video games, often creating and devising new work, including pieces for Manchester's Contact Theatre and London's Royal Court. Noel has also worked on television, appearing in the BBC's Doctor Who, The One Show and Mission 2110, among others. He has even been a dinosaur.In addition, Noel is also an award-winning street performer, who has performed around the world, and can regularly be seen at London's famous Covent Garden.
Posted by Maria Grazia at 17:16