A MATCH MADE IN AUSTEN - LET THE GAME BEGIN! INTERVIEW WITH MARJOLAINE LAFRENIERE 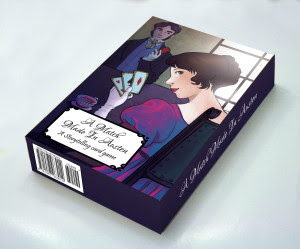 Hello Marjolaine and welcome to My Jane Austen Book Club.  A Match Made in Austen is the new card game you created for Renaissance Press, which will be released on 10th September. Can you briefly tell us what kind of game it is?

Great! I think our Janeite friends will love it. It may be a perfect game to animate tea parties or friendly gathering of any type. How many players can be involved in the game?

The game can involve as few as two players (with some rule variations included in the rulebook) and as many as six.

Which Austen characters are involved in your card game?
The game includes 54 characters from the six main novels of Jane Austen. They are, by books and in alphabetical order:

Since we are talking of Austen characters, who are your best favourites?

I’m sorry, but I can’t answer that question. I love so many of the Austen characters, for so many different reasons. My favourite changes with my mood, and any answer I would give today could very well be false tomorrow.

And since the aim of your game is to get to a perfect match, which two Austen characters represent the ideal match in your opinion?

I’m having a hard time coming up with one perfect Jane Austen match. (Indeed, in the game, there are several “perfect matches”, including all of the canonically happily married Austen couples.) The best matches are the ones where the characters complement each other in some way.

Usually, one is more serious and reserved, and the other is outgoing but sometimes childish; such is the case with Elizabeth Bennett and Mr Darcy, or Emma Woodshouse and Mr Knightley, or Jane Fairfax and Frank Churchill. (This last one might be my Austen OTP: I love how they are together, and how they reverse the expectations of the time by having her be the serious one.) Elinor Dashwood brings some purpose and direction in Edward Ferrar’s life and he gives her some quiet, drama-free space.

If you could be one of Austen heroines for one day, who would you be and why?

After thinking long and hard about it, I think I would like to be Marianne Dashwood. I would love to know how it feels to be so outgoing and dramatic and talented, for one day. As long as that day isn’t one of the ones she’s crying over Willoughby.

And who among Austen dashing heroes would be your perfect match?

Again, after much reflection, I have to go with Henry Tilney. He is very proper and very charming, and yet he is also the master of snark, and I love that about him. Of all the undisputed* Austen heroes, I think he would be the best for me.
*I must add this, because the male Austen character I truly think is my perfect match is Frank Churchill, because I see so much of myself in Jane Fairfax. She is my Austen self. But I’ve seen many contest the hero status of Frank Churchill, which makes me very sad but also drives me to find a less controversial match.

I guess you must be a  true  Janeite.  When and how did your love for Jane Austen’s World start?

I have to admit, I don’t know. To quote the great lady herself: It has been coming on so gradually, that I hardly know when it began. (Pride and Prejudice, chapter 59)

Who’s A Match Made in Austen designed for? Who’s the ideal player you had in mind while creating it?

I’m probably going to sound very self-centered; the player I had in mind when I created the game was myself: a person who enjoys telling stories and getting into character, and who adores Jane Austen. I have to add, though, that one of the best surprises I had play-testing this game is that even people who have never read or heard of Jane Austen have had a good time playing. The true ideal AMMIA player is someone who is not afraid to let their imagination run wild and have fun with their friends, or with complete strangers.

Did you do any kind of research before and during your work on the project?

During the planning stages, I re-read the novels to settle on final characters and on stats that I felt reflected their canon descriptions the best. It wasn’t enough that the Austen Canon Couples, as I call them, are all perfect 10 matches, they have to be perfect 10s for reasons that make sense.

My final question is… what is the appeal of the Regency World to present-day  audiences in your opinion?

That’s a hard one to answer, because the things that appeal to readers of Jane Austen (great settings that have both a familiar and an exotic feel and strong characterization) are not unique to her writing, or even to the writing of the Regency era. I can only answer the one thing that I love most about the writing of the period: the vocabulary. It creates the world in which Jane Austen lived, in a way that more detailed descriptions in modern day vernacular never could.

OK, Marjolaine. Thank you very much for taking the time to answer my questions. Time to play, now!

Email ThisBlogThis!Share to TwitterShare to FacebookShare to Pinterest
Labels: A Match Made in Austen, Games, Interviews and Guest Posts, Jane Austen's World

interesting premise for a game

how do we order your card game?

Sounds great. I love games and I love Jane Austen. Can't find the game anywhere and your link probabyl expired. Still, I'll keep looking now that I know it exists. Thanks.

Students often need help with their assignments. There are many reasons for this, the most common being that they have a lot of other things to do. It is not always easy to find the best assignment help, but there are many options available online.