BLOG TOUR & GIVEAWAY - SHANNON WINSLOW ON PERSUASION BEHIND THE SCENES 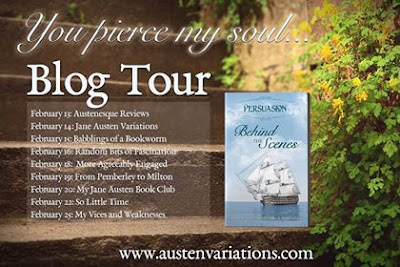 Hello dear friends and welcome to our online book club. Today our guest is Shannon Winslow, who is one of the twelve authors of Austen-inspired fiction that collaborated in a unique, creative attempt to fill in "missing" scenes to Austen's classic work, Persuasion,  sure to delight any true fan. The result is Persuasion Behind the Scenes.   Enjoy Shannon's guest blog and take your chances to win in the giveaway contest you find below.

I adore Persuasion and I have spent countless happy hours in that world in recent years–because of this group project and also for a Persuasion-based novel I happened to be writing about the same time (The Persuasion of Miss Jane Austen–A Novel, wherein she tells her own story of Lost Love, Second Chances, and Finding her Happy Ending). As it turned out, the two worked hand in hand together, the mindset and a few of the scenes from one translating nicely into the other.

In the same way, Persuasion, Behind the Scenes is intended to go hand-in-hand with what Jane Austen already gave us in the original novel. Using our imaginations, we expanded on the clues she left us to compose “missing scenes,” filling in some of the things she left blank. And there were plenty of intriguing opportunities!

For example, Jane Austen tells us very little of the initial courtship of Anne Elliot and Captain Wentworth. We’re told even less about the actual proposal scene. She only says in chapter four, “It would be difficult to say which had seen the highest perfection in the other, or which had been the happiest; she, in receiving his declarations and proposals, or he in having them accepted.”

Did Austen have difficulty imagining how things might have played out between these lovers? Did she think the details unnecessary or simply too personal to have an audience looking on? The same questions apply to the “missing” breakup scene. We will never know the answers. But because she left these two key scenes blank, I had the pleasure of writing them for Persuasion Behind the Scenes!

I think those were my favorites, in fact: the prequel scenes–scenes based on things referred to in the book but which actually take place before the “live action” begins. Since Persuasion is a book all about Anne and Captain Wentworth’s second chance, it leaves a lot of “first chance” territory wide open–things that set up what follows, beginning with the first pivotal event of Anne’s life: the death of her beloved mother when Anne was only fourteen (referenced in chapter 1). Another one of my segments, Beginning with an Ending leads off the book. Here’s an excerpt:

Looking back over a life too brief, Lady Elliot regretted nothing so much as that she had been far too careless in the choosing of her children’s father. The match had seemed ideal seventeen years before, at once both satisfying her family’s ambitions and gratifying her own wishes in the case. High in her parents’ consideration was the fact that young Mr. Walter Elliot was to be a baronet one day – sooner rather than later, judging from the indifferent state of his father’s health. For herself, Mr. Elliot was everything handsome and charming. He had a fine home at Kellynch Hall to offer her as well. What more could a naïve girl of nineteen have desired in a husband?

In hindsight, she could (and should) have desired a great deal more – prudence, sound understanding, strength of character, humility – less for her own sake perhaps than for her three daughters, whom she must now resign to Sir Walter’s questionable guardianship.

Mary was young enough, Lady Elliot reasoned, to recover from her loss in time. And, at sixteen, Elizabeth’s character was already so firmly formed in the image of her father as to make the matter of her mother’s staying or going of little consequence. But Anne! Yes, it was for her middle daughter that Lady Elliot’s maternal solicitude was most powerfully engaged. Anne, with her gentle nature and delicacy of mind, was the one most like and most inextricably attached to herself. Anne would feel the loss of her mother exceedingly, and she would be least able to bear with Sir Walter’s folly and neglect.

She must prepare her daughter, while there was still time, but Lady Elliot hardly knew what to say. How could one prepare a girl of fourteen for such a calamity?

Poignant from start to finish, Persuasion is often mentioned as either people’s first or second favorite Jane Austen novel. That’s a distinction it totally deserves, in my opinion. I hope you will find Persuasion Behind the Scenes a worthy supplement to it. I recommend reading it side-by-side with the original, slipping the missing scenes in where they belong for a fuller story. Enjoy! 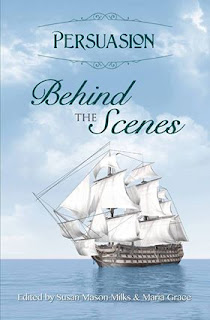 You pierce my soul.Before Jane Austen wrote that romantic letter from Captain Frederick Wentworth to Anne Elliot, she crafted a masterful story of heartbreak and longing that still resonates with readers today.But what of those scenes that Jane Austen never wrote?  What Persuasion fan doesn't want to listen in on Anne and Wentworth's first courtship, laugh at the follies and foibles of the Elliot family, sail along on Captain Wentworth's harrowing adventures at sea or attend Wentworth and Anne's wedding. 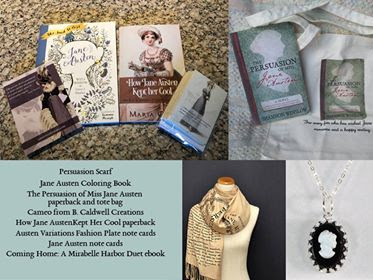 a Rafflecopter giveaway
Posted by Maria Grazia at 08:50

I adore "unrequited love" stories that eventually bring the characters together. And that love note that Captain Wentworth wrote--- probably the best one of all time!

As you mentioned persuasion is my second-favorite, I am so interested in reading the scenes what an intriguing idea.

Thanks so much for the opportunity to be here today, Maria! This was such a fun project, and I'm glad it's finally available to share with your readers and other Janeites!

I know, Laura! I was so thrilled to get to adapt that letter for use in my novel The Persuasion of Miss Jane Austen, mentioned above. Now that's another story of unrequited and (long-delayed consummation of) love for you!

I love these missing scenes.

Thanks for being such a kind and generous guest! I love Persuasion and its character, so Thanks to You All for the lovely "missing scenes" ��

So excited to see this! Had to get the ebook....patience is NOT my virtue...lol

A Shannon Winslow story: such a treat!

The time period and everything the novel tells us about it.
Theresa N
weceno at yahoo dot com