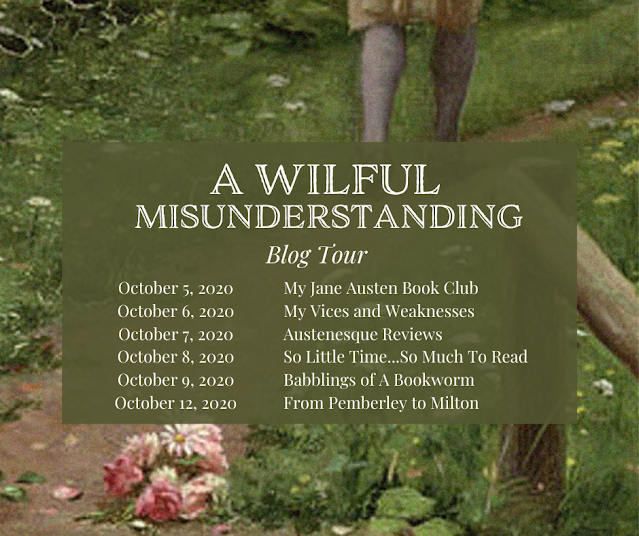 What if it was love at first sight? In A Wilful Misunderstanding Amy D'Orazio imagines Mr Darcy in love with Elizabeth Bennet the moment he saw her at the assembly in Meryton and that, of course,  moves things forward in a slightly different manner.

Read the deleted scene Amy wrote exclusively for My Jane Austen Book Club and have a look at the book blurb to get a taste of the atmosphere of this new romantic variation of Pride and Prejudice. Don't forget to leave a comment to take part in the giveaway contest and visit all the other blogs included in the tour to get more chances to win. Good luck, everyone!

On the 26th of December 1811, at a very early hour, Mrs Elizabeth Darcy sleepily opened one eye, to look into the intent stare of her dear husband.
"Ah, you are awake!" he cried out happily.
With a slight, muffled groan, she turned over, removing herself from his stare and attempting to retreat back into the land of Nod. The Christmas festivities had exhausted her, and she had hoped for more sleep.
Under its previous mistress, Darcy's mother, Christmas had been a time of celebration at Pemberley. A tenants' ball would be held, or a small fair might be hosted. The house would be decorated to splendid proportions and the public rooms opened to pleasure seekers. However, as the master had married so recently, it could not be expected that such celebrations would have been renewed in this year. Nevertheless, both Elizabeth and Darcy wished to host some small event to both mark the holiday and to introduce the new Mrs Darcy to the tenants, servants, and villagers.
It had been decided that a feast would be held on the day before Christmas. It was to be a relatively simple event, but one which still required many days of work and planning between Elizabeth and Mrs Reynolds. Their efforts were well worth it; those who were dependent on the great estate were gratified and pleased to be introduced to the new Mrs Darcy, and to partake in a celebration of the holiday with her and the master. But no matter how glad she was to have arranged it, it had tired her substantially.
But her husband was determined to begin the day. He pulled her into his embrace, pressing her back to his stomach, and moving her wild profusion of curls to the side so he could begin kissing her neck.
“Mmm...want to sleep...love you... later…?”
He whispered, “I just thought you might like your present.”
“Christmas was yesterday.” Her words, spoken into her pillow, were muffled.
“True…but today is an even more important day.” Taking hold of her shoulders, he gently but insistently rolled her over to face him.
Elizabeth opened her eyes, recognising she would not be permitted more sleep. She pulled her arms out from under his grasp so that she could wind them around his waist and softly caress his back. “Why is Boxing Day so important to you, love?”
“Because it has been a month since we were engaged,” he reminded her. “Since the night of Bingley’s ball, when you consented to be mine.”
“Only a month?” She smiled up at him, her sleepiness forgotten. “It seems longer, as if I have been yours forever.”
“It has passed both quickly and slowly,” Darcy mused. “In some ways, it seems a trice since the day we met; in others, I can scarcely remember a time when I did not know you. Let us both vow that we shall always be exactly this happy.” He kissed the tip of her nose.
Smiling into his eyes, she said, “I cannot make such a vow, my dear husband, for if this month has taught me one thing, it is that no matter how I love you today, I can be assured that by tomorrow it shall have grown even more.”
His eyes went soft and warm at her words. She knew she did not tell him enough that she loved him but she hoped he never wondered. In that moment she resolved she simply must tell him more.
“Such sweet words.” He kissed her again. “That certainly deserves a present.”
She laughed as he jumped from the bed, walking quickly into his dressing room. He returned just as quickly, bearing a small, flat box. She sat up, reaching her hand towards it but he snatched it away, giving her a naughty look.
“Now, I must say I had hoped this would be a present for us both—should you wish to give me something in return.”
“To be sure! But what would you wish for?”
He leaned toward her, taking her earlobe into his mouth, and giving it a gentle suckle, before whispering, “I want you to wear it immediately and to allow me the pleasure of admiring you in it.”
“That seems little enough to ask,” she agreed, closing her eyes and leaning into his ministrations.
“To be very clear,” he said, “I wish to admire you wearing only this.”
With a gasp that became a laugh, Elizabeth opened the box, finding a delicately beautiful diamond necklace. The chain was so thin that it would appear as if the sparkling gem was suspended on her bosom by magic.
Several hours later, the Darcys were at last at breakfast, with Elizabeth still wearing her new jewels, which looked as pretty when worn with her gown as it had earlier, sans gown. Smiling at her husband, Elizabeth enquired, “What shall we do today?”
“Your wish is my command, Mrs Darcy,” he said. “A walk, read, play cards…anything your heart should desire shall be done. I am yours to command.”
“Oh I like this,” she said with a grin. Then more seriously, she said, “You spoil me, Mr Darcy.”
“It is, above all things, my favourite thing to do,” he said.
And so the day was spent in very pleasant occupation which managed to be agreeable to both Elizabeth and Darcy. They went for a long walk in the snow, and then, just when they were chilled beyond their ability to tolerate it, returned to the house to snuggle by the fire in their sitting room, where they read to each other from the books Elizabeth had given him for Christmas. They played chess before dining, after which Elizabeth played and sang for her husband until both were ready to retire.
And both wholly believed there could not have been a finer Boxing Day had by anyone in the world.
Book Blurb 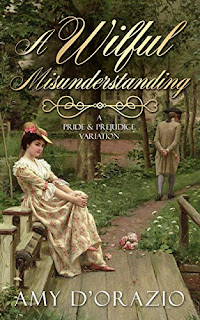 The moment he saw her at the assembly in Meryton, he knew he loved her.
WHEN FITZWILLIAM DARCY MEETS ELIZABETH BENNET in the fateful autumn of 1811, their mutual infatuation is immediate and undeniable. Within months, they are married and spend a blissful winter at Pemberley, falling more deeply in love with each other than either might have imagined possible. But spring in London proves more challenging to them. Accident and artifice join to devastating effect for the young couple, destroying their felicity and creating an outcome neither might have imagined.
TWO YEARS LATER, happenstance reunites them. Sorrow and anger have built walls between them but the love they once shared still remains. Will it be enough to conquer the sins of the past? Is the love they still hold within them strong enough to prevail over the anger and mistrust that tore them apart?

Amy D’Orazio is a long time devotee of Jane Austen and fiction related to her characters. She began writing her own little stories to amuse herself during hours spent at sports practices and the like and soon discovered a passion for it. By far, however, the thing she loves most is the connections she has made with readers and other writers of Austenesque fiction.

Amy currently lives in Pittsburgh with her husband and daughters, as well as three Jack Russell terriers who often make appearances (in a human form) in her book.

Leave a comment for a chance to win an ebook copy of A Wilful Misunderstanding.

I know I won't be alone in being delighted to see this pillar of the jaff world published at last! An amazing story by an amazing author. Congratulations Amy, and best of luck with the launch and blog tour!

Congratulations! 🎊🍾🍾. Thank you for the deleted scene. Best of luck with the launch and book tour!

Love this scene! I’m just wondering why on Earth they didn’t stay at Pemberley? Ok, ok ok! I know, people want more of a story! I’d be happy reading more of this! I might have to read about the two years apart with my eyes closed!

Congrats on the release. Thanks for sharing this deleted scene.

Thank you to all for stopping by to read today! And thank you to Maria for hosting it!

Thank you to all for stopping by to read today! And thank you to Maria for hosting it! -- Amy

I’m excited to read the deleted scenes but plan to wait until I finish the book to avoid any confusion or spoilers. I’m enjoying the book so far!

I would love to read this.

What a lovely scene and I wonder why it was deleted. I enjoy Amy's books. She is a skilled writer and a "must read" for me. Congrats on another publication!

Excellent blog! Do you have any advices and hints for hopeful writers? Because I’m going to start my web soon, but I’m a slight lost on everything. Several thanks!
https://www.professionalessayservice.co.uk/blog/top-10-psychology-dissertation-topics-and-idease

Hi,
Are you looking a photo editor for your website ? I have 4 year experience choose a service listed below.

Hi,
Are you looking a photo editor for your website ? I have 3 year experience choose a service listed below.