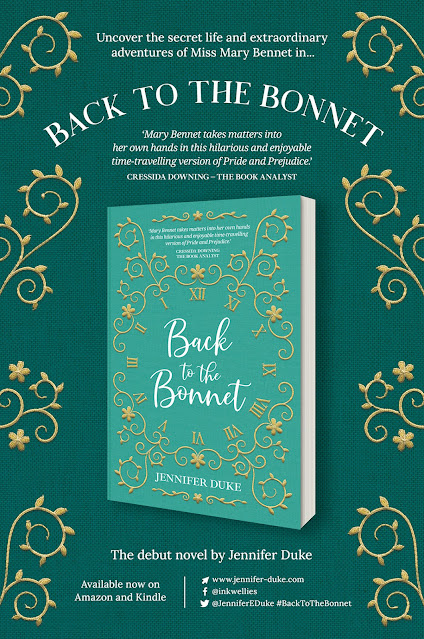 ‘Mary Bennet takes matters into her own hands in this hilarious and enjoyable time-travelling version of Pride and Prejudice.’  CRESSIDA DOWNING – THE BOOK ANALYST

With her family’s fortunes threatened by their own foolish mistakes, deceptive rogues and the inconvenience of male heirs to her family home, the future looks unstable, even bleak. But Mary possesses a secret weapon . . . a bonnet that allows her to travel in time.

In orchestrating events according to her own inclinations, Mary takes an unconventional route to protect her family from ruin. However, she is unprepared for the dark path down which duty and power will lead her.

Read an Excerpt From Volume One, Chapter Three

…I reached Clarke’s library at the same moment that an officer quitted it, colliding into me.

“Miss Mary Bennet!” cried Mr Chamberlayne. “Good Lord!” He stared at me with even more attention than the other officer had done, only there was no hint of threat in his manner. However, I was at the same time unnerved by his regard for he looked a little too long at my bonnet. “Thank you.” He laughed and took my hand. “Thank you!” He repeated, shaking his head and grinning at me.

I withdrew my hand and stepped back. “Have you been drinking, sir?”

“No ‘sir’ please. Call me Chamberlayne.”

“I know who you are, though I am surprised that you know my name.”

“I confess, I did not before today.”

“Pray, explain yourself, Mr Chamberlayne. What might you possibly have to thank me for?”

“No, I suppose you wouldn’t know,” he said, laughing again. “Come, let us talk.”

“But I am unaccompanied, I can hardly—”

“Oh really, Miss Mary!” He lowered his voice and leant closer. “Does convention hold you back? You who deny all conventions of time, twisting it from its proper course?” His gaze lifted to my great aunt’s bonnet again and I instinctively put my hand to it. He nodded.

“But what of my reputation, Miss Mary?” he said when he had caught up with me.

I ignored that remark as well as his childish smirk. This was serious. I had to know how much he knew about the bonnet and what it could do.

We had just walked into the alleyway which led to the graveyard when I froze. In front of me was Lydia, entwined in Mr Denny’s arms, her lips secured to his.

Mr Denny started, breaking away from her.

Lydia looked at me in surprise, her gaze darting between me and Mr Chamberlayne.

“Oh, Mary!” she said. “You’re not interested in the officers too now, are you?” She did not scruple to stifle her laugh at the ridiculousness of this idea.

“Lydia, you really cannot behave so—”

“Oh, don’t make such a fuss, Mary,” she said, frowning at me. “You really can be a miserable old bishop, do you know that?”

Lydia walked off before I could finish my sentence. Mr Denny bowed, lowering his eyes sheepishly – though his lips twitched into a wolfish smile – before making himself scarce.

“He has no right to kiss a girl in public like that, let alone my sister!”

“Eyebrows would be raised even if he was seen kissing his fiancé.”

“His hypothetical one, I hope?” I said.

“Insufferable!” I repeated this word several times as I meditated on the ungentlemanliness of apparent gentlemen on our way down the alleyway.

“The graveyard’s nearly always quiet. I was being practical.” I nodded good morning to the headstone of an ancient, forgotten Bennet. “Now, I shall try to put that business with Lydia and Mr Denny out of my mind for the time being and focus on what you have to tell me. What do you know of . . .” I hesitated, not wishing to betray more information than he might possess.

“Of that bonnet of yours?”

I opened my mouth to speak, then closed it.

He was not smiling. At once, he looked older and more sensible. “The reason why I have to thank you – why I am indebted to you . . . How to explain?” He took a breath. “You came to The Bull. You heard something that made you come around to the yard at the back. You saw—” a flicker of emotion darkened his expression, “you saw Captain Ramton.”

“That horrid-looking man with the brows and the frown?”

“But what you don’t know, Miss Mary, is that you saw him before. That is – now it seems you did not.” He shook his head. “I’m fumbling my way through this – the truth being that I lack comprehension of the whole thing – but you saw him hitting me.” He looked away. “You saw the blood that ran down my face. You heard what he said about me.” Chamberlayne’s voice had become strained.

“Just let me finish. You approached when Ramton left and crouched beside me where I was slumped against the wall. You asked me for a penknife which you then used to adjust something on your bonnet. I could not see what you were doing, one of my eyes was closing up and the other was streaming. You said: ‘This will send you back three hours. Get yourself away from that man.’ You put the bonnet on my head and everything went . . . strange. I thought it was all in relation to the blows I had suffered to my head but then you were gone. I was in my room. The bonnet was gone too. I checked my pocket watch and it was indeed three hours before the time it should have been. I felt a trifle unwell, though the pain had ceased, I could move freely once more without discomfort and I saw no sign of injury upon inspecting my reflection in the glass. Recalling your advice, I left The Bull at once and came into the high street, well before I might run into Ramton.”

“I gave you the bonnet? I sent you back?”

“You did.” He stared at a grave. “I knew he hated me. But I know now what he’s capable of and will be prepared next time. I remember the pain. The humiliation. But he won’t, will he?”

“No. Only the wearer remembers how time played out before.” I said this as if it were a fact I had long known, such as the fact that the earth circles the sun.

“Which is why you do not remember?”

“Which is why I do not.” My head was spinning so I sat myself down. He put his hand to my arm. “I am not faint, Mr Chamberlayne. I have never fainted and nor do I intend ever to do such a thing.” He let go, looking askance at me with a half smile as he sat beside me. “Why does he hate you?” I asked.

He got up, half turned away from me and rested his hand on a gravestone. “You heard what he called me once, in my recollection at least. I do not wish for you to hear it again.”

“I’m sorry. I only wish to understand, not to offend you. I often say the wrong thing and I’m not aware that I’m doing it.”

The darkness lifted from his face. “You did not offend me, Miss Mary. I hope that we shall be friends. Although you don’t remember it, you have been more understanding than any friend I’ve known. If I can offer you any service, you only need to ask.”

“If only you were Mr Denny.”

“You see, he’s the officer I need a favour from.” I told him all about the bonnet and how it had revealed Mr Thorpe’s deception to me.

“Denny would never speak a word against his friend. But do you really think you need him? Why not stop Mr Thorpe from taking Netherfield in the first place?”

“And how do you propose I do that?”

He took the bonnet from my head and put it upon his own. “Come now, Miss Mary. I heard you mentioned as the most accomplished girl in Meryton. Surely you’re not unintelligent?” 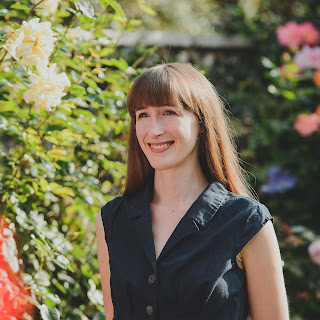 Jennifer Duke grew up in Basingstoke - a town in Hampshire, England, which Jane Austen visited for shopping and balls when her family lived in the nearby village of Steventon. Loving stories from a very early age and being the second of four sisters, Jennifer delighted in reading stories to her younger siblings.
She went to Bath Spa University to study English Literature with Creative Writing and gained a 2:1, later going on to achieve a distinction for her MA in English Literature at Oxford Brookes University.
She has had many jobs - including coffee barista, trainee English teacher, nursery nurse, nanny, housekeeper and dog walker - but kept returning to writing fiction.
A longstanding love of Jane Austen's novels led to her first published novel Back to the Bonnet.

As well as writing, she is interested in mindfulness, environmental issues and painting. She loves animals, history, art, travel and being out in nature. Currently, she is working on a fantasy novel inspired by ancient art at Chauvet-Pont d'Arc cave in the south of France, a story set 35,000 years ago - a slight change from Regency England! She also has plans to write a post world war two romance inspired by Jane Eyre. 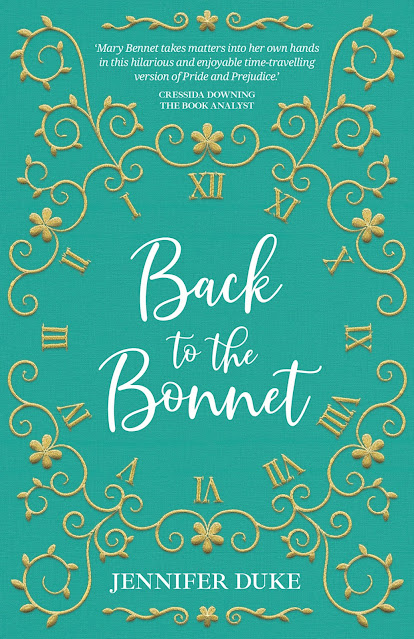 Back to the Bonnet is available now on Amazon in paperback and Kindle eBook formats.