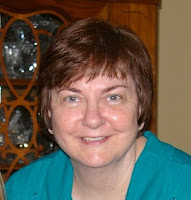 My guest today is Robin Helm who published the first two volumes of a trilogy (The Guardian Trilogy), Guardian and SoulFire, and is presently writing Legacy, the third and final volume, posting as a work in progress on four different forums. She has also published three Regency short stories. She and her husband have two daughters, the elder a Navy nurse stationed in Guam, and the younger a university senior. They live in South Carolina with their Yorkie-Poo, Tobey.
Ms. Helm graduated with a BA from Piedmont International University. She is a member of the Delta Epsilon Chi honor society, the American Legion Auxiliary, and the scholarship faculty of the United States Achievement Academy.

There are many things to love about Austen’s novels, but one of my favorite aspects of her time period is the importance placed upon music. Most well-born, accomplished ladies of Jane’s generation sang or played an instrument. Often, I think I would have enjoyed living during that era – preferably without the uncomfortable undergarments and certainly born into a gentleman’s family. The lack of air conditioning, central heating, electricity, and running water would also be lamentable, but I suppose I could adjust. What I would not change would be the freedom to practice for hours each day and the encouragement to excel. Though I would never have been an excellent walker, I should love to have the time to improve my mind by extensive reading.I smile when I think of Marianne, Mary, Anne, Emma, Elizabeth and others at their pianofortes, though Emma and Elizabeth claimed no superiority at the instrument. Jane Fairfax, Caroline Bingley, Louisa Hurst, and Georgiana Darcy were truly proficient. Those ladies who did not play or sing certainly enjoyed dancing, and the musicians at the balls provided part of the ambiance. The music of string quintets, flutes, and harps was in vogue. One of the best parts of the films of Austen’s works is the music; the soundtracks are wonderful.I majored in music performance with a piano proficiency, and I love to play at every opportunity. In fact, I am preparing to play with a church orchestra this coming Sunday. There will be four performances with the combined church choirs, and I am so looking forward to it. This week I am taking Lady Catherine’s advice and practicing more than I usually do, aspiring to be a true proficient.
I wonder what that grand lady would think of drums and guitars. It makes me laugh to think of it.


Volume I in the Trilogy is Guardian, a religious fantasy fiction. The powerful and imposing Xander/Darcy, Chief of Guardian Angels  has protected exceptional humans from demonic forces over the course of ten millennia without losing a single battle. In 1989, he receives an unusual assignment which will forever change his ordered existence and alter the course of human history. Will he lose the battle for his own heart while guarding supernaturally gifted Elizabeth Bennet from the evil which surrounds her? Will he be strong enough to resist her as she grows from a precocious child into a beautiful, intelligent woman? The veil dividing the physical and spiritual planes is drawn aside to reveal warfare on an unprecedented scale as Elizabeth develops her gifts and her guardian discovers his emotions. 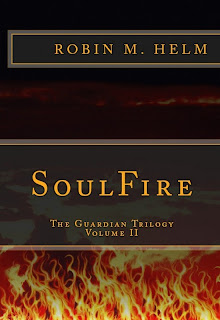 SoulFire, Volume II of The Guardian Trilogy, is a modern Christian fantasy romance written in the tradition of Jane Austen's masterpiece, Pride and Prejudice.


In the second volume of The Guardian Trilogy, Fitzwilliam Alexander Darcy, powerful Chief of all guardian angels, adjusts to life with a dual nature. An angel/human, Darcy seeks to win the love of his  beautiful partner in SoulFire Ministries, Elizabeth Bennet, as they travel together across the country. While keeping his true identity hidden, Darcy joins archangels Michael and Gabriel in defending and protecting Elizabeth from the schemes and trickery of Gregory, the Dark Prince, and Lucifer, his father.
Though the supernaturally gifted team of Darcy and Elizabeth is tremendously successful in their joint mission as they partner with evangelist Jonathan Edwards, the question remains, will Elizabeth find the strength within herself to forgive Darcy for his secrecy after she accidentally discovers the truth, that he was her guardian angel, or will Gregory be ultimately successful in separating this match made in heaven?

Leave your comment below this post + add your e-mail address+ specify the country you write from. You can win the first two volumes of Robin Helm's Trilogy. If the winner is in the US, he/she will win Guardian+SoulFire paperback signed by the author, if he/she is from any other country in the world the prize will be the e-book copies (kindle or nook) of both books. So the contest is open internationally and it will end on April 20th, when the name of the winner is announced. Good luck!

Robin Helm books are on Amazon  and Barnes & Noble
Posted by Maria Grazia at 16:01

I'm not real crazy about super-natural, but my granddaughter would love and appreciate these books. I live in the United States, and Thanks for the giveaway.
lcbrower40(at)gmail(dot)com

Thanks, Linda. I've been told that are the Christian equivalent of Twilight.

Robin, I wish you continued success. I love the concept of this series.

I absolutely love the cover of the angel kissing the woman, sunsets are the best! Love Love Congrats Robin!
Krista U.S.
bookreviewclubblog@aol.com

Thanks, Krista. That's my daughter and a young man from our church.

I'm intrigued by the concept for your books, Robin, and I'd love to read them. Great blog! Thanks!

So exciting to see the artwork for the final book cover. Robin is a writing dynamo, which is wonderful news for her fans! Adventure, romance, tension -- these books have it all.

Prepare to be swept away by Robin's Darcy (Xander) and his angelic comrades. I sure was.

What a wonderful blog today. I never thought much about the music aspect as you so clearly described. I wonder if Jane Bennet could play at all!

Looking forward to reading your books as soon as I finish a commitment I made.

I have visions of you seated at the pianoforte, faithfully practicing those scales, while I enjoyed the shade of a tree and the breeze on my face as I read the latest novel by Mrs. Radcliffe. No, no, I got that all wrong. You are the one reading, and I am the one in the kitchen. Well, so much for accurate visions.

Looking forward to your publishing the explosive conclusion of Legacy, sis.

I also love having a chance to win volumes I & II of the Trilogy.

I have definitely been the one hard at work at the pianoforte for the past week. The concert this weekend has made a Mary out of me!

I was in band in h.s. but, sadly, never learned how to play piano beyond a few kids' songs. Even the piano in Mrs Jenkinson's room would be too good for me. Lol It would be nice to have the leisure time to work on accomplishments all day - reading, playing, riding, learning languages, dancing, learning to flirt with a fan...

This is the first time seeing the cover for Legacy - I love it! Thanks for the giveaway.

I love Jane Austen and Ms. Helms twist of incorporating Darcy as an Angel is beyond what I ever would have been able to imagine. And trust me when I tell you, I have what I thought was a great imagination. I cannot wait to read these books! Wonderful work Ms. Helms!

Thank you for the kind comments.

Monica, you could practice on my piano. It's in my little office, and you would be in nobody's way in that part of the house.

I really need to practice the language of the fan. I had forgotten about that!

Glad you like the cover of Legacy. It's ready to go as soon as I finish writing the book. Three more chapters, and I'll be done!

These are on my TBR! Thank you for the giveaway!!

Robin, I am totaly with you when it comes to music. I know we are kindred spirits in that respect. I have a baby grand in my home and often sit down to play and sing while everyone else is at the computer, watching TV or on some other electonic device. Not that I don't enjoy those devices myself, as it definitely keeps me connected. But to loose yourself in the joy of music and to be able to share that love with others is something we rarely find in today's society. I have a friend who lives in Wilmette, Il and often has an evening of music at her home. Sometimes when I go to her gatherings, I feel like I have stepped back into an Austen novel. Many guests get up and perform and enjoy each others company over punch and dessert. Those times are very special. I am enjoying your books on Kindle and wouldn't mind having hard copies to take with, always better than staying glued to the screen. Thanks again for all of your literary efforts. ~Jen Red~

Oh, thank you for your gracious condescension!

I am totally intrigued by this book premise!

Margay, from the US

That sounds vey intriguing! Supernatural is not my kind usually, but this really sounds like something I want to read :).

I love discovering new books influenced by Jane. Thanks for the giveaway. (Canada)

i tweeted the giveaway - these bks need to be known!

Like the great Lady Catherine, I enjoy and appreciate good music especially if played in orchestras. Some people might find me odd but I prefer to listen to scores from movies and television rather than modern music.

Your concept of The Guardian trilogy is intriguing. Seldom do published Austenesque focus on religious part.

Sorry, I left out my email address and country. I'm from Malaysia.

Love the trilogy & cannot wait for Legacy to come out!
Thanks for the giveaway!
jakki35(t) yahoo(dot) com

Thank you so much, everyone. I have enjoyed reading your posts; you have been most gracious.

Congratulations to the winner! As soon as you reply to my e-mail, your books will be on the way!

Online education is the most efficient way to accelerate your education. Read this articles to know some benefits from taking online courses. View the site for the details.