TALKING JANE AUSTEN WITH … THE CAST OF AUSTENTATIOUS: AN IMPROVISED NOVEL 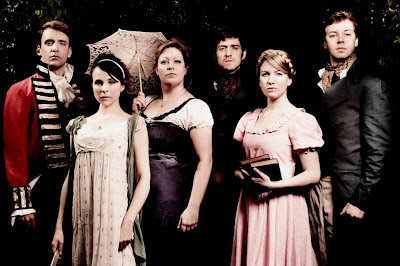 Undoubtedly one of the most talked about shows on the improvised comedy circuit, Austentatious:  An Improvised Novel is an hour long comedy play spun in the inimitable style of Jane Austen and based entirely on audience suggestions. Never has Austen been more hilarious!  A seasoned cast including: Cariad Lloyd (Fosters Best Newcomer Nominee 2011), Rachel Parris (Hackney Empire Finallist 2011), Amy Cooke-Hodgson (Olivier winning La Boheme), Joseph Morpurgo (Oxford Imps), Graham Dickson (UCB) &  Andy Murray (Private Eye) present an eloquent, irreverent, 100% improvised take on the works of our beloved author.  Performed in period costume with live accompaniment, Austentatious is an immersive and hilarious treat for fans of Austen and improvised comedy alike.  Austentatious perform regularly at The Wheatsheaf, Rathbone Place (London)  but have  recently performed at the Edinburgh Fringe 2012.
I contacted Cariad Lloyd who kindly accepted to coordinate an interview with the rest of the  cast via e-mail. This is the result of our exchange. It's time to meet the brilliant Austentatious and enjoy our chit chat about Jane Austen and their own work. 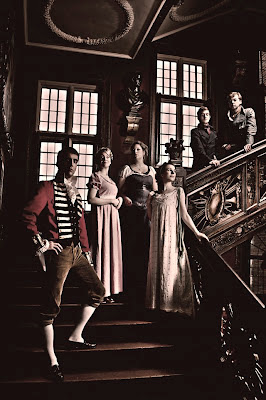 Hello everyone! Glad you accepted to be my guests, Austentatious. My first question is why Jane Austen and not Dickens or Shakespeare ?

We all like Jane Austen a lot, and some of us studied her at University, so it wasn't that we don't like Dickens or Shakespeare but it was a shared love of Austen that made her become our chosen author I think.

Young Jane Austen loved to entertain her family and make them laugh. Do you think  she might have enjoyed the way you entertain your audience through her work?

We hope so! It's very loving adaptations, we often mock the Austen cliches, of dashing gentlemen and ending on a marriage, but it's definitely done from a place of admiration, so hopefully she would have enjoyed it!

Who got the idea for such a peculiar show ? When and how? How did you  6 come together as a cast for Austentatious?

Amy & Rachel came up with the idea nearly 2 years ago now, and pulled the rest of us together. We'd all done lots of improv before, and Amy, Rachel, Joe & Andy were all in a group together at University. We just wanted to do a fun improv format, and we were all fans of Austen and period dramas in general, and I think we all liked the idea of living in that world for a while. 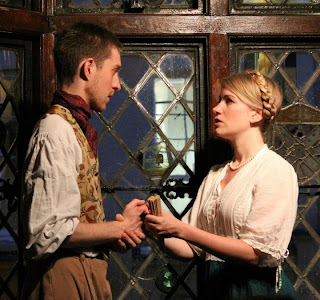 In your show you try even to Persuade Elizabeth Bennet that Mr Darcy is an idiot.  (LOL)  Did you choose to parodize Austen work because you couldn’t stand it or because you liked it?

Cariad : The audience suggest the titles by writing them on slips of paper that look like Penguin Classic books, so that was a title suggested by the audience! We get all kinds of different titles from, "Man-Filled Park" to "North-anger Management" and "Crouching Darcy, Hidden Bennett". So we just take the one we pull out of the basket. We are all definite fans of Austen's work, I don't think you could do a show like this if you didn't at heart love her writing and the world she creates.

She was a master of irony and wit but she lived in a distant , different time like the Regency. How much has the way we laugh and are amused changed? Do we still smile at her subtle irony?

Andy: I think the way we laugh is actually very similar – we laugh at other people's flaws and when Jane writes very sharp, very funny lines they still have the power to make us wince and laugh at the same time. Whenever I read the works I find myself laughing out loud. Nobody ever gets tired of laughing at foolishness, and all these character types – the Mrs Bennets, the Aunt Norrises – are still very much with us today. 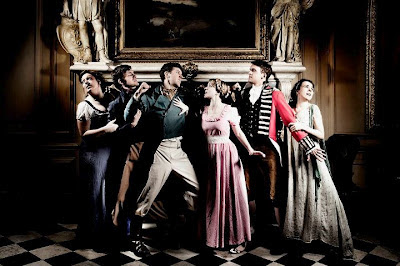 Which ones of the six major novels do you include in your show?

We don't automatically include material from any of the novels – we prefer to present brand new works, with all new characters – but we can do if the audience ask for it! So if (for example) we receive the suggestion for a work called 'Fifty Shades of Mr Darcy', then our show will take place in the Pride and Prejudice 'universe', but it won't be the same as the novel everyone knows.

What  is the strangest, most bizzarre thing the audience suggested  Mr Darcy or Elizabeth?

Do they often suggest to mash-up Austen with monsters, zombies and vampires show?

Andy: We haven't had many suggestions like that! We have had "@Jane Austen: #Zombies', which was a lot of fun. But we do like suggestions which allow us to go beyond the normal Jane Austen world. Sometimes we stray into crime stories, or gothic horror, but even so we try to react in the way that Jane Austen's characters might have done if faced with these situations. I'd love to get a suggestion which allowed us to go to space… 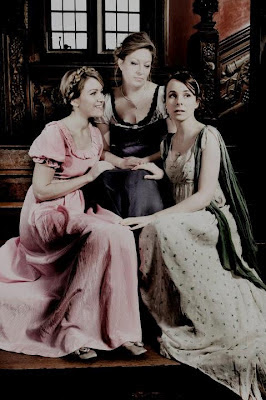 Can someone  totally inexperienced  with Austen enjoy your comedy?

Joseph:  Absolutely. Austen's books are all about distinctive characters, quick wits and high tension - if you like those sort of things, you're as experienced as you need to be. Of course, people who are au fait with Austen and her contemporaries will be able to pick up on in-jokes, references and Austen-specific quirks, but, really, it's all about the story we're creating there on the night.

What’s the most amusing aspect of having to improvise and what’s the hardest, instead?

Andy: The most amusing is being on stage with people whose company you really enjoy and being able to have fun with them. Often it's so much fun that you have to remind yourself there's an audience there, as otherwise you'd just start laughing! As for the hardest, it's remembering all the details people mention at the start of the show – if you hold on to them and bring them back later, it's a great feeling for the performers and the audience, but it's definitely difficult to do

This question is for Joseph, Graham and Andy.  Why are men convinced  Jane Austen is for girls?
Well, considering two of the boys in the cast devoted half a year to studying her at university, we'd beg to differ. Still, I think it's fair to say they are, broadly, feminocentric books: full as they are of female protaganists, they're largely ABOUT girls, even if they're not exclusively FOR them. That makes a difference. More importantly, though, I think the way Austen's books have been marketed in the last hundred years have probably played a bigger role in forming that perception than any word Austen ever wrote. They've got plenty to say to man and woman alike. 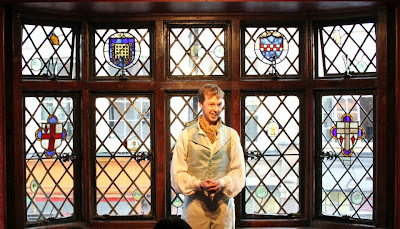 And next one is for Cariad, Rachel and Amy: who among Jane Austen’s men would you elope with and where?
Darcy is obviously a favourite, but we've all got a soft spot for Bingley and Knightley. They're all rather lovely, unfortunately no one is too fond of Mr Collins.

If you could get “lost in Austen” (like Jemima Rooper in the TV series), which scene of which novel would you love to re-live?
The final extant scene of Sanditon. Because then we could do literally anything we wanted.

I know you have fun making them all comical, but what are the most comical Austen characters without your intervention?
They're / have been lots really, it's hard to pick one out. In the last show we had cousins Genevieve & Francesca Larch, who lived with their over-doting Papa, and longed to be courted by Wally the Duke of Marlborough and Lord Brackenbury, but were thwarted by evil servant Smithers, and aided by Wally's housekeeper Old Lady Thatch into a happy ending and a double marriage. And that was just one show! 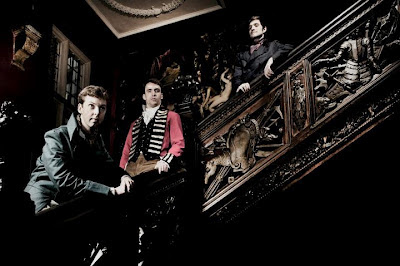 How was your experience at the Edinburgh Fringe? It must have been special!
Edinburgh was incredible! We were on the Free Fringe, and didn't know if anyone would come, but they were queueing an hour early just to get seats! And we were squeezing in 150 people a day, and turning away as many. We were all very overwhelmed and very grateful and how lovely our audiences were and how well it all went.

What has been the most rewarding moment in such an exciting experience?
I think just doing shows that make people laugh and swoon. After most shows people come up to us and say how much they enjoyed it, and that's really all you can ask for.

What are Austentatious’ s  upcoming venues?
We are performing at Leicester Square Theatre on the 15th September in the main space. And we were perform twice a month at The Wheatsheaf pub off Oxford Street. Check out www.austentatiousimpro.com or @austenimpro for details. Please tweet us, we write back to every tweet, and are happy to hear from everyone.

Thanks for being my guests and for anwering my questions. I hope to meet you and enjoy one of your shows in my next trip to London. Good luck to you all with Austentatious, in your future careers and in your private lives. We’ll keep an eye on you hoping to see you live on stage or on screen one day. Fingers crossed!
Thank you! We hope so too!

This sounds hilarious-I have to go and watch them!

@Jane Odiwe
I also wish they will be still performing at The Wheatsheaf pub off Oxford Street next time I am in London, Jane!

Hi dear! You blog is lovely now with new layout!