FIRST IMPRESSIONS, A BIT OF PREJUDICE AND ... WOW! THE LIZZIE BENNET DIARIES!

I'm stunned at how little I've learnt from reading Pride and Prejudice so many times in my life. Why do I resist the main lesson in it? Never trust first impressions, they may be pretty deceitful and often wrong. But,  nope, I go on and on making the same old mistake.
I give something, which I already think I won't like,  a quick look and then I dismiss it before even starting actually getting the gist of it and this happens, you know,  because of my  tendency to pre-conceptions. However,  like Lizzie,  I 'm ready to recognize my mistakes, reconsider and fall deeply in love with "what" I proudly rejected at first.


The "what" I'm thinking of is the popular Youtube series "The Lizzie Bennet Diaries" , for  the discovery of which I must thank the persistent warm recommendations of my Janeite pal Monica, who wrote me more than once asking me why I wasn't watching and writing about it.


Why wasn't I? Good question. Now I'm really ashamed of my feeble objections: American accent?!? I have problems to cope with it as a foreign speaker. A video blog?!? I tend to dislike people talking to a web cam. A modern version of P & P? Not another one, please!?!
Yes, another one! Not any one, though.  After a  last-minute full immersion, trying to catch up with what I had lost (97 episodes!), I can now say that it is simply BRILLIANT!

The 100 episodes have an avarage length of six minutes at most. They were uploaded every Monday and Thursday,  a long vlog series. I’ve seen the whole of it in 3 long sessions without even yawning once! Absolute fun. I couldn't stop and I was sad when I had to.

The actors were great and the scripts ...so clever! I'm not a fan of video bloggers, I don't follow any of them, but I would love to follow other 100 episodes of Lizzie Bennet and her diaries.
The real  modern life touch on the overly familiar fiction  made it so stimulating and unexpectedly pleasant. Nothing was taken for granted nor banal. One might presume this stuff should sound oldish after 200 years... 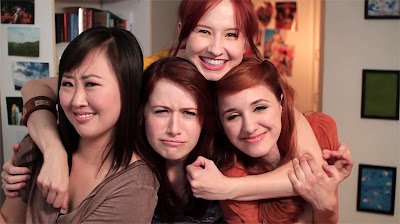 In this totally new version, Jane Austen Pride and Prejudice  becomes a video blog project by the heroine, Elizabeth “Lizzie” Bennet (Ashley Clements) ,   a modern-day graduate student.  Mr. Darcy  (Daniel Vincent Gordh)  is re-imagined as the rich manager of Pemberley Digital, a successful company set in San Francisco, a 21st century taciturn hipster. He accepts to dance with Lizzie when they first meet at a wedding but that will become the most awkward dance she's ever seen in her life and she will feel miserable,  just like Austen Elizabeth in the novel when she hears Darcy say, "She is tolerable; but not handsome enough to tempt me”?

Darcy only appears first time (a glimpse of him, actually) in episode 59 in the series but we already know so much about him at that point: Lizzie has never missed the occasion to talk us about him in the previous episodes. In the following episode, the 60th ,  (Are you kidding me?), the infamous first marriage proposal.

Mr. Bingley has been reinvented as a rich Chinese medical student from Los Angeles, his name changed into  Bing Lee. The five Bennet sisters have become three, Mary Bennet relegated turned into a forgotten emo cousin and Kitty Bennet  into a kitty cat.

In my opinion the most amusing characters are Mr Collins (splendid parody!) and Lydia (really energetic!) though I also liked sweet Gigi (Georgiana) Darcy a lot, each of them for different reasons.

Useless to say my best favourite episode is 98 Gratitude for obvious reasons I won't even  hint at. Or maybe ... Just a clue: My affections and wishes are unchanged becomes  I still feel the same way I felt back in the fall

Beware of spoilers and ... huge sweetness!

Dearest Maria Grazia, guess what I am doing right now? Re-watching the whole series!
Yes, ep. 98 is definitely the climax of the genius in the writing and the acting of LBD

(Later tonight, I am going to tell my experience of LBD addict on my blog.)

I have been obsessed with this web series since November 2012. It is brilliant from beginning to end. I plan on watching all of the episodes again from the beginning, now that it has ended. :(

Well, Banrion, I've only joined the club recently but I've seen the whole of it in three long session. Then I've rewatched some of the episodes so many times now! I can understand your "obsession". Thanks for dropping by. Have a great weekend!

Oh! I love this kind of things: Lost in Austen, LBD, all of it. I know purist austenites thinks it's kind of sacrilege to even watch it. But you've gotta reinvent stories to reach other people. I think it respects the essence of Jane Austen's work and it's funny and light and different...

I discovered long ago but I was afraid to recommend you, I must admit LOL It seems odd to me you didn't mention this before since most of my austen references are from this blog. Glad you join the club.