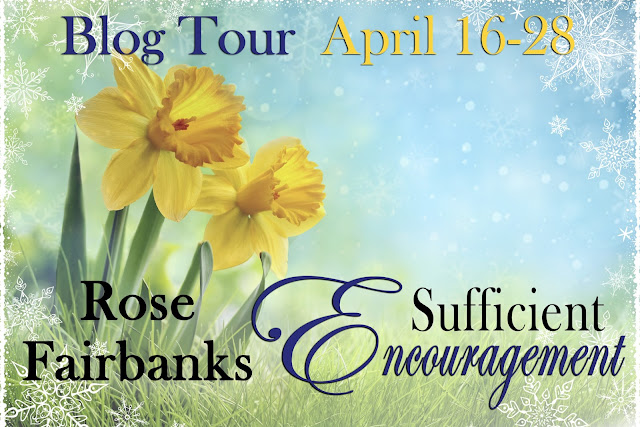 Hello everyone! Thanks for having me, Maria Grazia! In addition to Darcy and Elizabeth battling their own hearts before finding their happily ever after, Wickham presents a larger problem than usual in Sufficient Encouragement. In this excerpt, we see how he ends up in Hertfordshire.
Rose Fairbanks

A militia officer who looked familiar walked into the shop and made a purchase. Settling at a table near him, he asked, “Pardon me, are you done with the paper?”
In closer light, Wickham easily recognised the man. “Denny?”
“Wickham!” he returned while putting forth his hand for a friendly shake.
“How have you been, Denny?”
“Well enough. I joined the militia recently.”
“I can see. I suppose you have found the heiresses as difficult to woo as I have.”
“I do not have your luck at the tables after the lonely wives and widows leave Town to sustain me.”
Wickham grinned. “Nor do you have my charm.”
“The uniform does well enough without me having to say too much.”
“Is that so?”
Denny nodded eagerly. “Indeed. We are regimented now in Hertfordshire. There are several young ladies who are simply wild to meet officers. You should sign up; we need new recruits.”
“I would make a terrible soldier. Besides, I am working on a project.”
“A new heiress has come of age? When last I saw you, the plan was to seduce…what was the name? Miss Danby?”


“Darcy,” Wickham corrected and inwardly seethed.
Denny perked up. “There is a Mr. Darcy currently in Meryton.”
“The Darcy I know would hardly spend time in such a place.”
“He would not care for it?”
“Not unless there are people of fortune and rank.”
“Then it may be the same Darcy after all. I would have little cause to meet with him, but he’s all the households can talk about, and not with favour.”
Wickham could hardly hold back his smile. It did sound like Darcy, but that would simply be too good to be true.
Denny continued, “If it weren’t for his friend Mr. Bingley, I think they may have driven him out with pitchforks by now.”
Wickham laughed outright. “Denny! What tidings you bring me.”
“Now, hold on. If you are thinking of a way to make money off him, I want to be in on the deal, too.”
Wickham paused for a minute. He disliked sharing in his triumphs, but he could ill afford to be miserly. Besides, they were friends for years. He knew the value of that. “Of course, my friend.”
Denny grinned. “So what has that quick mind of yours formed already?”
Wickham shook his head at the compliment and leaned in a bit closer. A few ideas came to mind, but before settling on one, he knew he needed to know more about Darcy’s present circumstances. Why was he in Hertfordshire at all?
Denny reported that Darcy had been there for several weeks now, and Wickham suspected that unless he had severely changed his habits, the friendship of Bingley alone could not be the draw. After all, he was supposed to have been with Bingley in Town for many weeks while his sister was in Ramsgate last June.
One thing he could easily count on, though. Darcy may dislike his presence in the area, but he knew Darcy was too proud to publicly shame him or show weakness and leave merely because of him. On the other hand, Darcy may wish to return to his idyllic existence in his lavish townhouse and his pretty little sister at any moment. Wickham’s conquest would need to begin immediately. 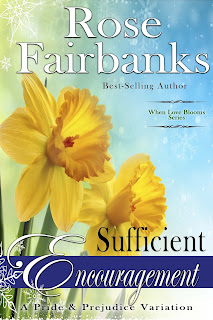 We are all fools in love…
Some say a lady’s imagination is very rapid. Such is the case when Elizabeth Bennet overhears that Mr. Fitzwilliam Darcy admires her eyes. She thinks nothing for herself, but immediately considers her dearest sister’s growing attachment to Mr. Darcy’s friend. If Elizabeth spurns such a wealthy—and proud—gentleman, he might do everything in his power to separate his friend from her sister.
Raised in a world of expectations and pedigree, Darcy knows Elizabeth Bennet can offer him nothing of material value. As his attraction for her grows, he becomes increasingly convinced his feelings are nonsensical. Still, he might forsake it all if only he had true encouragement.
Misunderstandings lead to betrayals and the couple soon learns falling in love takes courage but staying in love requires forgiveness. Traversing from the groves of Hertfordshire to the drawing rooms of London to the complexity and danger of Luddite revolts in Yorkshire, Sufficient Encouragement follows Darcy and Elizabeth’s journey of love and forgiveness.
*This story contains a scene of nonexplicit sexual violence.

About the When Love Blooms Series

“Love is like a flower, for it is well worth the toil to cultivate it.” She shrugged her shoulders, “Love is beautiful.”
Take a stroll in the garden of love and enjoy the unique blooms of the intersecting lives of the Bennet, Darcy, Fitzwilliam, de Bourgh and Bingley families. Sufficient Encouragement follows Darcy and Elizabeth as they fight to save their love from an unexpected frost while Jane and Bingley’s love grows strong roots. The companion story, Renewed Hope, adds depth to the bouquet with the love stories of Darcy’s cousins and Miss Bingley. The third book in the series, Extraordinary Devotion, follows Darcy and Elizabeth’s marriage while their younger sisters experience a London Season. 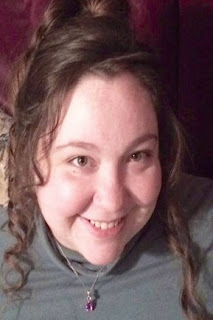 Rose Fairbanks hears book characters talk in her head. They whisper to her of a time when the sun never set on the British Empire. More than having a love story for the ages, these characters face struggles inspired by historical events such as market crashes, Napoleon, embargoes, Luddites, the Year Without a Summer and more. Merging historical research with the timelessness of Jane Austen, Rose currently has ten Pride and Prejudice variations published with several releases planned for 2016 as well as an original Regency Romance series in the works.
Rose proudly admits her Darcy obsession and addictions to reading, chocolate, and sweet tea. Always in the mood for a healthy debate, she also dearly loves to laugh. Having completed a BA in history in 2008, she plans to complete her master’s studies...someday. At the moment, having a career combining her life-long interest in history and research with her love for Jane Austen and the Regency Era consumes all of her professional time. When not writing or reading, Rose runs after her two young children, ignores housework, and profusely thanks her husband for doing all the dishes and laundry.

So Wickham has not kept quiet about Miss Darcy then

He hasn't told Denny that she agreed to an elopement--that would be admitting to a failure--but Denny knows that Wickham was hoping to woo her. But only that she was a young heiress and Denny would like to do the same thing. Denny doesn't know about Wickham's feud with Darcy. Wickham is smart enough to know when to keep his mouth shut...usually.

This looks great. I would love to read this!