GEORGE WICKHAM'S SECRET IS OUT!

It is a pleasure for me to have been invited here to share a moment with you, dear readers, in between campaigns. Indeed, what better excuse to bid my dearest Lydia a fond farewell and retire to my rooms, take up my pen and note down a little something that I hope you might enjoy.

What, though, might a man, a soldier such as I, share with visitors to a salon so esteemed as this? What could I possibly know that might entertain you, might give you reason to afford me a smile?

Well, I turned my mind to this whilst strolling with Lydia in Hyde Park, looking out over the Serpentine that was so quiet now with winter drawing in. The horses thundered on Rotten Row, the carriages rattling this way and that but everyone was, of course, fully and firmly clad.

’Twas not always so.

And I was not always a respectable married fellow, nor were all my days passed in boyish play with my brother and friend, Mr Darcy. I know that you will find it hard to countenance, dear reader, but even I, George Wickham, had my moments of bawdiness. 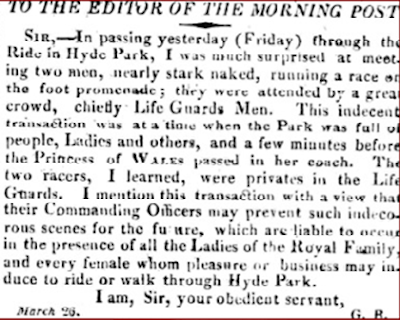 Long ago, never mind how many years, I was mistakenly identified as a Life Guard and made a fleeting appearance in The Morning Post. Below, I have appended the piece in question.

Sir, - In passing yesterday (Friday) through the Ride in Hyde Park, I was much surprised at meeting two men, nearly stark naked, running an arc on the foot promenade; they were attended by a great crowd, chiefly Life Guards Men. This indecent transaction was at a time when the Park was full of people, Ladies and others, and a few minutes before the Princess of Wales passed in her coach. The two racers, I learned, were privates in the Life Guards. I mention this transaction with a view that their Commanding Officers may prevent such indecorous scenes for the future, which are liable to occur in the presence of all the Ladies of the Royal Family, and every female whom pleasure or business my induce to ride or walk through Hyde Park.

I am, Sir, your obedient Servant,

Now, for years I have kept this secret but now, with my position as a gentleman of good character unquestioned, I wish to make a confession. I was one of those two fellows, somewhat unclad, somewhat inebriated and running for his life around Hyde Park, just before the approach of the estimable Princess of Wales, God rest her.

Who the other gentleman was I am not at liberty to disclose and indeed, he is risen to such an exhaled status in government now that he would not thank me if I did. Suffice to say, he is no stranger to His Majesty nor the Speaker.

What prompted me to shed my uniform on that balmy afternoon was, I remember, a wager of some description. Forgive me if the details have become somewhat sketchy over the years, but it may have involved a lady, a tulip - or a daffodil - and a good deal of claret! Whatever it was, and I forget now, it ended in a skyclad dash around the park which, dear reader, I won!

My prize for the victory was an evening with that same lady and her tulip and, ah me, what an evening it was.

Well worth shedding my shirt and giving the princess something to smile about.

George Wickham’s papers are transcribed at Austen Variations   by Catherine Curzon,  a royal historian who writes on all matters 18th century at www.madamegilflurt.com. Her work has been featured on HistoryExtra.com, the official website of BBC History Magazine  and in publications such as Explore History, All About History, History of Royals and Jane Austen’s Regency World. She has provided additional research for An Evening with Jane Austen at the V&A and spoken at venues including the Royal Pavilion in Brighton, Lichfield Guildhall and Dr Johnson’s House.

Catherine holds a Master’s degree in Film and when not dodging the furies of the guillotine, writes fiction set deep in the underbelly of Georgian London.

Her books, Life in the Georgian Court, and The Crown Spire, are available now. She lives in Yorkshire atop a ludicrously steep hill.

Thank you, madam; do pop across to Austen Variations and read my ongoing tale!

very interesting blog, thank you for it. quality and good photos. Who did them?

Jane Austen is one of the most favorite authors. I adore watching the movie that is Keira Knightley. So, I think it's a great idea to create this awesome blog. By the way, if you don't have time for writing your papers because you want to read your favorite book then I recommend you to apply to the essayswriters It helps you to save your time for reading!

If you are want to download Lightroom Preset free Master PsEditor is best option for you.

visit for know about Smartphone price with MobileErBazaar.com in bangladesh

visit for know about Vivo v23e price in bangladesh