Mary Pagones is a New Jersey-based writer, horseback rider (she says with more enthusiasm than talent), and Shakespeare and Jane Austen fanatic. Mary's our guest author with a Q/A post and a book giveaway contest. Her Pride and Prejudice and Personal Statements is a lovely YA Austen-inspired novel which reminds the lively world of Clueless. Ready to read the interview, welcome Mary in the comment section and try your luck in the giveway? (Sorry, US only)

How did the idea of writing a YA modernization of Pride and Prejudice come to your mind?

For the past eighteen years, I’ve worked for a private college consulant. She’s quite a bit like Ms. Desborough, the Lady Catherine character in the novel. It occurred to me that the competition and social wrangling over getting in to top colleges was very similar to the warring over men of large fortunes in the Regency marriage market of Pride and Prejudice.

Did you have to change much of the original plot and characters?

Since this novel is set in a high school and the prize everyone is fighting over is an acceptance to the student’s college of choice, quite a bit! In fact, one of the things Liss (the Elizabeth Bennet character) discovers it that sometimes Jane Austen’s novels aren’t a guide for life...at least, not in the way she thinks...

In Jane Austen’s Regency world a girl’s greatest predicament was to find a good husband. What about your heroine’s greatest concern?

Liss wants to get into a college with enough of a scholarship so she doesn’t end up with Willoughby-level gambling debts. She’s also in search of a sense of meaning and purpose in her life. She loves literature and writing, but she’s in an environment where the pressure is on to find a career that can secure her a large fortune of a salary. Literature and writing at many American high schools have taken a backseat to STEM (science, technology, engineering, and math) subjects.

Ah, but does Mr. Darcy really exist? In any era? There is a Darcy character, but not in the way the reader might expect!

Do first impressions play  an important role in your modernization of P&P?

Yes, Liss—my Elizabeth Bennet character—is intelligent and witty, but also very opinionated and passionate. Of course, these can be good qualities, but sometimes I think people with strong opinions, perhaps especially intelligent ones, can be too confident in their first impressions of people and the world.

Elizabeth Bennet after all these years, and Mr. Darcy (even though I know theirs is a Cinderella fairy tale). I adore their wit and mutual respect. And I think that Darcy probably changes the most of all of Austen’s heroes, psychologically speaking.

If you were a character in Pride and Prejudice, which character would you like to be? Why?

That’s such an interesting question, because the first time (first impressions, indeed) I read Pride and Prejudice, when I was eleven, I was a bit offended that the bookish, plain character of Mary was so dull and priggish. Although I identified with Elizabeth, even then I was painfully aware of the fact that on the outside I seemed like Mary. I think many of us introverted readers in the eyes of the world are Elizabeth on the inside and Mary on the outside.
It’s important to note, though, that Austen’s Mary (as opposed to how some retellings have portrayed her) isn’t really an introvert. She’s self-conscious about the fact she’s plain and tries to make a display of learning and her talent at serious music, even though she just parrots the phrases she reads and isn’t particularly talented.

What do you think Jane Austen and her work can teach our 21t century teenagers?

Literature today tends to fall into two categories—either focused on one individual’s perspective, or, if it’s a very broad and sprawling novel, focused mainly on action and the sweep of history. Austen’s the rare case of a psychologically astute writer who is very aware of how her characters interact with others in society. Many of her rakes and snakes are very witty, but ultimately Wickham and Miss Bingley are not “good people” because their actions cause social harm. Austen clearly values intelligence and an appreciation of literature, but it’s important that those qualities have a positive impact on the lives of others.

Thanks a lot Mary for taking the time and answering my questions. Good luck on your new release!

Thank you so much for asking such great questions! They helped me express and better understand what motivated me to write the novel in the first place! Sometimes the writer is the last to know! 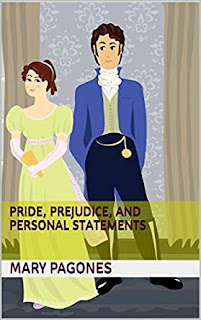 Pride and Prejudice and Personal Statements

But as difficult as securing a marriage to a man with a large fortune may have been during the Regency, the college admissions marketplace of the twenty-first century may prove to be even more perilous to navigate...


Check Pride and Prejudice and Personal Statements on Amazon

a Rafflecopter giveaway
Posted by Maria Grazia at 10:36

I am intrigued by your comment regarding that there is a Mr Darcy character but not in the way the reader might expect. I look forward to learning more. Congrats on this release!

Thanks for the interview, Mary. I always enjoy learning more about how our authors come up with their stories.
I agree with darcybennett about the Darcy character, and look forward to reading the book to see what you mean!

Interesting post and I enjoyed reading it. Would love to read this.

That cover looks so cute!
I like the answer about Elizabeth/Mary. We cannot all be Elizabeth Bennet, I certainly don’t have her wit or extroversion, so I’ve often wondered where exactly does that leave the rest of us?

This sounds like a great book! Looking forward to seeing how the plot is developed!

In the healthcare business, nurses are finding that individuals who have pursued an RN-BSN diploma program tend to be times prepared to proceed from traditional patient care to distinct roles in the health care sector. You can read more at nursing essays