As a reader (okay, addict) of Austen fanfiction for over a decade I have, like many of you, consumed a lot of JAFF over the years, and have seen all sorts of wild liberties taken with the characters and storylines we love so dearly.
One of my favorite tropes in fanfiction is raising antagonists to Supervillain Status, and it’s been done with a lot of characters from Pride & Prejudice – Lady Catherine, Caroline Bingley, and George Wickham (the usual suspects) are often upgraded to evil masterminds with nefarious schemes against our dear Lizzy and Darcy. Even characters like Mr. Collins, Lydia Bennet, and Mrs. Bennet, who are more chaotic-neutral (or idiotic neutral?) than true evil, have taken their turn as villains, as have revered supporting characters like Mr. Bennet, Georgiana Darcy and Colonel Fitzwilliam. So why not the angelic Jane Bennet?

True, there have been a few bad Janes in Austen variations – suffering from minor jealousy or driven by desperation, but more often than not, we at least see Jane realize the error of her ways and attempt to reconcile with the inevitably righteous Elizabeth that inhabits the realm of fanfiction. And that is as it should be, right? Afterall, Jane Austen has given us every reason to believe that Jane Bennet is an absolute angel – certainly Lizzy and the other Bennets think so.
I began to wonder, as I started writing Happier, could such constant praise from her family really be a good thing for Jane? Is she truly so angelic as to be above letting it all go to her head? (Spoiler alert: no, she’s not.) In all likelihood, Mrs. Bennet would have given her eldest daughter a giant superiority complex, from constantly reminding her that she is more beautiful than her sisters, and that this physical beauty is a commodity of sorts, upon which Mrs. Bennet has hung the hopes of their family’s salvation from the hedgerows she frequently laments. Even Lizzy contributes to this poisonous pairing of praise and pressure – she reminds Jane that she is “five times as pretty” than any of the other girls in the neighborhood, and keeps her on a pedestal throughout the book, though at least she does her the small favor of acknowledging her sister’s inner beauty as well.
So how would this saintly creature reconcile these frequent reminders of her superiority against the fact that she is, at the age of twenty-two, still unmarried? My answer: rampant narcissism!

One of the first ideas I had for this book was the idea of chain-actions causing problems for both Lizzy and Darcy. In Lizzy’s case, the chain reaction is that Colonel Fitzwilliam’s older brother conveniently dies, raising him to station of viscount, and drawing the scheming attentions of Caroline Bingley, who talks her brother out of renting Netherfield so that she can stay in London and chase down Darcy’s newly-titled cousin. With no Mr. Bingley at Netherfield when Mr. Collins comes to visit, there is no reason for their cousin to turn his eyes from Jane to Lizzy.
While canon Jane is never as disgusted as Lizzy with Mr. Collins in the first place, in Happier she is both as disdainful of him as her sister, and yet as practical about the situation as Charlotte Lucas. His proposal is the event that triggers Jane’s malicious downward spiral into the toxic behaviors of narcissism – envy, a sense of entitlement, lack of empathy or remorse, arrogance and bragging, flattery of those feed her ego, and abuse of those who do not. Throughout the book, these traits shape her relationships with Lizzy, Mr. Collins, Lady Catherine, Mr. Bingley, and virtually everyone she encounters; her entire perception of reality begins to shift.
The except below is from the prologue of Happier in Her Friends Than Relations, and affords us the first glimpse of an imperfect, narcissistic Jane Bennet, just as her family finally drives her over the edge….

Thanks for joining me on this first stop of my blog tour, and a special shout-out to those of you who have been following Happier since the days of posting on AHA and AO3! As a thank-you for all the wonderful support I’ve received, I have started a give-away[hyperlink to rafflecopter], and will be selecting after each post on the blog tour! See the full schedule for the blog tour below, and click here   to follow me on Facebook for updates on the sequel, coming soon! 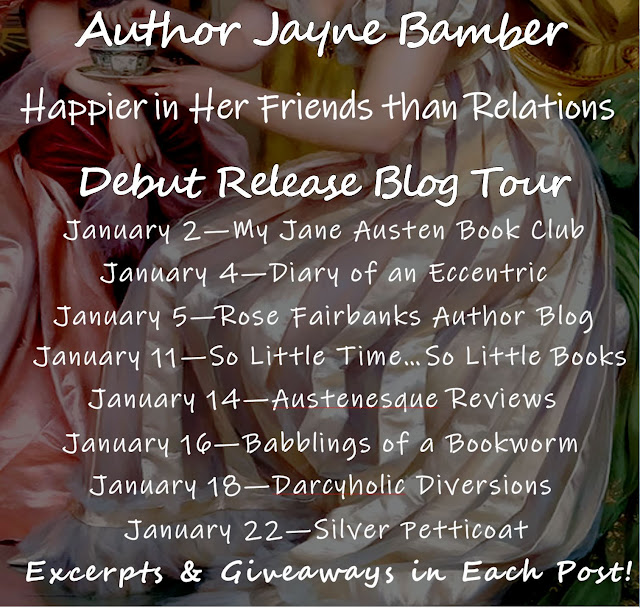 Click here to take your chance to win Jayne Bamber's ebook
Posted by Maria Grazia at 09:07

Love the idea of an evil Jane, always thought she was a bit bland, hopefully your Elizabeth has her faults as well (too many stories make her out to be perfect or near so). Please keep Caroline away from the Colonel, he belongs to Mary Bennet

Oh wow, I think we're all in for big shocks. LOL

But, I'm curious... It is always fascinating to explore the roads not taken idea.

This sounds like a very interesting take on P&P and one that offers a lot of potential for humor and plot lines. Looking forward to reading this one!

This sounds like it is a captivating and very entertaining book. Love to discover new paths.

Oh my goodness! Jane really let rip there, didn't she? One of my Goodreads friends coined an acronym for this trope - NSNJ (Not So Nice Jane) and it fits just prefectly here. Woukd love to read more!

Oh my! Jane is so altered I am speechless. I am eagerly looking forward to reading this book.

I loved your idea about rampant narcissism and sense of entitlement as traits for Jane. I have always thought that it would have been a more likely outcome for Jane than an angelic person we know. Her mother would have spoiled her rotten.
I'm looking forward to reading this book.

So why choose us when looking for professional assistance on writing successful medical school essays ? The answer is obvious. We are the team that conceals no information from our customers. You are always welcome to browse our reviews section to discover how satisfied our customers are. We are very proud of our good name and reputation and we are happy to see every single positive response and evaluation of our best practices. From the number of positive responses on our website you may see that we excel ourselves to meet the highest standards you require and we are extremely good at that.

The fact that you are on cosmetic surgery research paper right now means you have found a company of professional essay writers you can trust. A reputable team of highly educated and vastly experienced essayists, we will make sure that the piece of writing you purchase from us is the best one you can imagine. The writers from our agency have the necessary education to give you a very good argumentative essay on health care or an original research paper on health care because health care issues are among the most prioritized directions of our business.

I can understand how Jane would have felt, up to a certain point. But I would never expect she will go overboard and lay the blame of her marrying Mr Collins on all the other members of her family except herself. Well, you were correct that she is a narcissist, Jayne. Thank you for sharing a perfect excerpt to illustrate your point.

I’m intrigued to read a variation where Jane is evil. Thanks for the giveaway!

I am grateful to the owner of this site which really shares this wonderful work of this site.That is actually great and useful information.I'm satisfied with just sharing this useful information with us. Please keep it up to date like this.Thank you for sharing.. website designing company in patna