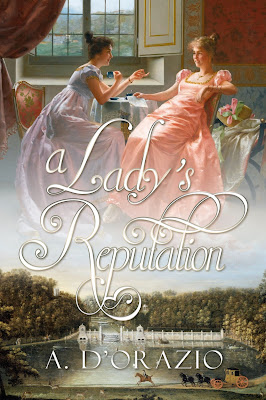 Her refusal is quick and definite—until matters of reputation, hers as well as Jane’s, are considered. Then Mr Darcy makes another offer: summer at Pemberley, so that Jane can be reunited with Mr Bingley and so that he can prove to Elizabeth he is not what she thinks of him. Falling in love with him is naturally impossible…but once she knows the man he truly is, will she be able to help herself?


When Elizabeth woke, darkness had fallen around her. A servant must have entered at some point, for a lamp was lit and burnt low on the fireplace mantel. A look at the clock showed it was nearly midnight. She had slept for almost five hours.
With a sigh, she realised she was quite awake and likely due a long night. Her sense of absolute shame was not finished, Even now, the remembrance of her folly assailed her. I have long prided myself on my discernment and quickness, yet I am now revealed for what I truly am: blind, partial, prejudiced, and absurd. Pleased with the preference of one and offended by the neglect of the other at the beginning of our acquaintance, I have courted prepossession and ignorance, and driven reason away, where either was concerned. Till this moment, I never knew myself.
And what had he done in return? He had proposed marriage to her. He had brought her to his home, shown kindness to her family, and courted her. Just as he turned from Wickham on the streets of Meryton, he could have walked away and never seen her again.If Mr Darcy were truly the haughty, proud man she had believed him to be, the man who claimed unappeasable resentment as his greatest failing, then he could never have forgiven her for all she had done and said to him—not her impertinence to him in Hertfordshire, not her refusal of him in London, and certainly not her slights upon him here. Yet he had done nothing to her that was not kind. His affection, his regard, had been steadfast and sure, though she little deserved it. Why had he done it? What could make a man behave in such a manner as this? To love, ardent love, it must be attributed.
Elizabeth rose from the bed, thinking how she could occupy herself through the long, lonely hours ahead. She deserved every bit of the recrimination that would plague her, but she could not face it. A book? What bit of fiction might distract her from the painful truth of what she had learnt?It was then that she noticed a small, folded piece of paper lying close to her door. She picked it up and opened it, reading, in a man’s firm, decisive handwriting, “Question or Command?”She wondered when he slid it under her door. Likely it was several hours ago, for surely he had long since retired. On a whim, she opened the door. As she suspected, the hall was deserted and dimly lit. She closed it again.
Her aunt had purchased a new book for her on one of their excursions. After lighting another lamp, she settled herself by the fireplace to read it. It was one she had wished for, but she found herself lost in thinking of nothing, her mind a chagrined muddle that could do nothing but visit again and again her many sins and insults against Mr Darcy.
A sound stopped the useless litany in her mind, the quiet brush of paper against the floor. She looked up just as another paper appeared under her door. She hurried to snatch it up, and opened it to find the same message: “Question or Command?”In a trice, she threw open the door to reveal no one. No one was in the hall.She closed the door rather more gently than she had opened it, pensive as she rested her finger against her chin. In the next moment, she took the note inside her apartment to the small escritoire. With all haste due to great anticipation, she opened the container of ink, barely managing not to upset it, and scribbled “Command” on the note underneath the question. A quick wave was all the drying it received before she slid it under the door and into the hall.
Elizabeth stayed close, listening intently, expecting footsteps or some indication of movement. There came none. After a full quarter of an hour (or perhaps only five minutes, but it seemed longer), she opened the door again. Her note was gone.
She closed the door and waited. Before long, another note was slid under the door. It read: “Back stair. Come now.”It was not wholly proper, what he suggested, this clandestine meeting in the middle of the night, but she did not care. Filled with a sense of adventure that happily replaced the shame and guilt she had felt before, she hurriedly put on slippers and went to meet him.
The light had been extinguished, and she nearly shrieked when he revealed himself. “You expected someone else?” he asked with a mockingly stern countenance.
“No,” she said, still smiling faintly, her hand pressed to her bosom. “I expected you.” 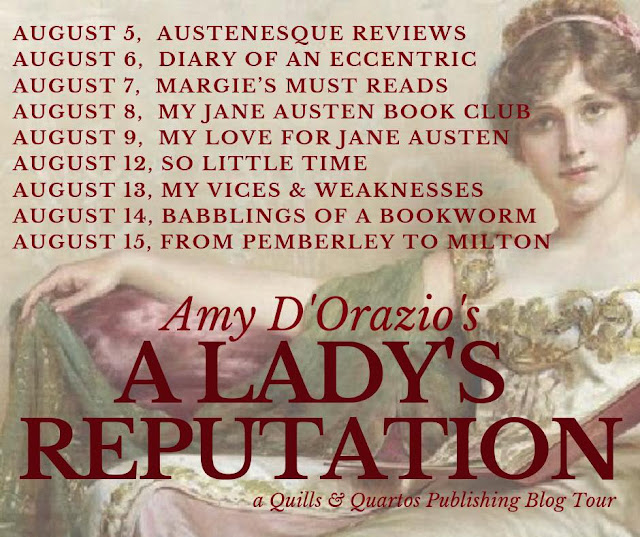 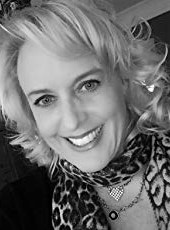 Amy D’Orazio is a long-time devotee of Jane Austen and fiction related to her characters. She began writing her own little stories to amuse herself during hours spent at sports practices and the like and soon discovered a passion for it. By far, however, the thing she loves most is the connections she has made with readers and other writers of Austenesque fiction.
Amy currently lives in Pittsburgh with her husband and daughters, as well as three Jack Russell terriers who often make appearances (in a human form) in her book.Amy’s other releases include “A Short Period of Exquisite Felicity” and the “The Best Part of Love,” a Readers Choice Gold Medal Winner for 2017.
She has also contributed short stories to “Dangerous to Know: Jane Austen's Rakes & Gentlemen Rogues,” “Rational Creatures: Stirrings of Feminism in the Hearts of Jane Austen's Fine Ladies” and “Yuletide: A Jane Austen-inspired Collection of Stories.”

You are encouraged to visit all the stops on the blog tour and comment.  Quills & Quartos Publishing will be giving away one $50 Amazon gift card to one enthusiastic follower! You get one point for every blog stop you visit and leave a comment. Good luck! (See Blog Tour banner)

It has been great hearing about your book and although I am not the reader myself, my 2 sisters and 2 daughters are. They love hearing about the genre's they like and me helping them get to find books they will enjoy. Thanks for sharing!

Oh wow. This is a very romantic excerpt. A clandestine meeting, in this softenerd frame of mind? You are a tease to stop it here!
Thanks!

If they are seen, there could be problems for Elizabeth if she is still not totally sure of her feelings

SO far I like the excepr from this the best. I Loved your Proof of Love book and this might top it as my favorite by you. :)

Enjoyed the excerpt. Hope that they are not discovered.

Oh what a fun new book ! It keeps on sounding better and I cannot wait to read it :)

I loved the excerpt, thanks for sharing. I'm looking forward to reading this book.

Oh, my! I loved the excerpt.

I remember this book and a trip to see the stars, up on the roof (and yes I was singing the song in my head) correct?

A fabulous excerpt and I look forward to more.

Love this. Such a beginning to an adventure.

Hi everyone! Maria -- thank you so much for hosting me today!
Commenters -- thank you so much one and all for stopping by and for such lovely comments. I am away from home and having difficulties with my computer so I can't manage to answer them indivudually! But they are all much appreicated! Wishing everyone best of luck with the drawing!

I am really enjoying this book! It’s fantastic. And surprisingly funny.

I love the question or command game! It does help to forward their relationship.

This passage gave me all the fun bubbly feelings! I just started reading this book, and now I'm even more excited! Thanks for sharing.

This book was so refreshing and different but made it absolutely and totally enjoyable as well as entertaining! We want more!!!

AHHHH!!! I am so excited about this book. Another one for the TBR list!! I just hope I live long enough to read them all!!! Thank you, Amy for the chance of winning the giveaway!

I'm so looking forward to reading thus in my long travel day this next week....thus is sure to make the 14 hours on planes and in airports more enjoyable!

As always, Amy, your snippets are tantalising and wonderful - as are the full stories. I'm so pleased to see this one published. Huge congratulations!

I love Darcy’s dry humour at the end of this excerpt. Thanks for offering a giveaway!

I wonder what MR Darcy's motive is with this? Surely she will be compromised if someone find them. Anyway, not sure what the question on the paper mean. Eager to find out. Thank you for the excerpt, am excited to read the whole story.

I loved the excerpt, nothing like a clandestine meeting to stir things up a little!

I love this excerpt and am eagerly anticipating reading the book. Thank you for sharing.

Such a romantic scene

Ah what an excerpt! Love that Elizabeth is coming to her own realization about Darcy and how he's going to provide her with some adventure! I love this story!

Are Elizabeth and her beau playing a game? I don't really get the context of this excerpt but I presume that she and Jane are staying in Pemberley together with their Uncle and Aunt Gardiner. Am I right?