“Think only of the past as its remembrance gives you pleasure,” as Elizabeth told Darcy, and it does give me pleasure, Maria Grazia, for you to invite me to talk about the past! My Jane Austen adventure began when I won a contest in the JASNA journal Persuasions, as long ago as 1984, writing Austen style dialogue, a little sketch of the chatter of Miss Bates, in Emma. It was so much fun, and I was so pleased at winning, that I decided to do more. Over the next few years I wrote lots of what I thought of as pastiche (the terms Austenesque and fan fic hadn’t yet been invented!), and this led to my writing a full-length novel: Mrs. Darcy’s Dilemma was written in 1992. At the time there had not been a Pride and Prejudice sequel since the 1940s, and I thought it was an idea whose time had come. Two other authors had the same brain wave simultaneously, and there was a fierce competition. I had an excited New York literary agent and was told to expect a bidding war – but no. The others (Emma Tennant with Pemberley and Julia Barrett with Presumption) were better known, I was as yet unpublished, and the publishing world decreed that there was no ROOM for a third Pride and Prejudice sequel, if you can believe that, in a world where there are now hundreds!


“I don’t know what happened,” said the agent, “but put it aside for a few years, and it will sell.” The book was eventually published in England, and then picked up by Sourcebooks. After a diverting detour to write a scholarly biography of my flamboyant, half-Chinese grandmother (she was the first Asian American novelist, Onoto Watanna), I turned back to Austen and wrote what I believe was the first Austenesque internet serial story, “In Defense of Mrs. Elton.” This was written on the Janeites list, then published by JASNA, in 1999, with illustrations by Juliet McMaster, and was followed by “Mrs. Elton in America.” Since then, I’ve never stopped writing my Austenesque pastiche stories and plays, but now I’m very happy to have a new novel again!

What do you see in Austen’s writing that makes her so admired and cherished?

I loved her wit first, and then through many rereadings, increasingly realized and reverenced her exquisite perfection of style. You can read her literally thousands of times (I know!) and yet find something fresh every single time, which is an absolutely unique quality in an author. It might be noticing how beautifully a phrase is turned and balanced, or finding a new sly humorous nuance, or a whole new meaning and way of looking at a character or situation that you never fully realized before. Austen is endless – in the best possible way. 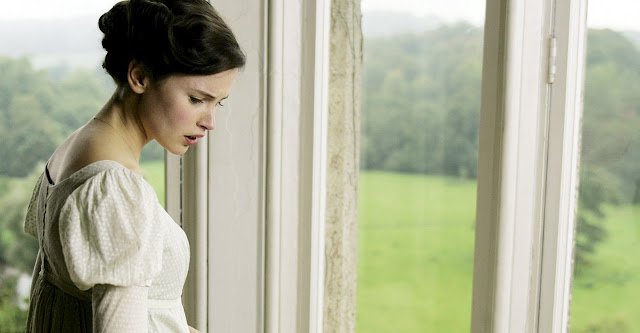 I really enjoyed reading The Bride of Northanger. What was your inspiration to write a continuation of Northanger Abbey, Austen’s Gothic parody?

Actually, I started writing it soon after the last JASNA conference whose theme was Northanger Abbey, in Portland in 2010. I always found Northanger Abbey very charming and youthful and was particularly curious about the central relationship. But life got in the way – little things like full time job (I was a story analyst at Warner Bros, reading books to see if they’d make movies), and health problems for my husband. These things resolved, however. Husband got better, and I retired from job, which left me nothing to do but finish the book!

Henry Tilney, the charming hero of Northanger Abbey, and Catherine Morland the naïve heroine, are some of Austen’s most endearing characters in her canon. What were your challenges to continue their story?

I was always intrigued that such a very clever and sophisticated man as Henry Tilney would fall for such a young naïve girl as Catherine who seemed to have none of his own entrancing qualities. Nice enough girl, to be sure, but not especially brainy nor beautiful. Jane Austen says he loved her because she loved him, which made sense, but I thought there must be more to it than that.  Then while writing a paper about General Tilney, The Ogre of Northanger it occurred to me that Henry was sick of his father’s bullying and manipulation, and that an honest-hearted girl like Catherine would be a complete refreshment to him. And, in The Bride of Northanger I gave her a little more maturity of mind, as she would naturally have developed by the time they were married.

What was your research method to write The Bride of Northanger? Were there other books that you read, or other people that helped you during the process?

There’s no getting away from it, if you’re going to work in the world of Northanger Abbey, you need to be at least a little familiar with the Gothic!  I didn’t want to write an “all Gothic novel,” I mainly wanted to focus on the Austen characters, to get to know and understand them better, yet Gothic story elements there had to be.  So, I did read a few of the tales Catherine and Isabella delighted in and found the works of Ann Radcliffe particularly enjoyable. It turned out to be great fun scattering in the Gothic fancies and a bit of mystery as well!

There is a mysterious miasma permeating throughout your story along with great chemistry in the romance of the newlywed Tilneys. How are your characterizations similar and different from Austen’s?

I tried to imagine Henry and Catherine developing along the lines Austen seemed to indicate.  Austen is very good at suggesting things, which is why people have always been drawn into writing sequels to her novels!  Catherine, under a year of Henry’s tutelage during their engagement, would have read some very serious books indeed, and I found it was amusing to think what they might have been, what studies he encouraged, and what their conversations would have been like. Catherine catches up to him a bit mentally, and I think this makes them more equal and gives them more chemistry. Henry is of course witty and delightful, but some of the Gothic goings-on in my book are perhaps horrifying enough to sober him up a bit! 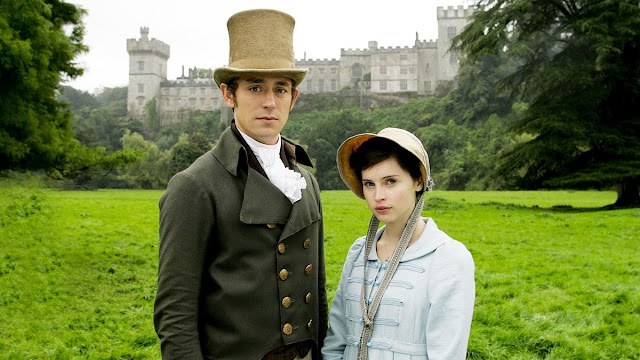 Can you describe where you like to write? What do you surround yourself with to inspire you?

At my computer, in a room full of very old-fashioned books, and three fat cats wandering in and out!

When you are not writing, what is your favorite diversion?


As the original Henry Tilney said in Northanger Abbey, “It is well to have as many holds on happiness as possible,” so I have several favorite diversions. I love reading as well as writing; I try to get my body to England as often as I possibly can; and two more great loves have always been hiking and ballet. My deteriorating knees are starting to limit such physical delights, but I still like walking in the mountains, and never fail to think to myself, “What are men to rocks and mountains?” 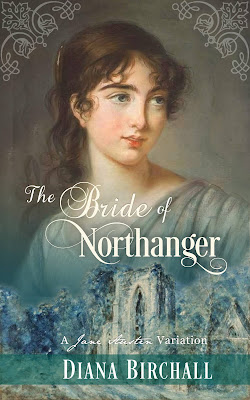 A happier heroine than Catherine Morland does not exist in England, for she is about to marry her beloved, the handsome, witty Henry Tilney. The night before the wedding, Henry reluctantly tells Catherine and her horrified parents a secret he has dreaded to share - that there is a terrible curse on his family and their home, Northanger Abbey. Henry is a clergyman, educated and rational, and after her year’s engagement Catherine is no longer the silly young girl who delighted in reading “horrid novels”; she has improved in both reading and rationality. This sensible young couple cannot believe curses are real...until a murder at the Abbey triggers events as horrid and Gothic as Jane Austen ever parodied - events that shake the young Tilneys’ certainties, but never their love for each other...

“Diana Birchall once again proves herself the worthiest of Austenesque fiction writers, with keen powers of observation, discernment, judgment, fire, genius, and wit on every page.” — Devoney Looser, author of The Making of Jane Austen

“No one captures Jane Austen's vibrant style, sense of humor, intelligence, and voice better than Diana Birchall. I flew through this charming novel, which makes a delightfully spooky and most welcome sequel to Northanger Abbey.” — Syrie James, author of The Lost Memoirs of Jane Austen

“One of the most enjoyable returns to Austen to be found. Not to be missed.” — Susan Franzblau, author and film director

Diana Birchall worked for many years at Warner Bros studios as a story analyst, reading novels to see if they would make movies. Reading manuscripts went side by side with a restorative and sanity-preserving life in Jane Austen studies and resulted in her writing Austenesque fiction both as homage and attempted investigation of the secrets of Jane Austen's style. She is the author of In Defense of Mrs. Elton, Mrs. Elton in America, Mrs. Darcy's Dilemma, and the new The Bride of Northanger. She has written hundreds of Austenesque short stories and plays, as well as a biography of her novelist grandmother, and has lectured on her books and staged play readings at places as diverse as Hollywood, Brooklyn, Montreal, Chawton House Library, Alaska, and Yale. Visit Diana at her Austen Variations author page, follow her on Twitter, Facebook and Goodreads.

Congrats on the release!

Lovely interview Maria. Northanger Abbey is the most underappreciated of Austen's canon. I am so glad to see a new continuation when there are so few available, and by such a prominent author too. I really enjoyed The Bride of Northanger. It was the perfect read during this Halloween season to put me in the mood, and spend some time with Catherine and Henry.

Congratulations, Diana, on your latest book! Enjoy the blog tour.

What a delightful interview! I've had this added to my list since I heard of it, as I love Northanger Abbey! I truly cannot wait to read this one. Thanks for sharing this post!

You started looking for a real college literature lesson homework help online because of some extraordinary sophisticated assignment that is due soon and you have no clue about a way to approach to its completion.
Let’s first be clear on one thing: you buy at College Homework Help and we give great homework help. College demands it. And you don’t have to be involved if you are uninclined to do so. You can give us the assignment, explain what you will, and leave us to complete the work. However, our methodology is set up so that you can reap enormous benefits from the process itself. From the day you complete the buying process, you will get to choose your professional writer, and e-mail communication begins immediately.