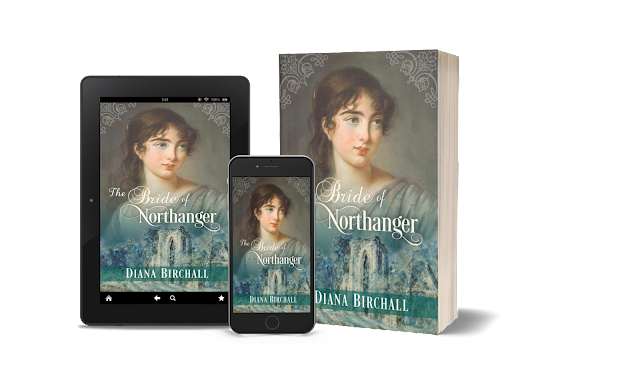 So, I was really glad  when I heard there was a sequel to Northanger Abbey by Diana Birchall coming out and gladly accepted the invitation to take part in the blog tour to promote it.  We have a lot of Pride and Prejudice material to enjoy,  but rarely get to read fan fiction dealing with the other novels. This is why I also accepted to read and review The Bride of Northanger.

"No one who had ever seen Catherine Morland in her infancy would have supposed her born to be an heroine. Her situation in life, the character of her father and mother, her own person and disposition, were all equally against her."

“If Catherine Morland was not born to be a heroine, she ended by becoming something very like one.”

I simply love how Diana Birchall makes her The Bride of Northanger sound a natural continuation of Jane Austen’s tale with that one sentence. I found it a perfect opening. Brilliant! Of course, Diana Birchall  does much more.

She reprises most of what we found in Northanger Abbey: the author’s intention to play with the Gothic genre, a spirited but still a little naive heroine, the  tender love between heroine and hero - who are now married -  all the good and less good characters we learnt to love or hate while reading Austen’s novel, the bleak atmosphere of the Abbey.

Catherine and Henry are the sweet newly-married couple you expect them to be,  but they have no right to some peaceful honeymoon time, since Henry decides to be truly and completely honest to his wife-to-be,  just the night before the wedding, introducing her to a secret in his family, a deadly curse, which everyone’s believe has already brought death in the past.  Add a return to Northanger Abbey, a few deaths, ghostly appearances and mysteries to be solved and you have the perfect Austenesque Gothic read.

Diana Birchall masters  Jane Austen’s humorous style and witty voice, skillfully and convincingly,  so you find yourself back, fully immersed,  in the world of Northanger Abbey.

The story is well designed and owns that ironic touch which makes Miss Austen’s prose so precious. All the characters make their re-entrance keeping the traits and demenours their creator gifted them with in her original juvenile work: General Tilney, Frederick and Eleanor, and even the Thorpes!

The Bride of Northanger is a highly entertaining Austenesque read you must absolutely add to your Austen shelves. 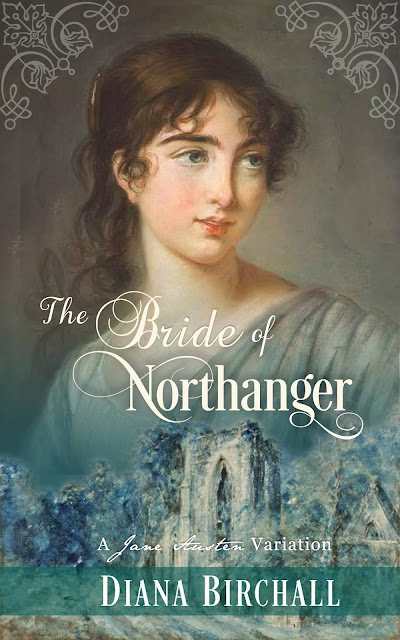 READ MY INTERVIEW WITH DIANA BIRCHALL

A happier heroine than Catherine Morland does not exist in England, for she is about to marry her beloved, the handsome, witty Henry Tilney. The night before the wedding, Henry reluctantly tells Catherine and her horrified parents a secret he has dreaded to share - that there is a terrible curse on his family and their home, Northanger Abbey. Henry is a clergyman, educated and rational, and after her year’s engagement Catherine is no longer the silly young girl who delighted in reading “horrid novels”; she has improved in both reading and rationality. This sensible young couple cannot believe curses are real...until a murder at the Abbey triggers events as horrid and Gothic as Jane Austen ever parodied - events that shake the young Tilneys’ certainties, but never their love for each other...

“Diana Birchall once again proves herself the worthiest of Austenesque fiction writers, with keen powers of observation, discernment, judgment, fire, genius, and wit on every page.” — Devoney Looser, author of The Making of Jane Austen

“No one captures Jane Austen's vibrant style, sense of humor, intelligence, and voice better than Diana Birchall. I flew through this charming novel, which makes a delightfully spooky and most welcome sequel to Northanger Abbey.” — Syrie James, author of The Lost Memoirs of Jane Austen

“One of the most enjoyable returns to Austen to be found. Not to be missed.” — Susan Franzblau, author and film director

Diana Birchall worked for many years at Warner Bros studios as a story analyst, reading novels to see if they would make movies. Reading manuscripts went side by side with a restorative and sanity-preserving life in Jane Austen studies and resulted in her writing Austenesque fiction both as homage and attempted investigation of the secrets of Jane Austen's style. She is the author of In Defense of Mrs. Elton, Mrs. Elton in America, Mrs. Darcy's Dilemma, and the new The Bride of Northanger. She has written hundreds of Austenesque short stories and plays, as well as a biography of her novelist grandmother, and has lectured on her books and staged play readings at places as diverse as Hollywood, Brooklyn, Montreal, Chawton House Library, Alaska, and Yale. Visit Diana at her Austen Variations author page, follow her on Twitter, Facebook and Goodreads.

THE BRIDE OF NORTHANGER BLOG TOUR CONTINUES AT ...

Lovely review Maria. Diana's ability to continue Austen's story and then make it her own is remarkable. I particularly enjoyed Henry and Catherine's relationship and the many surprises and twists in the Gothic plot. She really is the Doyenne of Austenesque fiction. I am so glad that you enjoyed it too.

Interesting! I admit NA is probably my least favourite JA novel, in part because I find Catherine Moreland so naive and young, but I’m open to understanding her and NA better and a good book inspired by the novel can do the trick! Thank you for the review.

This is a list with all the possible Trait Cheats that are in The Sims 4 and their expansions and game packs. These Cheat Codes are all tested and working!-Sims 4 cheats.