PRIDE AND PYRAMIDS BY AMANDA GRANGE AND JACQUELINE WEBB - MY REVIEW 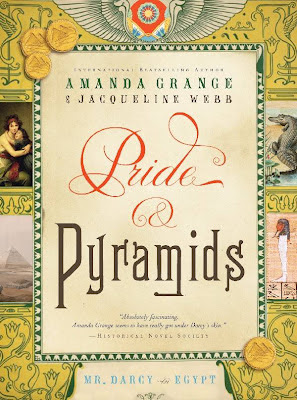 Fast paced and with the exotic charm of Egypt added to the appeal of the Regency world, Pride and Pyramids is a delightful surprise.
Mystery, legends, superstitions enter the lives of the pleasing and proper Darcy family on visiting the land of the Pharaohs.
Defying a magician’s wrath as well as the legend saying magical plagues affect archaeologists , the Darcys  seek the tomb of Hammon and Husn to uncover its hidden treasure.
Elizabeth and Darcy have been married 15 years now and have 6 children. Their life at Pemberley is quiet and comfortable but lacks adventure. This is why they can’t resist the proposal of Edward Fitzwilliam, Colonel Fitzwilliam’s younger brother, and join him in his intriguing expedition to the exotic land of the Sphinx with their family and friends. Not only immeasurable riches await them but also danger and betrayal.
Familiar characters from Pride and Prejudice and new lovely ones enliven this novel, which  is the result of the combined efforts of Amanda Grange - best-selling
author of Mr Darcy’s Diary and Mr Darcy, Vampyre -   and Egyptologist Jacqueline Webb.
Are you willing to meet Mrs Bennet again and being amused at her hectic ways? She’s fully active and travels with the rest of the family taking care of Elizabeth’s six children and directing their tutors and governesses.
Are you ready for romance? Elizabeth and Darcy re-discover their romanticism  watching the sun rising after climbing onto the top of a pyramid and their love is reinforced by the risky adventures .
But there are new charcters too seeking their happiness in love.
Sophia Lucas is the object of the loving cares of both Edward Fitzwilliam, Darcy’s young  cousin,  and Paul Inkworthy, a poverty – striken  artist who is travelling with  them to draw the beautiful sites they visit and take records of the unforgettable moments. Which  of the two loving men will Sophia choose? She actually likes them both!
Among the new characters you’ll also meet, Sir Matthew Rosen, the leader of the expedition, who is an authority on Egyptian tombs and  Sir Mark Belligham, a wealthy baronet who seems highly interested in the expedition. He follows and spies on the Darcys from a distance along their trail. But be warned!  He hides a notorious rascal behind his noble appearance and the name of Bellingham. Someone we well know,  one of Mr Darcy’s old rivals  in search for his revenge...

Pride and Pyramids is available both in kindle version and as a paperback at amazon.com and amazon.uk

Love the premise of the book. I'm looking forward to the interview.

It sounds great! I think the whole different culture thing is captivating. I can hardly wait to read it.