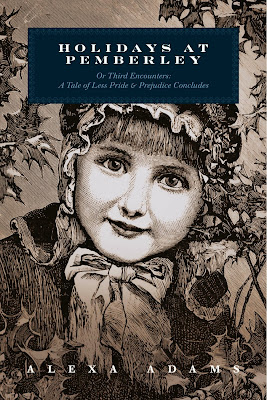 “Mr. Darcy is the best of men, and there is no danger of inflating either his or my vanity by making sure everyone acknowledges this fact.”

“Is there not?” her Charlotte chided. “Perhaps vanity poses no danger, but what shall you do when he does something truly exceptional – by Mr. Darcy standards, of course? Will not such accolades become commonplace if too readily invoked? You must save your loudest applause for special occasions and not become too appreciative an audience.”

Holidays at Pemberley, or Third Encounters: A Tale of Less Pride and Prejudice Concludes is a book written out my own pressing need to complete the stories of my reimagined cast of characters. While the book is ostensibly focused on Charlotte Lucas, it is just as much about Elizabeth and Darcy, the entire Bennet clan, Darcy’s extended family, and, to an extent,  the Wickhams. I had intended Second Glances: A Tale of Less Pride and Prejudice Continues to wrap up their adventures, but as I finished the final drafts of the story, the hanging threads proved too irksome to bear.

Second Glances originally included Charlotte’s romance with David Westover, the rector at Kympton, but I cut it because it didn’t mesh with the rest of the plot. It was intuitive to resurrect their minor storyline and structure a new plot around it, one which provided my flawed characters with an opportunity to learn those vital lessons Austen taught so well. There was still so much to be desired from them! My Darcy may not have begun so proud, but he was still unforgiving:

“It is insupportable, Elizabeth!” he declared. “I cannot sit down to dine with the Wickhams. They must leave at once!”

And my Elizabeth, if not terribly prejudiced, was her husband’s equal in holding a  grudge:

“It is little less than she deserves,” Elizabeth said, her chin set stubbornly. “Both shall have to reap what they sowed.”

“I believe I was hasty in my youth to relinquishing the idea. Had Mr. Darcy lived, and had I still then the benefit of his mentorship, I’m sure I would have acted differently.”

And my Lady Catherine retained the capacity for this outburst:

“Darcy!” she barked. “Am I to sit at table with such company? Are the shades of Pemberley to be thus polluted?”

All these issues needed to be addressed, and my efforts took me back to my original tale, First Impressions: A Tale of Less Pride and Prejudice, at the end of which Holidays at Pemberley begins. The new book, in turn, ends with the following excerpt. I know it’s rather unorthodox to introduce a book with its conclusion, but this is the scene that brings Elizabeth and Darcy’s story full circle, right back to where I first meddled with them at the Meryton Assembly. I think it a strong representation of the intent behind the entire novel. Please enjoy the happily ever after.

Elizabeth, stationed across from her husband, smiled as those nearest and dearest to herself assembled. She noted with surprise as her father led her mother to the line, “Look, Fitzwilliam! My father is dancing, and after having always refused to do so! I have never seen them perform together before.”

Darcy smiled knowingly, “Is it not proper for a gentleman to sometimes partner his spouse?”

Gauging his calm demeanor, Elizabeth narrowed her eyes suspiciously, “My own dear husband, might you have something to do with this unprecedented mark of attention on my father's part?”

“Do you accuse me of interference, Mrs. Darcy?” he exclaimed with an air of assumed innocence, but upon meeting her incredulous eyes he forsook the false demeanor. “I might have said something to influence Mr. Bennet. He seemed on the verge of retreating back to the library after dinner, but upon my suggestion he agreed to remain and do his duty to his wife.”

“You are a most extraordinary man, Mr. Darcy,” she said, aglow with the purest delight.

“Not at all!” he disclaimed. “It is only that I am constantly striving to prove myself worthy of my wife.”

“You are so worthy, my dear, that I believe this is an occasion upon which you deserve my highest reward.”

“And what treat could possibly offer greater delight than to simply enjoy this dance with my most beloved wife?”

Her eyes twinkled mischievously. “To enjoy the dance in total silence.”

About the Author, Alexa Adams

A devoted reader of Jane Austen since her childhood, Alexa Adams is the author of Tales of Less Pride and Prejudice, Emma & Elton: Something Truly Horrid, Jane & Bingley: Something Slightly Unsettling, and the short story collection And Who Can be in Doubt of What Followed?: The Novels of Jane Austen Continued. Alexa resides in Delaware with her husband, daughter, and cat. She blogs about Austen and Austenesque literature at alexaadams.blogspot.com.

Win Holidays at Pemberley! There are two copies kindly provided by author Alexa Adams for you: an e-book copy for readers living everywhere in the world and a signed paperback copy for US readers. Take your chances in the rafflecopter forms given below. The contest will end on October 16th.

a Rafflecopter giveaway
Posted by Maria Grazia at 21:16

Thanks Maria! The post looks beautiful. It's always a pleasure stopping by.

i would love to read this book!!!
thank you for the giveaway!!!

this post is captivating as is the book which would be a treasure to own. Many thanks. saubleb(at)gmail(dot)com

I would love to be able to read this book in it's entirety......I don't know how to tweet ...sorry. If I could I would. Thanks for giving us another book we can fall in love with.

Thank you for this opportunity! I love the holidays season!

My favorite sequels always center on the Darcys at Pemberley during the holidays. Thank you for the opportunity to participate in the contest!

Can't wait to read this!

"You must save your loudest applause for special occasions and not become too appreciative an audience.” Ooh that Charlotte was a wise married woman, gotta love it.

I love this excerpt, too! I read another one on a different blog recently, and now I really, really want to read the full book. :)

Hi! Thank you for the giveaway! I'd like to read this book very much!!

A mischievous Fitzwilliam Darcy is always welcome! Wickham is NOT so welcome, but I must trust the author to deal with the Wickhead Wonder. XD

I'm reading "First Impressions" and I love it! Hope I'll read "Holidays at Pemberley" soon, Charlotte is one of my favourite character!