MERITS AND MERCENARIES BY A LADY - A REVIEW 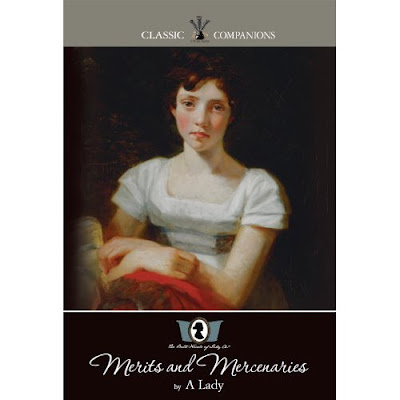 This novel was a pleasant surprise in its originality, a newly written story planned and narrated following Jane Austen's style, wit and sharpness with intelligence and talent. Not a sequel nor a prequel, not a spin-off, none of the protagonists or characters are taken from Austen's major six, nonetheless Merits and Mercenaries does take readers back to those charming atmospheres and plunges them into the dynamics and manners of the society Austen herself so brilliantly depicted. What is remarkable is the skillful echoing of Jane Austen's wit and irony through refined diction and detailed research.
Merits and Mercenaries is the first published novel in an ambitious and promising project of seven,  called The Bath Novels of Lady A. ,  defined as  Regaustenian  .
I was intrigued as soon as I started reading the Preface to the novel itself, which is a smart fictional connection between Jane  Austen's biography and the so-called Bath novels. It relates the mysterious story of how fortuitously Cassandra Austen came to own a series of manuscripts after her beloved sister's death - seven "dissidents" which quite differed from the perfect published major six - and why she decided to leave them to a person Jane trusted and love, Miss Anne Sharp.
The tales are so tacitly attributed to the"devil" of Jane Austen's quill but written by a lady , who doesn't reveal her identity,  but in her thorough and creative tribute to that genius demonstrates great love and respect.
The plot develops between Hampshire and London  following the pursuit of love and self-discovery of trusty and admirable protagonsits such as Mr William Halford - as honorable as handsome and of excellent breeding - and Miss Katherine Huntley - intelligent, beautiful and truly generous young woman.  Their path to the fullfilment of their wishes will not only be full of menaces from unscrupled villains but also made hard by their own praiseworthy principles,  which will turn themselves  into obstacles and delay the two young lovers happy ending.
Vividly written villains crowd the tale and make the comedy in it become often drama. The opposition of good and evil is, of course,  the main contrast leading the thread of the events but there are others very Austenesque clashes: the country and the town, duty and love, comfort and poverty, appearance and reality, sense and sensibility.
Amusing  and  well-written, I'm glad to add Merits and Mercenaries to my "Austenesque Reads" shelf .

Politics & Polemics / The Arch ‘A’ in Austen. Guestpost by Lady A.

Just my kind of book! Congrats on the wonderful review, Lady A~!

Thank you Maria for such a welcome & wonderful review! I shall always be indebted & promise you your own fair copy of every 'Bath Novel'; the second of which will be very special i.e in its very unique tribute to Jane!

Wow. Thanks for the heads up on this book. I'm going to add it to my must-read file. Sounds very intriguing--a different version/twist of Carrie Bebris' books, which I love.

Sounds like a wonderful read! I have already had this novel come highly recommended to me so it is on my wish list.

Thanks for the review!

Sigh, another book to add to my TBR list! Dang!
Sounds wonderful and my appetite is thoroughly whetted.
Grace x