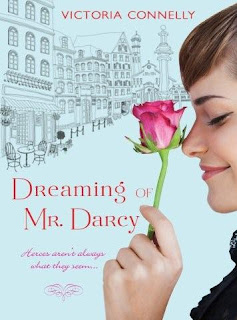 I read The Perfect Hero, liked it  and reviewed it in June 2011,  when it came out for HarperCollins in the UK. Now Victoria Connelly's second book in the Trilogy, The Austen Addicts, has been published in the US by Sourcebooks as Dreaming of Mr Darcy.
New author interview and new giveaway for the readers of My Jane Austen Book Club! Read through the interview, leave your comment and e-mail address to enter the giveaway of a copy of the just released US edition. This giveaway is open worldwide and ends on January 30th  when the winner is announced.
This novel was previously published as  The Perfect Hero  in the UK (my review is  here).  Is there any particular reason for the change of the title,  Dreaming of Mr Darcy ,  in order to fit the US market?
This novel has actually had three different titles!  I originally called it “The Illustrated Darcy” which is the title of the book my heroine, Kay, is working on.  Unfortunately, I was the only person who liked that title so it got changed to “Dreaming of Mr Darcy” but then my UK publisher decided that it didn’t want a second book with the name ‘Darcy’ in it so I came up with “The Perfect Hero”.  I have to admit to still preferring my original title “The Illustrated Darcy”, though!
Your new book  is set in Lyme Regis where a troupe is shooting a new adaptation of Austen’s Persuasion. What position is Jane’s last novel  in in  your  personal “Austen Major Novels  Chart”?
It’s definitely in my top three which are: “Pride and Prejudice”, “Sense and Sensibility” and “Persuasion”.  I love the sparkling wit of “Pride and Prejudice” and the fascinating relationships of “Sense and Sensibility” but there’s a beautiful melancholy about “Persuasion” which really resonates.
Since the characters in the story are involved on a film adaptation of Austen, what is your opinion on the many series or films we’ve had so far? Do you like them? What are your favourites? Do you  think they are more an invitation to read Austen’s work  or more a distraction from doing it?
I came to Jane Austen through the 1940’s film adaptation of “Pride and Prejudice” staring Laurence Olivier.  I watched it as a teenager and then read the book and I think the adaptations do encourage people to pick up the books if they haven’t discovered them already.
I adore the adaptations – can’t get enough!  Favourites includes the BBC “Pride and Prejudice”, Emma Thomspson’s “Sense and Sensibility” and “Persuasion” staring Amanda Root as Anne Elliot.  I also thought the recent Andrew Davies adaptation of “Northanger Abbey” was wonderful and have to admit to having a big crush on Henry Tilney!
Kay Ashton and Gemma Reilly are the two female protagonists of  Dreaming of Mr Darcy . They are present-day heroines but are they anyhow modelled on Austen heroines?
I wanted to create my own characters but there are lots of little nods to Jane Austen in my trilogy.  The most obvious one is Kay’s similarity to Emma Woodhouse because she loves to meddle and matchmake and, like Emma, seems to always get things wrong.  I think Gemma is a little like Anne Elliot because she finally finds the courage to stand up to her family and makes an important decision that will change her life.


What about  the heroes, dashing Oli Wade Owen and  sensitive Adam Craig?
There are some wonderful ‘villanous heroes’ in Jane Austen like Willoughby and Wickham and I think Oli Wade Owen is in a similar mode although not quite as bad, I like to think!  He finds it very easy to attract the ladies but he doesn’t always treat them well whereas Adam Craig is much more like Mr Darcy or Edward Ferrars – he doesn’t find it easy to speak his mind but he cares desperately about the heroine and has a good heart.
And, on a shallow note,  who would you rather spend a romantic weekend with between Captain Wentworth and Mr Darcy?
Oh, don’t make me choose!  Oh, all right then – it would have to be Mr Darcy because he is the ultimate hero, isn’t he?
What’s next in your  Austen-inspired writing trail, after “A Weekend with Mr Darcy” and “Dreaming of Mr Darcy"?
The third book in the trilogy is  Mr Darcy Forever  which is available on Kindle in the UK now and comes out in the US in paperback in April.  It’s about two estranged sisters who meet again during the famous Jane Austen festival in Bath.  This is the novel which is most closely linked to an Austen one because I wanted to explore the relationship between two very different sisters.  Oh, and there’s a love story between a young woman and a much older man.  Can you guess which Austen novel I was inspired by? Some of the characters from the first two books also make an appearance!
I’m also writing a Christmas novella sequel to the trilogy in which all the main characters from the three books meet at a special festive Jane Austen conference at Purley Hall in Hampshire.  It will be available on Kindle in time for Christmas 2012 so do watch out for that too!
We'll watch out for every new title from you, of course. Thanks  a lot,  Victoria,  for visiting My Jane Austen Book Club once again. Good luck to you and your "Dreaming of Mr Darcy"!

P.S. to readers:  Want more chances to win?
Here are some other Dreaming of Mr. Darcy giveaways!

I can't say that I would have chosen Mr. Darcy over Wentworth. Persuasion is my favorite novel of all time and I would love to spend time with Captain Wentworth!

I'd choose Mr Darcy, as well. I'm so looking forward to reading this and seeing what Oli and Adam are like.

That is interesting about the book titles. I did not realize one's book title could be hijacked.

Look forward to the new book and meeting the new characters.

I'll pick Mr. Darcy too! I think a friend of mine already read A weekend with Mr. Darcy, i'll run to my bookstore to see if they have a copy. Would love to read this sequel! Thanks for the chance!

Mr Darcy all the way! Victoria Connelly is a wonderful author. I first found out about over a year ago and had to wait many months until I could purchase her books in the US. A friend of mine who lives in the UK offered to buy me her books and ship them to me, but I waited until they were released here!

Victoria Connelly has developed some fascinating story lines for these characters. The novella coming at Christmas will be just the thing to tie up any loose ends. I am looking forward to reading all these books. Thank you for the giveaway!

oh wow!! sounds like an interesting read!! already added to my WishList!!!

Lovely interview btw. What caught my attention is why there are 2 different book titles for the same book.

I would love a chance to own the US cover edition because it is beautiful. Thanks a lot

Captain Wentworth or Mr Darcy, that's a hard one. Persuasion is my favorite but Pride and Pejudice was my first Austen novel. I'll have to go with my first love Mr. Darcy.

Thank you for the interview and the giveaway! I think your book sounds very interesting and I'd love to have the chance to read it :-))

MR. DARCY:> thanks for the giveaway! I'd love to read this!

Thanks for your comments, everyone. Hope you enjoy the book. I loved writing the trilogy so much!

I really enjoyed A Weekend with Mr. Darcy so I'm looking forward to this next one (no matter what the title is!). It never occurred to me that an author didn't have final say as to the title of his or her work.

Congrats on publishing and for hosting a giveaway!

O__O I cannot belive it, whoa you have open this giveaway to worlwide
thank you !!!
i'm not only dreaming of darcy but also of this book XD

This book sounds really interesting. I'd love to read about a modern mixture between Edward Ferrars and Mr. Darcy!
Thanks for the giveaway! This is my email address: pato3_89(at)hotmail.com

I so wanna read this lovely book, even with 3 different title all sounds great, I'm sure the story is beautful. Love Mr. Darcy.