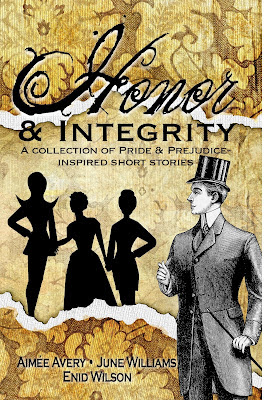 My Jane Austen Book Club welcomes Aimée Avery, co-author of the book Honor and Integrity: A Collection of Pride and Prejudice-Inspired Short Stories. Thanks for coming by today, Aimee.
Thank you for having me.

What made the three of you decide to write a book together?
Enid thought it would be fun to challenge June and me to write stories that contained the words “honor” and “integrity.” It seemed an easy idea since those two words are the perfect words to describe Mr. Darcy.

Is this the first time the three of you have written anything together?
More or less. The three of us have belonged to the online JAFF community for years and read each other’s stories and comment. But other than scribing drabbles/flash fiction with the same theme, this is our first attempt at a joint publishing project.

Did you find it difficult to work together?
Not at all. I think because we’ve known each other within the community for so long and read each other’s works that this was just an extension of that. Our biggest problem was the time difference between California and Sydney.  If you ever get to California, Maria, we’d love meet and visit with you.

Thank you! I’d like that. Have all of you met in person?
Sadly, no. June and I have gotten together several times since we both live in California. We’re about 250 miles apart so we don’t see each other that often. Enid is in Australia. She came to USA before she ventured into JAFF, so neither June nor I have had the opportunity to meet with her in person. I’ve traveled to many places, but not yet to Australia.

What do you think Jane Austen would say about the stories in your book?
I think she would be diverted we’ve become so attached to her characters that we created new stories with them.  I’m sure a few passages in this particular book would make her blush, maybe wonder about modern society. She might laugh or be confused.  It’s difficult to know what a Regency woman would really think, but I believe she would be open-minded and enjoy what we came up with. After all, in Miss Austen’s words, for what do we live, but to make sport for our neighbors, and laugh at them in our turn?

The book title says A Collection of Pride and Prejudice-Inspired Short Stories. What do you mean by Pride and Prejudice-inspired?
Simply that we were inspired by Jane Austen’s creation. These aren’t retellings of Pride and Prejudice, but rather our own story ideas born out of the features from Austen’s classic, its characters, ideals or even a sentence. For Uniformed Integrity, I was asked by a friend to find a way to bring the social differences of the characters into the modern world and into my own neighborhood. I found this to be difficult, as I couldn’t see any major social differences in my own community. Well, that is until I went grocery shopping one Saturday morning.

How did shopping for groceries give you the idea for a Pride and Prejudice story?
My husband is in the military and so I do a good deal of my shopping on a military base. Generally I go early on a Saturday morning since there aren’t that many people and very few, if any, on-duty personnel. Those who are on duty get priority in the checkout line. On this particular day there were two people in uniform, one an NCO (that’s a non-commissioned officer) and the other a major. All three of us arrived at in the queue at the same time. The major was taken first because of his rank, then the NCO and then myself.  And I immediately thought this was the perfect way to demonstrate social ranking. Darcy would be a high-ranking officer and Elizabeth the dependent of an officer under Darcy. It also brought the story into my own community. Pemberley Air Force Base is modeled after my military installation.

How did you first discover Jane Austen?
Boredom actually. I was 11 years old and school was on holiday for the summer. All my playmates were off somewhere else and I was at a loss for something to do. So I went into my father’s library and found a book. It was Emma. I thought George Knightley was dashing and Frank Churchill was a creep and I loved every page. Of course I never let anyone know I read it; I was afraid that my parents might make me read something else. About a year later, I was again seeking to relieve my boredom and found another story on my father’s shelf by Jane Austen. This time it was Pride and Prejudice and my heart has belonged to Mr. Darcy ever since.

Do you have a favorite film adaptation? 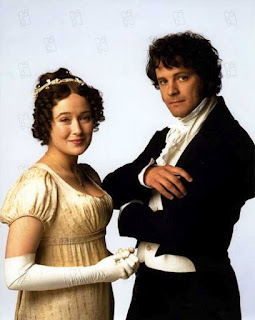 Of Pride and Prejudice? Yes. I love the 1995 BBC version with Colin Firth. I find it follows the book more closely and is well acted and produced. I do have all the versions on DVD though. I enjoy all of them.

There are a lot of Austen-inspired books out there. Do you read any of the other published works and, if you do, do you have a favorite?
There is quite a bit, isn’t there? And, yes, I do read some of the other published works. I can’t say that I’ve read all of them, but I have read a good number. I have quite a library actually. As for a favorite, that’s really hard. There are a few that I’ve read more than once. But if I had to choose, I could narrow it down to a Regency pick, a modern and an audio book.  I really like Pamela Aidan’s trilogy. Duty and Desire being the best, I think.  Trials of the Honorable F. Darcy by Sara Angelini for the modern. It’s a fun romp. And the audio version of Maya Slater’s Mr. Darcy’s Diary read by David Rintoul. Mr. Rintoul did nothing for me as the ’80s BBC Mr. Darcy, but his reading of this book is absolutely fabulous.

I understand you designed the book cover. Do you design many book covers?
I am a professional graphic designer, so in addition to Honor and Integrity, I also designed covers for my other books. I’ve done several textbooks and the cover of a book chronicling the first 100 years of my hometown as well as other covers for various other publications. I’ve done design work for magazines, newspapers, advertisements, signage, movie titles, CDs, DVDs, pretty much everything. Covers are one of my favorites though.

Will the three of you publish anything else together?
We've been discussing it. You may see one or two more ventures from us. You might see more works from us individually too.

Are you planning a giveaway for us here at My Jane Austen Book Club?
Definitely! Blog readers will have the chance to win an eBook copy of Honor and Integrity: A Collection of Pride and Prejudice-Inspired Short Stories by leaving a comment plus an email address! This giveaway contest is open internationally and will end on July 30, when the winner will be announced.


Thank you so much, Aimée, for being my guest and for granting the readers of My Jane Austen Book Club an e-book copy for the giveaway contest!
Posted by Maria Grazia at 23:49

OK, now I'm intrigued. I think I may have to get the audio book you recommended, too.

Thanks for the opportunity to win your book.

Congratulations to all of you on the publication of your book. I know June well, Enid pretty well, and you and I have crossed paths through JAFF. All the best. Mary

Thank you Gayle and Mary. We all love JA, a good passion to share.

Re social ranking - I noticed that the supermarket line went by rank, and not "ladies first." I suspect Caroline Bingley would be very offended. (heh!) Thanks for sharing this, Aimee.

ok, really want to read more!!!!
thank you for the giveaway!!

Gayle,
I hope you do get that audio book. I was skeptical when I saw it, but I have listened to 4 times since I bought it! He really does read well!

Mary,
Thank you! It's always good to see you, even if it is just on the Internet! :)

June,
LOL Military life isn't something Caroline Bingley could handle! They take on-duty personnel first because they are "on-duty" and therefore limited on time away from their station.

I love those words: honor and integrity! They are evocative. Great title. I would be delighted to win a copy. Thank you for opening the giveaway internationally.
cyrano123 (at) live (dot) fr

Thank you Catherine. Hope you had a great national day holiday.

Thanks Robin for tweeting about it. I don't use Twitter that much as I don't know what to talk about, but some authors stand by it.

Interesting! Congratulations to the trio! Thank you for the giveaway!
cherringtonmb at sbcglobal dot net

Thank you Becky and good luck!

We get multiple stories all in one, that is good news for us!

Great job on designing the cover, it looks great!

Thank you Danielle, Aimee is very talented, both in writing and designing.

Danielle, Enid and I are so spoiled by having Aimée do the artwork. She read our stories and made the cover design -- gold lace from my Regency PP fic, the time-travel device from the group tag-along, and Lizzy silhouettes from Regency, present-day, and future.

I like the short story approach because it's just enough to read in one sitting. When I read a long story or novel, sometimes I can't stop reading and stay up all night, which is bad for my sleep schedule and health!

Love short stories! Thanks for the giveaway!

Yes, you caught my attention. I am curious to read your short stories.
Please enter me for the giveaway.

I like short stories as it is easy to digest. Also love the interview as it gives me a chance to know more about you, Aimee.

Thanks for the giveaway, too.

Thank you Luthien. Short stories are like chocolate beans, handy and yummy.

This sounds like a good read. Tbanks for the giveaway.
marlenebreakfield(at)yahoo(dot)com

Thank you Marlene and good luck!