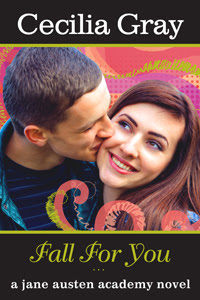 Cecilia Gray is the author of a new YA series, The Jane Austen Academy:

The last thing that the girls at the elite Jane Austen Academy need is hot guys to flirt with. But over the summer the school has been sold, and like it or not, the guys are coming. And it’s about to turn the Academy—and the lives of its students—totally upside down…

Enjoy her post, Austen versus updated and leave your comment  to get a chance to win an e-book version of the first novel in the series, Fall for You, A Modern Retelling of Pride and Prejudice (the winner will choose either mobi (Kindle), epub (Nook/iPad) or PDF format) . Don't forget to add your e-mail address to be contacted in case you win. This giveaway contest ends on July 30.

************************
Oh, to have grown up in Jane Austen’s times.There was so much to worry about. So much repressed angst. So many reasons to storm away,fist to mouth, with repressed emotion.
A few hundred years has done nothing to lessen the drama.
Developing The Jane Austen Academy series meant updating all the major plot points and themes so they’d retain their Austenesque essence but feel fresh and relevant to my characters. It meant keeping the Austen Dilemma with a modern twist.

Now, now, I can hear the protests already. Yes, Jane Austen is timeless. I absolutely agree. But laws and social decorum are not – so here we go – Austen style themes and their updated counterparts in The Jane Austen Academy series.
Greed…is not so good
AUSTEN STYLE
In Austen’s novels, people do bad things for money and status. Wickham seduces a young, naïve girlfor her fortune. Mr. Elliot tries to marry his cousin (not gross back then, apparently) to ensure his title.
Austen’s heroines are often financially squeezed and given opportunities to fix their problem by compromising their morals. If only Elizabeth Bennet would marry a man she didn’t love. Problem solved! Only she can’t…she won’t…and we love her for it.
UPDATED STYLE
In The Jane Austen Academy, the villains are still motivated by money and status. The resident bad boy, Josh Wickham, is a hollywood teen idol whose hunger for fame and fortune puts him on the wrong side of our Academy heroines more often than not. Granted, nobody has to marry a cousin, but there are plenty of other ways he uses and abuses his friends.
My heroines are also squeezed. In FALL FOR YOU, Lizzie is tested by competition for her scholarship to Georgetown and in SO INTO YOU, Ellie loses her tuition. Fixing these problems just might mean compromising their ethics. Do my characters stay as squeaky clean as Austen’s? Ehhh….not quite…

A life of leisure…and lameness
AUSTEN STYLE
Austen’s heroines can’t inherit, can’t hold jobs, and ergo can’t be responsible for taking care of themselves. The Dashwood sisters must live in gentile poverty after the death of their father demands his estate pass to a male heir…even though he’s a total douchebag. The Bennet sisters will be in a similar situation once their father dies, which is why their mom goes into matchmaking overload.
UPDATED STYLE
Luckily all I had to do was make my heroines teens to achieve a similar effect. Being a teen feels notoriously helpless because your parents, your teachers, and the adults in your life make all the rules – none of which make sense.
To make matters worse, my heroines have no control over the changes to their Academy after the new owners take charge. Since the new owner won’t reveal his/her identity, they can’t appeal the changes or even express their frusturations.

Smarts. Get some.
AUSTEN STYLE
Austen had an agenda,a not-so-secret underlying message of her novels : smart people read. Henry and Mr. Darcy both make mention of how being well-read is a desirable trait in a woman. Implication: reading is the best way to become a better, smarter person.
UPDATED STYLE
Jane Austen Academy students are smart. In fact, they are so smart, I worry that I’m not smart enough to write them. Lizzie is clever, Ellie is a mathematical genius, and Emma is notoriously good at reading people and getting them to do what she wants.Smart people rule. Enough said!

One more advantage ofupdating Jane Austen? KISSING. While Jane Austen declined to give her readers the liplock payoff, I have no such lines drawn in The Jane Austen Academy series. I hope you enjoy!

The Book: Fall For You

To say Lizzie and Dante are polar opposites is the understatement of the century. He’s a snooty Exeter transfer with more money than Google. She’s a driven study-a-holic barely keeping up with tuition. It’s obvious that Dante thinks he’s way too good for Lizzie. And Lizzie knows Dante is a snob with a gift for pushing her buttons.
But things are changing fast this year at the Academy. And when Lizzie’s quest to stop those changes blows up in her face, taking her oldest friendship with it, she has nowhere else to turn but to Dante, with his killer blue eyes, his crazy-sexy smile, and his secrets… Secrets Lizzie can’t seem to leave alone, no matter how hard she tries…

Cecilia Gray lives in Oakland where she reads, writes and breaks for food. She also pens her biographies in the third person. Like this. As if to trick you into thinking someone else wrote it because she is important. Alas, this is not the case.
Cecilia has been praised for “instilling a warmth and weight into her characters”  (Romancing The Book Reviews) and her books have been praised for being “well-written, original, realistic and witty” (Quills & Zebras Reviews).
Several of her titles - including A Delightful Arrangement (The Gentlemen Next Door #1) and An Illicit Engagement (The Gentlemen Next Door #2) - have spent, in her view, a shocking amount of time on bestseller lists for romance, historical romance and regency romance in the US, UK, Italy and Spain.
Her latest release, FALL FOR YOU, the first in a series of young-adult contemporary Jane Austen retellings received a starred Kirkus review and was praised for being a “unique twist on a classic” and offering “a compelling action of action, drama and love.”
She’s rather enamored of being contacted by readers and hopes you’ll oblige.

More about  Cecilia Gray and The Jane Austen Academy at

This would make a great addition to my kindle (and my reading library) What a fun new twist! Thank you for the giveaway.
cherringtonmb at sbcglobal dot net

Adding a link to this on the Friday Promotions post on my blog!

This sounds like a good addition to the modern Jane Austen retellings. Thanks for the post and for the giveaway opportunity.

Sounds interesting, hope the few YA versions of JAFF get more people interested in JA at a younger age.

I´m looking forward to reading this series. I loved the trailer! Made me really interested into reading all of the books!

the series sound very interesting, and ofcourse starting it with P&P retelling is perfect and then maybe persuasion retelling?

Intriguing! My family will shoot me for starting a new author! OH WELL!!!!! :D

P&P for YA sounds like it will be my cup of tea. Looking forward to read it.

I've got my granddaughter to read a couple of the YA novels revolving around Sense and Sensibility and Persuasion. I hope to encourage her to do more so I read them first and then we discuss. I'd love to try these as well.
schafsue at gmail dot com