Yes, she is remembered as one of the most important writers in all of literature, defined for generations what it means to be in love and have a successful relationship, and inspired countless writers and genres. That is all fine and very good, but that is now… for us.

For Miss Austen’s reality, she died young (only 41) in a cottage in a small village where she was living with her sister and mother and her books were published anonymously. Sadly, it is hard for us to even know her that well, with the destruction of many of his letters and writings by her sister. After that, we have to rely on a biography written by her nephew that seems more concerned with the family’s name as compared to the truth of this great person.  She joins Shakespeare in our mystery-lost genius category, the ones we only have our hopes and dreams to point to for truth.

This harsh and very cruel choice of the fates is what inspired a good part of A JANE AUSTEN DAYDREAM, my new novel. And honestly, writing this book terrified me for many years. See, I knew from the start I wanted to give Jane an adventure and a love story much like her own characters experienced, but taking that idea to the next step was where it became tricky.

A JANE AUSTEN DAYDREAM is not historical fiction, and while I did research into her life for the writing (including a visit to stops in England), I wanted her own stories, her own characters to dictate the true course of the adventure. As I say in the title it is a daydream, and for the pure Janeites out there, they will see enough hints right from the first chapter that this is a very different work all together.

I’ve been known to call A JANE AUSTEN DAYDREAM a treasure hunt, since it is filled with fun references and quotes from her own stories, but I also made sure that in the end it is a book for all levels of readers, from the Janeites to the newcomers just now discovering her great work. For seven years, I worked on and off this book, covering two different sets of paperbacks of her novels with highlighters and sticky notes.

In the end, the hardest obstacle in the creation was… well… finding Jane. Again, I blame the fates.

Her letters were a wonderful starting point, but after that I had to turn to her own characters for inspiration. The more I thought about her and read her books again and again,luckily she became to emerge for me; much like seeing someone walking towards you on a foggy morning.

I began to see someone very passionate, headstrong, confident in her ability, and with a dangerous wit. Yes, she could get in trouble from time to time for it, especially in the early parts of the book.  This is a Jane that shares traits with Emma (and her assurance that she knows how to handle all of the affairs of the heart), Elizabeth Bennet (smart and very funny), and Anne Elliot (reflective).

So did I succeed in discovering Jane and fixing a mistake of the fates?

I have to leave it to the readers to decide. For me, I am proud of A JANE AUSTEN DAYDREAM and the surprising twists and turns in it (including one brand new literary invention I won’t ruin here). It is something very new, and I like to imagine that maybe… just maybe… it would have made Miss Austen laugh. 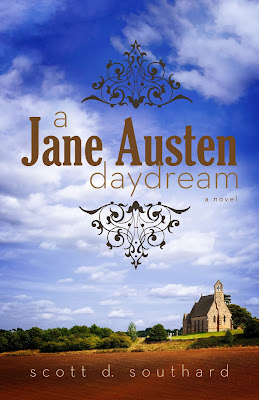 Below is an exclusive excerpt from A JANE AUSTEN DAYDREAM by Scott D. Southard. It is Chapter II of Volume I.

A JANE AUSTEN DAYDREAM is published by Madison Street Publishing and can be found in print and eBook formats. As an ebook it is available for Amazon , Kobo , and Barnes and Noble’s Nook   for only $3.99.

Chapter II from Volume I

Scott D. Southard is the author of A JANE AUSTEN DAYDREAM, MAXIMILIAN STANDFORTH AND THE CASE OF THE DANGEROUS DARE, MY PROBLEM WITH DOORS, and MEGAN. Scott received his Master's degree in writing from the University of Southern California. More of his writing can be found at his writing blog, The Musings and Artful Blunders of Scott D. Southard at sdsouthard.com. He is also the book reviewer for WKAR’s radio show Current State.
Posted by Maria Grazia at 21:25

Great interview, and I really enjoyed the sneak peek of that chapter - has my interest piqued, for sure!

always interesting to have a man's view on Jane

You've given her Mrs Bennet for her mother! I do wonder why at least Henry cannot attend - visit his brother, see his brother's estate, make friends of other gentlemen - but I suppose it isn't important for him to meet potential brides yet.

One day, I hope you write a post about whether you write differently for male and female readers. Just curious!

Let's see... to be honest, I really don't consider the gender of my audience when writing. I usually just focus on the story that needs to be told and what is best for it. Jane is very much the main characters and you see everything through her eyes.

I hope you will consider reading the rest of the book. I'm really proud of it and there are some really unique twists and turns in it.