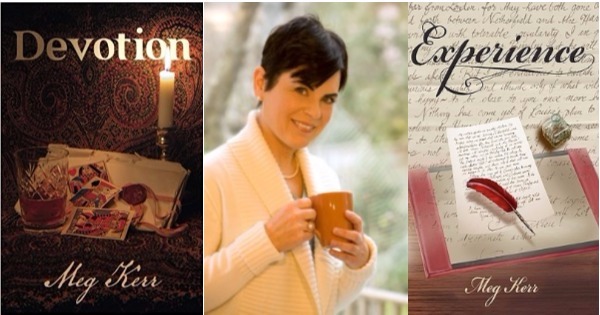 
DEVOTION IS OFFICIALLY OUT 18 AUGUST!


MY INTERVIEW WITH AUTHOR MEG KERR

Hello and welcome to our online book club, Meg.  My first question is, do you remember your first encounter with Austen and her work? What was it like?

Thank you for inviting me. I love thinking and talking about Jane Austen’s work!

I was about twelve when I first read Pride and Prejudice. I can’t remember now exactly what impression it made on me, but it must have been a significant one, because I have re-read P&P many many times since then. And every single time I’ve read it, it’s been a different novel—sometimes a little different, sometimes a lot different. I had read it several times but was still a teen when I finished it and first wondered whether Elizabeth really loved Darcy when she accepted him. (I loved Darcy of course! Nothing to wonder about there!)

Good! Second question is about Pride and Prejudice.  What is it that you especially like in it and why did you decide it needed to have a sequel, Experience, and a companion sequel, Devotion?

Does anyone read Pride and Prejudice and not become a member of the Bennet family? Jane Austen draws her characters so clearly and fully that you feel as though you know them as well as your know your own friends and sisters, relatives and neighbours. Maybe better—your best friend might surprise you by what she does, but not Elizabeth and Jane Bennet.
Then you close the book, and it’s like your family has moved away and forgotten to write to you. Where are their letters? Why aren’t they keeping in touch and letting you know everything that is happening?
So Experience and Devotion are a big packet of news that took a long time to be delivered.

And now, Mr Darcy! Is he your favourite Austen hero? What is he like in your novels?

I had to look into my heart to answer this question.... I’m very fond of Captain Wentworth from Persuasion...but no, Darcy still reigns supreme.
In my novels he is Darcy as Jane Austen wrote him. What right do I have to tamper with perfection? Others may change but Darcy and Elizabeth as we last saw them in P&P are eternal.

Darcy is the perfect romantic hero, but his antagonist, George Wickham is also an interesting character with his own charms. What was it like to rewrite his story?

I didn’t rewrite Wickham’s story; I continued it in accordance with Jane Austen’s notes on his and Lydia’s relationship (in Experience); and I concluded it (in Devotion). He was a soldier at the time of the Napoleonic Wars. Just two and a half years after the end of Pride and Prejudice, in June 1815, the Battle of Waterloo was fought....
I find George Wickham interesting and attractive in the same way that Elizabeth Bennet did. Unlike Darcy, his spell does not last!

What is it with Austen bad boys? Wickham, Willoughby, Frank Churchill. Aren’t they as unforgettable as Austen heroes?

Well, let's add John Thorpe  and Mr Elliot too,  then! 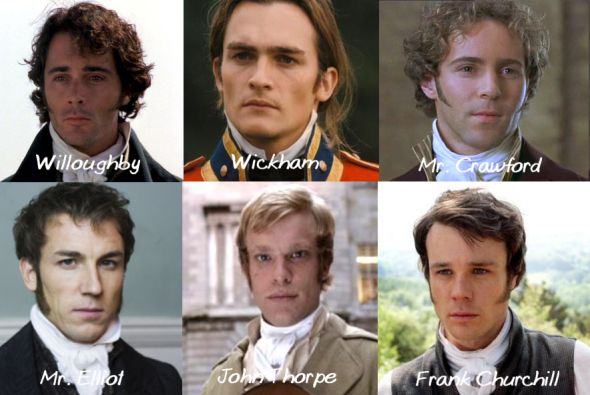 Jane Austen’s relationship with her bad boys is at least as fascinating as the bad boys themselves. She definitely felt a powerful attraction for them and (probably with the exception of Wickham) she wanted to believe that they could be redeemed. But she never redeemed any of them more than partially, or for a brief time. I think they are so unforgettable because we feel them through Austen’s own strong and conflicted feelings.
And I had to follow in Austen’s footsteps to see where they would lead me. I had to get entangled with a bad boy myself. In Devotion readers are introduced to John Amaury.

Did you change anything in the Georgiana/Wickham story line in Devotion?

No; Georgiana and Wickham never meet again. But that does not stop them from having a potent influence on each other that is the initial driving force of Devotion.

What I did change was our window on Georgiana. In Pride and Prejudice we see her only through the eyes of other characters (Darcy, Caroline Bingley and Mrs. Hurst, Elizabeth Bennet—“interested people” as Jane Bennet would say, who have perhaps misrepresented her to us)...until the very end when Austen shows us Georgiana directly, first telling us about the letter she writes to Elizabeth on her engagement (“Four sides of paper were insufficient to contain all her delight, and all her earnest desire of being loved by her sister.”), and then about their relationship as sisters-in-law: “They were able to love each other even as well as they intended. Georgiana had the highest opinion in the world of Elizabeth[.]”


For a long time I have thought that Darcy’s description of Georgiana’s feelings for Wickham says a great deal more about the attitude of an older brother towards the sexual awakening of his little sister than about any thoughts Austen herself had on the subject. (Darcy wrote to Elizabeth, “[Wickham] so far recommended himself to Georgiana, whose affectionate heart retained a strong impression of his kindness to her as a child, that she was persuaded to believe herself in love, and to consent to an elopement. She was then but fifteen, which must be her excuse[.]”) I know what it’s like to be a fifteen-year-old in love! So do most women. And certainly Austen knew what it was like to be a sixteen-year-old in love; her amazing and naturalistic portrait of Marianne in Sense and Sensibility shows a young girl who is exalted by her first love and then crushed nearly to death by its loss. “Affectionate heart”? I don’t think that hits the mark.
The Georgiana in Experience and then in Devotion is no little girl playing with dollies.

You’ve also given more space to secondary and minor characters like Caroline Bingley  or Pen Harrington. What about them in Devotion?

How can you call Caroline Bingley a minor character? She’s the wicked witch who keeps the P&P plot boiling! But I will admit that Pen Harrington is a very minor character.
In Experience I treated Caroline Bingley like one of the Bennet daughters—I followed her equally. She’s a mean girl who got her comeuppance; but then what did she do? I wanted to know. She was mean, but she was interesting. Think how dull those several days at Netherfield would have been without her and Mrs. Hurst making snide remarks!
As for Pen, I didn’t want to leave Meryton behind while Mr. and Mrs. Bennet were still resident there. In P&P we only saw Pen and her sister Harriet out of the corner of our eye, so to speak, but when we look full on, she’s worth getting to know, as are the new family who come to live in Netherfield Hall...and their noble guest....

Which was the character you had more fun writing? Which was,  instead,  the most complicated one?

When it comes to fun, Mr. Collins is always my Number One character—especially now that I know what he’s doing in his study when he’s supposed to be writing sermons. Letters to Darcy! Two-volume novels! Epic poetry! However I completely understand Charlotte Collins’ wish to keep him engaged in healthful exercise outdoors, and, when indoors, confined to his study.
The most complicated character to write was John Amaury, who is both very attractive and very bad. His charisma and immorality have to stay in balance.

Is there a third P&P related book in the making? Will this become a trilogy?

Yes there is a third (and final) novel, Camden-place. It’s a Bath novel. I knew I would have to go there, probably for the same reason that Austen does—people from all over mix in Bath.
Camden-place is still in the pre-writing stage.

Looking forward to reading Camden-place too! Thanks for being my guest, Meg. 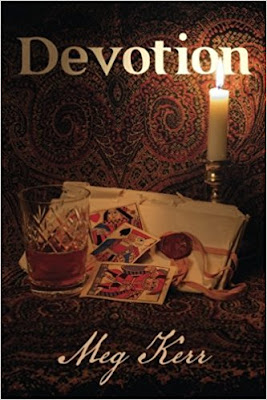 Georgiana Darcy at the age of fifteen had no equal for beauty, elegance and accomplishments, practised her music very constantly, and created beautiful little designs for tables. She also made secret plans to elope with the charming and dissolute George Wickham. Will the real Georgiana Darcy please stand up? In Devotion, Georgiana, now twenty years of age and completely lovely, does just that. Taking centre stage in this sequel to Experience that sweeps the reader back into the world of Pride and Prejudice, she is prepared to shape her own destiny in a manner that perplexes and horrifies not only the Darcy-de Bourgh connexion but the whole of fashionable London. The arrival of a long-delayed letter, and a clandestine journey, bring Georgiana and her fortune into the arms of an utterly wicked young man whose attentions promise her ruin. At the same time, events in Meryton are creating much-needed occupation for Mrs. Bennet and an amorous quandary for Lydia Bennet’s girlhood companion Pen Harrington; and the former Caroline Bingley is given—perhaps—an opportunity to re-make some of her disastrous romantic choices. Meg Kerr writing effortlessly and wittily in the style of Jane Austen gives Pride and Prejudice fans the opportunity to visit the year 1816 to re-unite with favourite characters, and meet some intriguing new ones.

What do you do when you live in the twenty-first century but a piece of your heart lies in the early nineteenth? If you are author Meg Kerr you let your head and hand follow your heart. With her love of country life—dogs and horses, long walks in the woods and fields, dining with family and neighbours and dancing with friends, reading and writing and the best conversation—and her familiarity with eighteenth and nineteenth century history and literature, Meg has a natural gift to inhabit, explore and reimagine the world that Jane Austen both dwelt in and created, and to draw readers there with her.

GREAT NEWS! From  July 15-19th Devotion will be FREE to download from Amazon Kindle in celebration of Jane Austen's 200th anniversary!
Posted by Maria Grazia at 10:07