Hello and happy Sunday, everyone! I'm back from my summer visit to old England, which I consider my second home, and I'm happy to be back blogging featuring a great new release by Victoria Kincaid. Here's her kind message introducing an excerpt from the book she especially granted us:

Hello, Maria Grazia, and thank you for having me as a guest!  The plot behind The Unforgettable Mr. Darcy has been germinating in my mind for a long time, and I’m so pleased to finally be able to share it with readers!  Below is an excerpt about Elizabeth’s experience after she awakens and is learning to cope with the amnesia. I hope your readers enjoy it!


It was part of a long list of things she did not know.  “Upon my word,” she exclaimed to the empty room, “I would not even recognize my own countenance!”
Suddenly it was very important to know her own appearance.  Her hair was a dark mahogany, and her hands appeared young—unlined and unspotted—but she knew little else.  Was she pretty?  Was she tall?  What was her age?  A mirror hung on the far wall, but Elizabeth’s position in the bed did not allow her to see it.
Climbing from the bed would not be condoned by doctor or husband, but neither was present.  Hmm….apparently I do not bow easily to the will of others.  Good for me.
If she were to make the effort, it would be best to do so now while she was still alone in the room.  Sitting up provoked a wave of dizziness; Elizabeth paused for a moment to allow the room to stop spinning around her.  Feeling steadier, she slid to the edge of the bed and dangled her legs over the side.  They did not reach the floor.  Perhaps that answers my question about my height.  Fortunately, the dizziness remained at bay despite her movements.
Slowly, she slid off the bed, gingerly resting her weight on her feet.  Her knees immediately buckled, compelling her to grab the edge of the bed.  The next few minutes were occupied with steadying herself.
Holding the bed with one hand, she took a step and then another, pleased that she remained upright.  Reaching the end of the bed, she was at the point where she needed to place all her trust in her legs.  She took a minute to ensure her balance and then released her grip on the carved wooden bedpost, holding her breath as she stepped into the middle of the room.
Her body wobbled a bit, but she did not fall.  She took another quick step, which brought her to the mirror. Steadying herself with a hand against the wall, she stared into it with rapt fascination.
The face that stared back at her might have been pretty were it not so pale and gaunt.  Dark circles shadowed Elizabeth’s eyes, and her cheeks had hollowed out.  How long was I sick?  I might have been raised from the dead!
At least her hair was dark and thick, curling around her face.  And her eyes were bright, a startling green.  I have a few good features despite my complete want of complexion.  Under the linen nightrail, her frame was slender to the point of being thin.  I resemble a plague victim.  What if my countenance never recovers?  Her stomach clenched.  Would William put me aside if I am never in good looks again?
Without any warning, the room dimmed, her legs collapsed, and Elizabeth sank to the floor.  I am fainting.  How odd, I have never fainted before.  Actually, how would I know?  This is so frustrating…
The world went black, but briefly.  After only a few seconds, she recovered consciousness.  Her arms had broken her fall, but her legs were awkwardly twisted underneath her.
She did not try to arise immediately but remained on the floor, panting while her heart rate returned to normal.  I should call for help, but they will only chastise me for leaving my bed.
Evidently I also am stubborn. 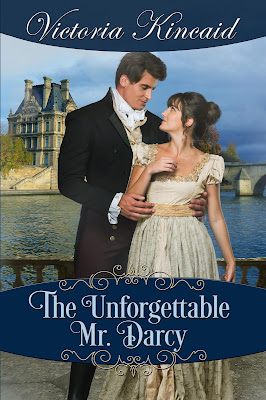 The Unforgettable Mr Darcy - A Pride and Prejudice Variation

Mr. Darcy arrives at Longbourn, intending to correct the mistakes he made during his disastrous proposal in Hunsford.  To his horror, he learns that Elizabeth Bennet was killed in a ship’s explosion off the coast of France—in an apparent act of sabotage.  Deep in despair, he travels in disguise to wartime France to seek out the spy responsible for her death.

But a surprise awaits Darcy in the French town of Saint-Malo: Elizabeth is alive!
Recovering from a blow to the head, Elizabeth has no memory of her previous life, and a series of mistakes lead her to believe that Darcy is her husband.  However, they have even bigger problems.  As they travel through a hostile country, the saboteur mobilizes Napoleon’s network of spies to capture them and prevent them from returning home.  Elizabeth slowly regains her memories, but they often leave her more confused.

Darcy will do anything to help Elizabeth reach England safely, but what will she think of him when she learns the truth of their relationship?

a Rafflecopter giveaway
Posted by Maria Grazia at 12:36

Seems I share a trait with Elizabeth, I have been told that I am also stubborn, though I don't believe it

Loved the excerpt and how Elizabeth was discovering things about herself such as her stubbornness.

I too am a work in progress. Stubborness... the struggle is real. Thanks for the chance to win! I saw this post in the Sunday, Aug. 05, 2018 edition of The BookTube Your Shelf Daily Reader.

I love this scene and Elizabeth's internal monologues as she discovers things about herself. Sometimes it's poignant, sometimes it's funny but always entertaining. Just like the rest of the book.

Thanks for sharing this excerpt! Amnesia must be such an awful experience.
I’ve never seen a variation take place in France!

Great excerpt! Poor Elizabeth has a long road ahead of her, it appears. I’m sure Mr. Darcy will see that she has the best of care. ;-)

This story sounds jolly good, how thrilling to rediscover yourself & that dashing Mr Darcy :D

Personal monologues are entertaining and enlightening when done well. This author uses the technique in a masterful way, enabling you to connect more deeply with her characters. Looking forward to reading this book.

Lovely excerpt - how stressful it is to be unaware not only of one's identity but physical and internal characteristics as well. I can't wait to read this story!

I love all Victoria's books. This is a must read. Wonderful excerpt

I hope this book is released soon on Audible. I just finished listening to "The Secrets of Darcy and Elizabeth" and I truly loved it.

Poor Elizabeth! I hope she gets all of her memory back. I can't imagine what it must be like not even knowing what oneself looks like.

Another terrific excerpt, Victoria! This time it is from Elizabeth's viewpoint when she is alone in her room. I hope she safely gets back to her bed without getting some help from Darcy or the doctor.

I read and loved this story and plan to reread it.

Oh how exciting this story seems really good, loved the excerpt and have to know what happens next!

Thanks for the informative article. This is one of the best resources I have found in quite some time. Nicely written and great info. I really cannot thank you enough for sharing.

Your site is amazing and your blogs are informative and knlowledgeble to my websites.This is one of the best tips in my life.I have in quite some time.Nicely written and great info.Thanks to share the more informations.