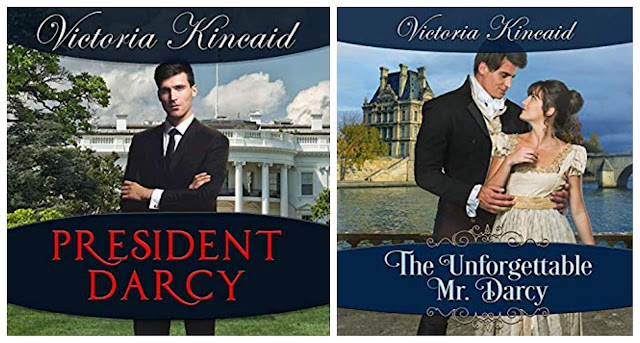 I've received this lovely message from author Victoria Kincaid and I'm glad to share it with you. Read the excerpt and take your chances to win 1 of 2 free audiobooks she is offering to the readers of My Jane Austen Book Club. Enjoy reading and good luck!
M.G.

I hope you enjoy the excerpt from President Darcy below:

Elizabeth watched President Darcy’s retreating back.  On the bright side, he didn’t seem inclined to have her arrested, but he had taken off like she had the plague.  His contempt for her was so glaring that she practically needed sunglasses.  What had she done to deserve that?
Besides venturing into a restricted area, hiding in his closet, and nearly giving him a heart attack.  Oh, yeah.  Oops.
What she wouldn’t do for a time machine.  Or failing that, a complete memory wipe of the past half hour.  Since no amnesia was forthcoming, Elizabeth turned to face Mr. Bingley.  No doubt her cheeks were bright red, and her hair was a dusty mess.  Nevertheless, he gave her a reassuring smile.  “Will you join us at the dinner, Ms. Bennet?”  The chief of staff had a reputation for being far more affable than the president, and Elizabeth could see why.
“Um…sure…”  It was as if she were caught in the White House version of good cop, bad cop.
He continued to smile pleasantly as he gestured for her to precede him down the hallway.  As she hurried toward the East Room, Elizabeth wondered if anyone would see them emerge from the hidden door.  Or would the president tell his friends about her mishap and laugh?  She swallowed hard.  What could she possibly say to her family?
Dad, I consider it an honor to be smirked at by the president.  Most Americans couldn’t claim that distinction. Mom, someday it will be an amusing anecdote to tell my children about the time the President of the United States thought I was an idiot.
That would not go over well.
I wasn’t expecting to see the freaking President of the United States, so forgive me if I use words like “thingy” and can’t remember the name of the East Room. That infuriatingly superior grin had grown­ wider with her every mistake and fumble.  The bastard had enjoyed her consternation.
He had been chivalrous enough to help her exit the closet with some grace, but then he had wiped his hands clean of her germs.  And what man under sixty carried a handkerchief in this day and age?
“Will the president report me?” she asked Bingley as they neared the East Room door.  It would be a terrible blow to her family. And Elizabeth had worried that Lydia would embarrass them!
“No,” Bingley said immediately.  Then after a moment, he said, “I don’t think so.”  How reassuring.
By the time Bingley and Elizabeth emerged through the concealed door, the president had disappeared into the crowd.  That’s good.  Maybe I can avoid him for the rest of the evening—and the rest of my life.
However, Elizabeth’s hopes were quickly dashed.  The moment she became visible, her mother marched up to her, grabbing her by the wrist and dragging her away.  “Where have you been?”  she whispered harshly.  “Walter is introducing us to the president!”
President Darcy’s eyes, cool and assessing, perused her as she joined the semicircle of her family arrayed before him.  Ugh.  Elizabeth did not have any interest in another encounter with the man.   On the bright side, at least he’s not out searching for the Secret Service to have me arrested.
As Elizabeth and her mother slipped in next to John Bennet, everybody stared; Lydia smirked, no doubt pleased by her timely escape from the hallway. The president gave her father a superior smile.  “Do you often misplace your daughter?”
As if she were a wallet or a puppy.  Could he be more condescending?
Her mother curtsied—curtsied!—and said: “We’re so sorry to keep you waiting, your highness.”   This was followed by a violent coughing fit from Bing and a disdainful look from President Darcy.
VICTORIA KINCAID

a Rafflecopter giveaway
Posted by Maria Grazia at 15:10

Thank you for the chance

I loved these books and would love to win an audiobook. Thank you for the giveaway.

I am so happy these titles have been released on audio and would love to listen to them. Thanks for the giveaway!

I enjoyed reading the unforgettable Mr. Darcy, and I’m looking forward to reading the other book. Thanks for the chance to win a copy.

Funny excerpt. Thank you d=for sharing and the chance to win a copy.

You should try out smashy city mod for your android phone.

I Love your article. You cant visit my website : mangafox app for android