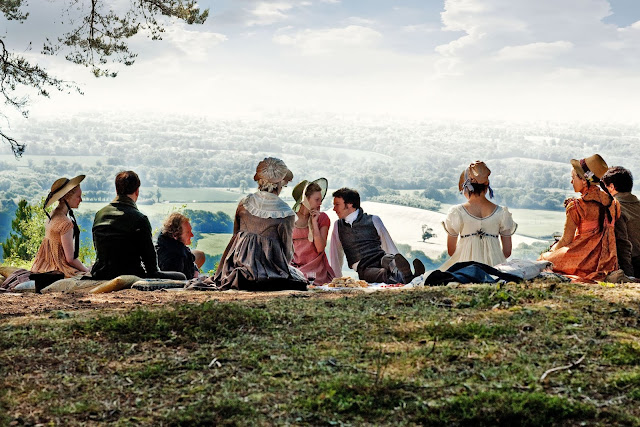 
By Jayne Bamber, author of the Friends & Relations Series

In all the facets of Jane Austen’s genius, perhaps the most delightful is the reality she imbues in all her characters. No one is quite perfect, making them all the more relatable. We can easily imagine ourselves as one or other of her heroines, not because they are as perfect as we might wish to be, but because they, like us, are not. Elizabeth Bennet, the paragon every Janeites wishes to be, is prejudiced and faulty in her judgement. Anne Eliot is too easily persuaded, and Fanny Price rather a bore and a prude. Each of the Dashwood sisters lacks one of the titular traits, while experiencing rather too much of the other, and Catherine Morland literally accuses her future father-in-law of murder (yikes.)

The star of Emma, Emma Woodhouse herself, is arguably the most flawed of all of Austen’s heroines – Jane Austen herself wrote that Emma is “a heroine whom no one but myself will much like.” I will fully admit, I was never much fond of her until a couple of years ago, when Romola Garai’s absolutely stellar portrayal of Emma Woodhouse made me fall in love with Emma for all her faults.

In laying out my plans for Book 2 of the Friends & Relations series, I knew that I wanted Emma to play a large role in the story, and from that notion, I embraced the notion of several flawed heroines, even to the point of blurring the lines between heroine and villainess. 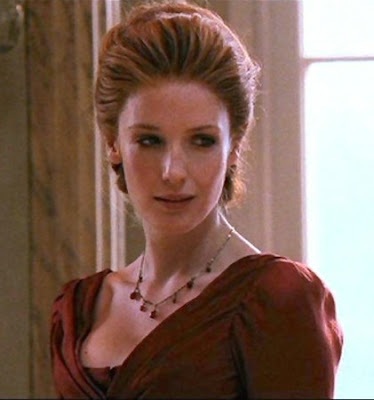 Caroline, a traditionally despicable and almost universally loathed character, is portrayed in great depth, exposing the motivation that lies behind her actions, and we see her struggling with a sense of questioning whether her social aspirations are really worth all the deceit and maneuvering; she is brought to the precipice of questioning the very nature of the social structure she wishes to ascend several times over, and hesitates to abandon what has been her life’s work, even though she becomes increasingly jaded by the way the world she lives in works.

Lady Rebecca, an original character of my invention, was lauded by fans in Book 1, and despite her being so beloved, I decided to reveal some imperfections in her character in the second book. Her disdain of sentimentality comes to the forefront of the story, and her previously infallible judgment is rather less so in this volume. She is forced to face some personal demons she has been hiding from for years, and it’s not going to be pretty.

Georgiana, Lydia, and Mary play lesser roles in Book Two, Unexpected Friends & Relations, but emerge as just as dynamic and flawed as the principal characters, in much the same way as we are accustomed to seeing them. Mary struggles with matters of morality now more than ever, as Lizzy’s marriage to Mr. Darcy has thrust her into a higher echelon of society than she has ever been accustomed to, and with that comes exposure to some pretty awful people. Lydia is struggling to make that same adjustment, but of course in a much different way – Mary may be over-thinking everything, but Lydia is doing just the opposite, leading to lessons hard learned over the course of the novel. And poor Georgiana! Even after the events of Ramsgate, her judgement is not much improved – she’s been through so much, and knows that a lot of it is all her own doing, but she can’t seem to catch a break, even with such a large family all trying to protect her – even, at times, because of her family trying to protect her. 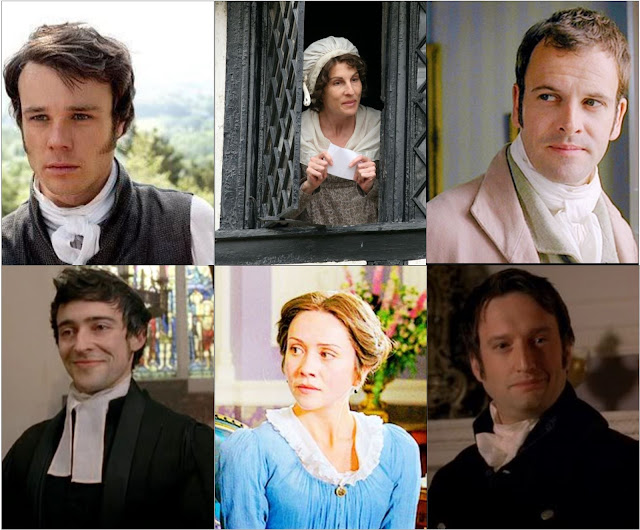 Emma’s flaws are perhaps portrayed a little differently, as I have changed one detail of her history leading up to her entrance into the story. She remains much the same in terms of her sense of superiority and general clueless (ha!) entitlement, but this fault seems diminished in comparison to the flaws of those around her in this re-telling – all the principal residents of Highbury are so flawed themselves, from Miss Bates’s tedious chatter to Jane Fairfax’s irritating reserve, Mr. Elton’s smarmy flirtations, and Mr. Knightley’s over-principled disapproval – really the worst Emma can be accused of is inadvertently making Jane Fairfax very uncomfortable indeed. 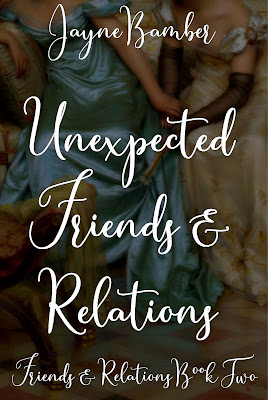 Unexpected Friends & Relations is available for pre-order on Amazon now – and below is an excerpt of what we can expect from Emma and Lady Rebecca in the story, being united after John Knightley has taken up residence in Hartfield:

Thanks for joining me on the first stop of my blog tour! I have started a give-away, and will be selecting a winner after each post on the blog tour! See the full schedule for the blog tour below, and click here[hyperlink to facebook] to follow me on Facebook for updates on the final installment of the Friends & Relations  Series, coming soon! 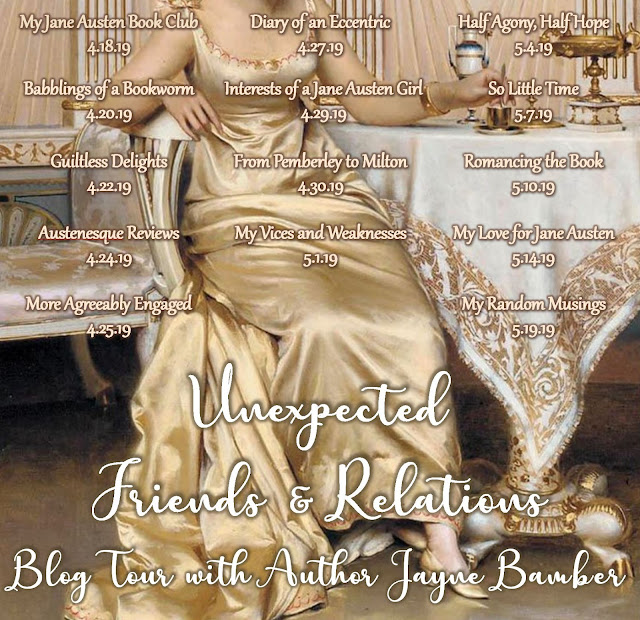 GIVEAWAY
Posted by Maria Grazia at 08:11

I think I must be Mary Bennet because I am told I also over-think everything,

This has me so curious after reading the explanation about the variation and the characters.

Totally loved the excerpt. Sounds so good. Would love to read this one!

Enjoyed the excerpt and would love to win a copy of this book. Thanks for the chance.

Thanks for giving us so much information to look forward to! And thanks also for the giveaway.

Just finished "Happier in Her Friends Than Relations" for the 2nd time and loved it!!!! Really looking forward to this new one. Your writing is absolutely worthy of the term "Austenesque" and I love the way you have involved so many of her characters. Thank you for such entertaining creativity.

I !oved the first book and I'm excited about the release. Congratulations and thanks for the giveaway.

I liked reading this post. Thanks for sharing that delightful excerpt with us! I’m looking forward to the book.

Academic writing is clear, concise, focussed, structured and backed up by evidence. Its purpose is to aid the reader’s understanding.
It has a formal tone and style, but it is not complex and does not require the use of long sentences and complicated vocabulary.
Each subject discipline will have certain writing conventions, vocabulary and types of discourse that you will become familiar with over the course of your degree. However, there are some general characteristics of academic writing that are relevant across all disciplines.
Read more about academic writing at https://writingcollegeessays.org