KAREN M. COX, "UNDECEIVED: PRIDE AND PREJUDICE IN THE SPY GAME" GETS A SECOND EDITION

Hi everyone! Thank you, Maria Grazia, for hosting me today to help spread the word about my re-release of Undeceived: Pride and Prejudice in the Spy Game. It’s the story of a unique Elizabeth and Darcy, CIA officers in the last years of the Cold War. He’s arrogant and standoffish—and heroic and handsome, of course. She’s bright and sparkling and naïve at the beginning, and learns from her mistakes with the grace we’ve come to expect from Elizabeth Bennet.
Undeceived is available now for preorder on various ebook platforms and will be 0.99 cents for the first 30 days after release (until 8/22/19.) The print version is in the works and will follow shortly after the ebook release.


Part of the story takes place in Hungary—in Budapest, and around Lake Balaton. Sadly, I’ve never had the pleasure of visiting Hungary, but while writing Undeceived I spent some time studying and learning about it. Part of that research led to this playlist of Hungarian music, which I thought I’d share with you today. 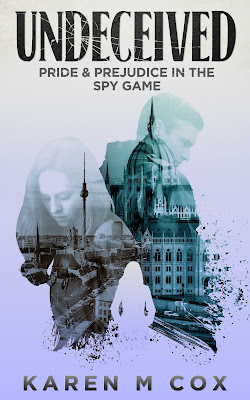 
Pride & Prejudice in the Spy Game
By
Karen M Cox

Available at Kindle, Kobo, B&N, Apple and other ebook platforms

...if I endeavor to undeceive people as to the rest of his conduct, who will believe me?

Elizabeth Bennet, a rookie counterintelligence officer, lands an intriguing first assignment—investigating the CIA's legendary William Darcy, who is suspected of being a double agent.
Darcy’s charmed existence seems at an end as he fights for his career and struggles against his love for the young woman he doesn’t know is watching his every move.
Elizabeth’s confidence dissolves as nothing is like she planned—and the more she discovers about Darcy, the more she finds herself in an ever-tightening web of danger.
Unexpected twists abound in this suspenseful Cold War era romance inspired by Jane Austen’s classic tale.

First Edition Reviews
“Just when you think you figured it out, you’re wrong!!” – Amazon Review
“One of the slickest Pride & Prejudice variations I have ever had the pleasure of reading.” – Just Jane 1813
“…a who-done-it page turner…” – Amazon Review
“It’s dexterous writing, with a smart premise. Undeceived is unique…” – Amazon Review
“…an incredibly unique and riveting tale.” – Austenesque Reviews

Author Bio
Karen M Cox is an award-winning author of five novels accented with history and romance: 1932, Find Wonder in All Things, Undeceived, I Could Write a Book, and Son of a Preacher Man, and a novella, The Journey Home, a companion piece to 1932.  She also loves writing short stories and has contributed to four Austen-inspired anthologies: “Northanger Revisited 2015” appears in Sun-Kissed: Effusions of Summer, “I, Darcy” in The Darcy Monologues, “An Honest Man” in Dangerous to Know: Jane Austen’s Rakes and Gentleman Rogues, and “A Nominal Mistress” in Rational Creatures.

Thank you for helping me spread the word about Undeceived's re-release!

If you feel that you need help when it comes to writing sociology papers then we could help you. Here at Disability Studies we have some of the best professional writers that are ready and waiting to make your academic writing very much easier. In fact, we can take all the stress and hard work out of writing, so that you are free to get on with whatever else you choose to do

You may decide to try and buy a sociology research paper online somewhere but you need to be aware of some things. Those sites will offer sociology papers for sale but they have been sold to hundreds of other people. You have no idea where those papers came from and who wrote them. You do not know the academic level of the writer and chances are you will have to spend time tweeking the paper to your professor’s specifications. For that kind of hassle you might as well just write the paper yourself.