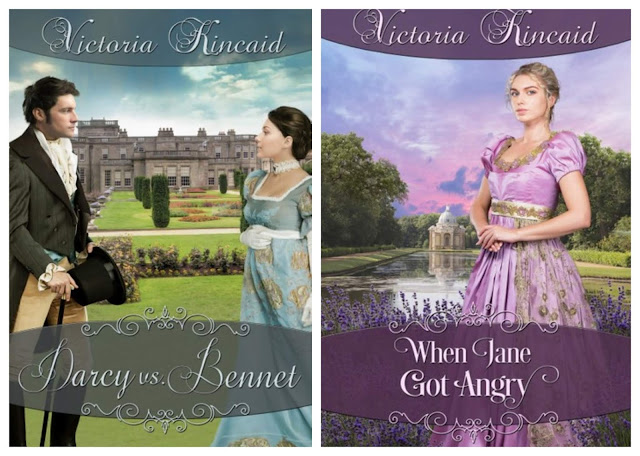 Hi Maria Grazia.  It’s lovely to be back visiting with you!  Readers have told me how much they’ve enjoyed my audiobooks narrated by Stevie Zimmerman and I was fortunate to have her recently record two of my books: Darcy vs. Bennet and When Jane Got Angry (click on the links to hear samples of her narration).

Below are excerpts and details about a double giveaway for both audiobooks.  Good luck, everyone!

“I pray you, tell me your name,” he finally managed.
She slid him a sidelong glance.  “It is a masquerade.  Should not my identity remain hidden?”
He shrugged.  “I do not wish to think of you as ‘that woman in yellow’ for the entire evening.”
Her laugh was genuine, not the polite tittering allowed for a lady of the ton.  “Very well, my name is Elizabeth.”
Elizabeth.  Darcy savored the taste of the name in his mind.  It suited her: elegant but lively.  She did not give her surname, but he supposed that was consistent with the spirit of a masquerade.
“And I am William,” he responded.
She gave no sign of recognition although he was the only William at the masquerade.  “I am pleased to meet you, William.”  Her smile illuminated the surrounding darkness.
“The pleasure is all mine,” Darcy said, and he meant it.
The garden paths were lit by torches at regular intervals, but many areas remained swathed in shadows.  In one such patch of darkness, a couple stood rather close as if they were about to kiss.  A swift glance at Elizabeth showed her blushing at the sight, so he rushed them past it.  Fortunately, Georgiana is up in her bedchamber under the eye of Mrs. Younge!
Darcy ceased worrying about Elizabeth’s offended sensibilities when he heard her laugh.  “Wearing a mask may sometimes become a license to behave more freely than one might ordinarily,” she said.
This struck him as a rather astute observation.  “Indeed.  A mask gives the illusion of anonymity—as if you can be someone else.”  Perhaps that is why I may approach this woman so boldly.
“Are you saying you are not ordinarily a pleasant, gentlemanly fellow?” Elizabeth asked with an arch smile.
She was teasing him, and surprisingly, he loved it.  “Indeed not!”  He smiled.  “As you have guessed, I am a highwayman—and usually quite proud and churlish.  What think you of my thespian skills?”
Her laugh was warm and throaty.  “You had me completely fooled, sir!  You could rival the greatest actor in Covent Garden.”
“And what of you, Miss Elizabeth?  Are you also playing a role?”
“Oh, most definitely.”  Her smile was enigmatic.
“And will you tell me what it is?”
“Perhaps you may figure it out.”
“I see.”  He smiled.  “So you are playing the part of a conundrum.”
He was thrilled to have provoked more laughter.  “Yes, that is me.”
“Miss Conundrum?”
“My mother would say so; I puzzle her exceedingly.”
“In what way?” Darcy asked.
She shrugged and blushed faintly.  “I read all the books in my father’s library and prefer to take long walks rather than remain inside to discuss fashion with the other ladies.”
Darcy experienced a jolt of something akin to recognition.  He had not known it until that moment, but were those not qualities he would seek in an ideal wife?  She had wit; he could attest to that after only a brief acquaintance.  And now he found she loved reading and the outside.
This resulting surge of hope frightened him.  He found himself envisioning a future with this woman although he knew nothing of her family or situation.  Her family might be objectionable, or she might already be promised in marriage.  But reciting these cautions to himself did nothing to extinguish the small ember of hope flaring to life in his heart.
“What do you read?”  He strove to keep his voice casual.  They had reached the edge of the formal gardens without having stopped to admire any of the foliage.  Turning around, they strolled back toward the house.
She gestured expansively.  “Anything!  I read the papers daily.  I believe it is important to know the latest news from the war and elsewhere.  I read every travel book in my father’s library; some of the places sound so fascinating!”
Hope was like the drumbeat of hooves in his chest.  “And poetry?”
“Everything I can find.  Although I am particularly fond of Wordsworth and Shakespeare.  I do believe Lord Byron’s talents to be overrated.”
Darcy could have uttered those words himself.  “I love Wordsworth and Shakespeare as well.”  Good.  His voice was only moderately strangled.

When Jane Got Angry

Hitherto Jane had refrained from mentioning Mr. Bingley to his sister.  She did not wish to appear overly solicitous of his company, particularly since Miss Bingley had spoken of his attentions to Miss Darcy.
But now a spirit of reckless disregard took hold of her.  If Miss Bingley indeed held Jane and her relations in such low esteem, perhaps the woman’s opinion did not signify at all.  Jane might never see her again.  “How is your brother enjoying London?”  She heard the words issue from her lips, although she was still unsure from where she obtained the daring to express them.
Miss Bingley narrowed her eyes as if unhappy that Jane dared to mention him.  “He is quite well, thank you.  I mentioned that you were residing in London, but he is much occupied with Mr. Darcy and his sister at the moment, or he might have called.  He stays at Darcy House, you know.”
He knows I am in London, and he has not called to pay his respects.  Jane’s hands shook slightly where she clasped them in her lap, but she took pains to hide her discomposure. Drawing on her reserves of steadiness and her accustomed placidness of expression, Jane gave a bland smile.  “How pleasant for them.”
Miss Bingley’s smile revealed all her teeth.  “Indeed.  Charles is quite taken with Miss Darcy.  I am extremely hopeful on that account.”
Similar words in a letter had cut Jane deeply before, but now she wondered…  If Miss Bingley had been deceiving Jane about her regard, perhaps she also been wrong about her brother’s affection for Miss Darcy.
No, surely the woman could not be so awful.  Would she actively work against her brother’s happiness?  Nobody could be so cruel.
And yet…Jane tried to observe Miss Bingley dispassionately.  The other woman sat on the edge of the settee, as if she feared the entire piece of furniture were infected with fleas.  As Aunt Gardiner attempted to engage the woman in conversation, Miss Bingley almost completely ignored her.
Perhaps Miss Bingley was capable of scheming against Jane.  Lizzy had proven correct about many other assertions about the woman.  But how could Jane ascertain the truth?  Without an opportunity to meet Mr. Bingley, it seemed a hopeless business.
And yet…Jane was not quite ready to concede defeat.  What would Lizzy do in such circumstances?  Surely Lizzy would not simply surrender.
Aunt Gardiner and Miss Bingley had reached a lull in their conversation. Imagining herself as Lizzy, Jane stepped into the breach.  “You said Mr. Bingley was much taken with Miss Darcy.”
“Y-Yes,” Miss Bingley said uncertainly.
“Then I suppose they have danced at balls?  Taken carriage rides together?  Has he purchased her flowers?”  A secret thrill pulsed through her body.  Jane Bennet would not have been so bold, but Jane-as-Lizzy could be.
Miss Bingley squirmed in her seat and coughed.  “I…um…I do not believe things have proceeded quite so far. He did dance with her at the Harringtons’ dinner.  But she is not out yet, so she does not attend balls.”
Aunt Gardiner seized on this information.  “Not out?  Did Mr. Bingley secure permission from Mr. Darcy to court his sister?”
Miss Bingley’s hands fidgeted in her lap.  “I do not believe there has been any formal…”
When Miss Bingley’s voice faded, Aunt Gardiner continued, “Miss Darcy is full young to be considering matrimony already.  Does her brother approve?”
Miss Bingley pulled herself to her full height and regarded the other woman disdainfully.  “I have not discussed the subject with Mr. Darcy.”
“But you have seen them together?  Observed your brother’s partiality?” Jane said, feeling a bit giddy.  Even Lizzy would not have been so bold.
“I have not had the pleasure of observing them together very often,” Miss Bingley admitted. “But they have been much thrown together at Darcy House…I believe.”
Aunt Gardiner regarded Jane with a triumphant expression. Indeed, Miss Bingley’s stammering explanations suggested that she may have manufactured much or all of her brother’s interest in Miss Darcy.
Miss Bingley pulled her reticule into her lap with an irritated sniff, standing abruptly.  “I am afraid it is past time for my departure.  Louisa is expecting me to attend her for a bit of shopping.”

Enter the giveaway below to win  Darcy vs Bennet or When Jane Got Angry audiobook: 2 winners, an audiobook each.  The contest is open internationally.


a Rafflecopter giveaway
Posted by Maria Grazia at 07:30

So happy these books are being released on audible and love that Stevie is narrating as she does a fantastic job.

Love anything relating to Jane Austen.

These look amazing! I read and loved President Darcy and Stevie is a narrator worth following!

I love audiobooks. They are very convenient and I love anything Jane Austen.

I loved reading When Jane Got Angry. It was a joy to watch her stand up for herself rather than just accepting poor treatment. You go Jane!

Both of those excerpts have left me panting for more! I love the Audible versions of my books and they get "read" the most. Looking forward to reading both of these books!

Thank you for the giveaway. Love both books!

Thank you for the chance to win one of your books.Love them both but I am partial to Darcy vs Bennet

Wonderful excerpt. Love Victoria’s stories and fun to revisit in audio. I do not have Darcy vs Bennet yet so would love a chance to win.

I'm so excited to have won this audiobook, I'm looking forward to listening to it. Thanks Victoria and Maria for the giveaway.