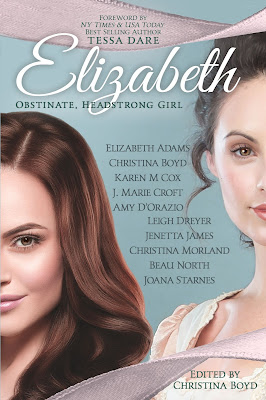 For over two hundred years, Elizabeth Bennet has enchanted and inspired readers by being that “obstinate, headstrong girl” willing to stand up to the arrogance and snobbery of her so-called betters. Described by Austen as having a “lively, playful disposition,” Elizabeth embodies the perfect imperfections of strong-willed women everywhere: she is spirited, witty, clever, and loyal.
The book under the spotlight today is a romance anthology, ten Austenesque authors sketch Elizabeth’s character through a collection of re-imaginings, set in the Regency through contemporary times.

In ELIZABETH: OBSTINATE, HEADSTRONG GIRL, she bares her most intimate thoughts, all the while offering biting social commentary about life’s absurdities. Elizabeth overcomes the obstacles of others’ opinions, not to mention her own flaws, to find a love truly worthy of her—her Mr. Darcy—all with humor and her sparkling charm.
“I think her as delightful a character as ever appeared in print…” wrote Jane Austen in a letter to her sister Cassandra, January 1813―and we think so too!
Foreword by NY Times & USA Today bestselling author Tessa Dare.
Stories by Amy D’Orazio, Jenetta James, Christina Morland, Beau North, Joana Starnes, Karen M Cox, Elizabeth Adams, Leigh Dreyer, J. Marie Croft, and Christina Boyd.


Paperback will be released on February 18.  The e-book has been available since Monday, March 2,
Our guest today is Karen M. Cox,  a friend of My Jane Austen Book Club,  who contributed one of the stories in the anthology. 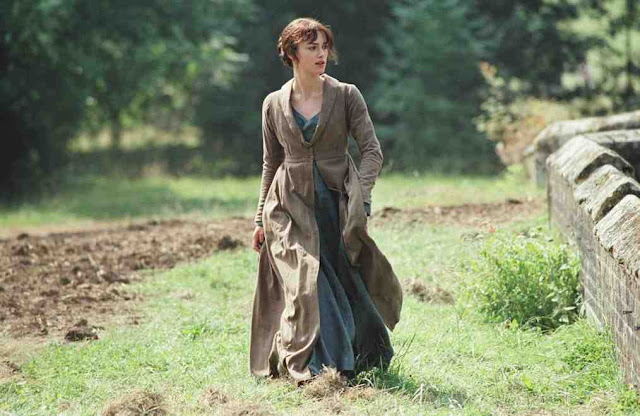 Thank you for hosting our newest Austen-inspired anthology on its launch around the globe!

My story in Elizabeth: Obstinate, Headstrong Girl is titled “Resistive Currents”—it’s the story of Beth Bennet, a 1980’s college student in what was (and still continues to be, although not to the degree it used to) an unusual field of study for women. My Beth is a student studying electrical engineering at fictional Fordyce University.

When Christina Boyd first approached me about the Elizabeth anthology, I was intrigued and wanted to jump right into it, but to be honest, I was a little uneasy. Because much of my own work has been set in the 20th Century, (and my story in The Darcy Monologues was contemporary) Christina asked me write a modern or other era story about our beloved E. I approached the task with some trepidation—we ALL think we own a little piece of Elizabeth Bennet, “as delightful a creature as ever appeared in print.” I really wanted to get this story right.

I thought of all the traits I admired about Elizabeth: cheerful, self-assured, witty, honest, full of fun—and having some inner strength that made her know her own mind (even when it conflicted with what society—or her mother—said she should want.)

Around the same time I was mulling this over, my daughter moved home for the summer. We spent a lot of time together because it was the first time she had lived with us since leaving for college three years before. She and I have always been close, and over the years we’ve had many discussions about the unique challenges she faced being one of six female electrical engineering students in her university class. It isn’t all struggles of course—there’s pride and accomplishment, solidarity among peers (male and female) who are soldiering alongside her, and some hilarious moments, too. It struck me that my daughter’s tenacity, along with her occasional, inevitable flashes of defensiveness, reminded me somewhat of Elizabeth Bennet’s character. Pride and Prejudice is, after all, a young woman’s story—a journey to “know thyself.”

I didn’t feel comfortable writing about a present-day college student (that was too close for comfort), but then, I had an idea to write a story about a young woman in an engineering program of another era.
Fortunately, I knew another electrical engineer to prod for any technical information I might need from that era.

Yes, I’m surrounded by them (my son is also an electrical engineer.)

So, armed with some ideas in the present and the near past, I began to write.

However, the story of our Obstinate, Headstrong Girl is a story that crosses generations, reaching out to us from the Regency era and every era since. I wanted to include that timeless Elizabeth-like element too, and I did find a way to do it…but, Gentle Reader, you’ll have to read the story to find out exactly how ;)
Karen M. Cox

KAREN M COX is an award-winning author of five novels accented with romance and history: 1932, Find Wonder in All Things, Undeceived, I Could Write a Book, and Son of a Preacher Man, as well as an e-book novella companion to 1932, The Journey Home. She also contributed short stories for several Austen-inspired anthologies. Originally from Everett, Washington, Karen now lives in Central Kentucky with her husband, works as a pediatric speech pathologist, encourages her children, and spoils her granddaughter. Connect with Karen: 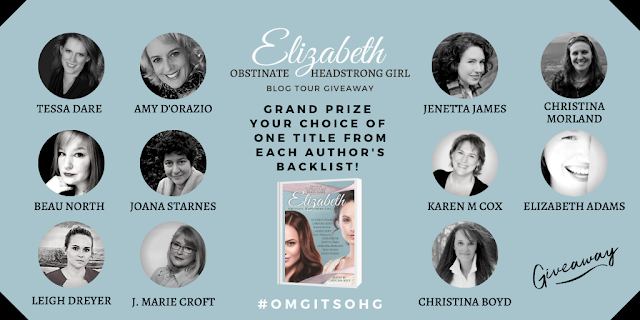 This Blog Tour began February 18 with announcement and cover reveal at Austenesque Reviews, and we hope you will continue to join us and connect with each author about their “Elizabeth” story. We’ve included a Grand Prize package giveaway (a book of your choosing from each of the eleven author’s backlist) as well as additional giveaway: my Silly Austen-inspired blank note cards and coordinating coffee mug. Open worldwide, so be sure to participate. 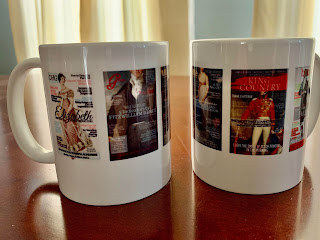 1) Enter the Rafflecopter for the Grand Prize package of books
and
2) comment on the blog stops to be counted for the additional giveaway (you need not comment everywhere to be entered in that drawing but we hope you’ll have your share of the conversation.)
Ends March 31. 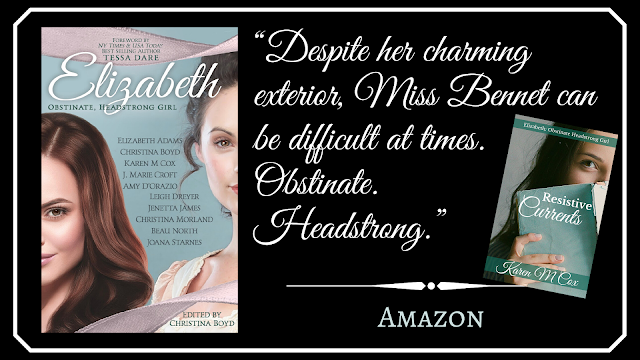 I love how Karen thoughtfully figures out how to make a story honest. They say “write what you know” and coupled with how we “all think we own a little piece of Elizabeth”—I think Karen’s story works. Like most reimaginings tend to do, taking a little here, a little there, from Austen’s canon to create something entirely new... Karen M Cox is a master at this!

Also, I must also give Karen much appreciation for her wonderful formatting of this collection. All the interiors with the individual images and layout are because of Karen’s Elinor Dashwood-like generosity and patience as she took my long list of WANTS and made them reality! The paperback is especially lovely and I am proud to have this on my shelves!

Thank you, Maria, for sharing all this to your lovely blog. We appreciate all you do to promote Austen and Austen- inspired world!

Why not Elizabeth should be the question. She, as Darcy, have become iconic figures in literature and translate easily into any year.

I love any well written story about Darcy and Elizabeth no matter the era, so this book totally qualifies! I absolutely enjoyed all the stories in this book and I loved how this one combined the eighties Elizabeth with her ancestor’s story. Darcy was as charismatic as he usually is in my opinion. Loved it!
Well done to all the people involved.

Love the writing of so many of the authors involved so know it must be a great read.

Hello from Kentucky :) Thanks so much for hosting our dear girl (Elizabeth) today! I think I speak for all the authors when I say, I hope our love for Austen's most famous heroine shines through these stories. We're all so excited for this anthology to finally find itself in readers' hands.

I love that the heroine is studying such a complex subject. I'm sure you had to consult your husband often. Can't wait to read it

Elizabeth does indeed have a lot of traits to admire.

This is a great idea! I love seeing different interpretations on Elizabeth’s character.

I loved reading about how your daughter inspired your great story, Karen! Thanks for sharing that personal insight. I'm a big fan of yours, especially how you continue to make Jane Austen resonate with modern readers. Thanks -- and thanks, Maria, for hosting!

Love how you surrounded by electrical engineers for inspiration. Looking forward to reading your story!

I know lots of female engineers.

So wonderful to discover the back-story behind Resistive Currents! Thanks for sharing this with us, Karen, and thanks for your wonderful writing!