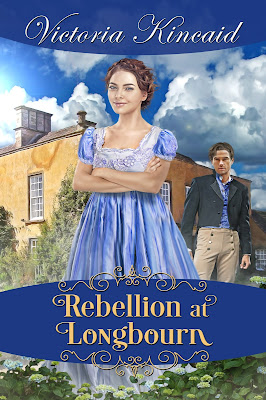 Join me in welcoming Victoria Kincaid back to My Jane Austen Book Club. She's here to celebrate her new release with an excerpt and the giveaway of an ebook copy.

Hello Maria Grazia and thank you for welcoming me back!  Readers’ reception of Rebellion at Longbourn has been very favorable so far, and I hope your readers will enjoy the excerpt below.  It takes place when Darcy visits Longbourn after a two-year absence. He has been away and only recently learned that Collins took possession of the estate.

“Oh yes!”  Charlotte’s expression softened as it always did when she discussed her son.  “His name is Robert, and he…” Mr. Darcy had unwittingly hit on the only subject that would make Charlotte Collins garrulous, but he seemed quite content to listen to her enumerate her son’s amazing achievements, among them: holding up his head, rolling over, smiling, and growing two teeth.

As Charlotte spoke, Elizabeth suddenly realized Mr. Darcy was staring at her hands.  As the weather grew warmer, she had not troubled herself to don gloves after working in the kitchen.  But her bare hands were red and chafed, bearing callouses and blisters—the unmistakable signs of labor.  They were not the hands of a young lady.  Elizabeth flushed and fought the urge to hide her hands under the folds of her gown.

There is nothing I might do now, she consoled herself.  He has noticed and is unlikely to forget.  The damage is done.
Why should I care what he thinks of me anyway? He is wholly unconnected to me and my life.
She did not understand why he had troubled himself to visit since he did not appear particularly interested in any of the conversation.  Let him think what he likes.  My hands are calloused because I am caring for my family.  Elizabeth raised her chin and stared at Mr. Darcy, daring him to criticize her callouses.  After a moment he reddened and averted his gaze.

Now her mother was recalling the halcyon days when Mr. Bingley had thrown a ball at Netherfield.  Elizabeth supposed the reminiscences did no harm, although she could still recall how embarrassed she had been by her mother’s indiscretions and Mr. Collins’s want of delicacy at that event.   It was also the only time she had danced with Mr. Darcy.  Did he now regret it?
Mr. Darcy had never been an intimate friend of the Bennets, and surely he knew how Lydia had damaged the family’s reputation.  But he had never liked Mr. Wickham; perhaps he was more willing than others to blame the officer rather than their sister.
Perhaps Mr. Darcy deserved her approbation rather than her scorn.  She gave him a small smile, and he returned a bemused expression.
Her mother chattered with great animation, most likely still nurturing some hope that Mr. Darcy might convince Mr. Bingley to resume courting Jane.  Nothing would make Elizabeth happier.  If even one of the Bennet sisters could escape their slow descent into poverty, Elizabeth would be quite relieved.
But it was a vain hope.  Jane was an even less acceptable match for Mr. Bingley than she had been before.  Elizabeth wondered if Mr. Darcy was regretting his decision to visit Longbourn. Those regrets must have surely intensified when the door opened to admit Collins.  The man was breathless, having doubtless rushed to the drawing room when he learned of Mr. Darcy’s visit.
“Mr. Darcy, sir!”  Her cousin bowed, shook the other man’s hand, and then bowed again.  “You are very welcome.  Most welcome indeed to our humble abode.”  Standing beside Charlotte, he took her hand and gave her a simpering smile that would have made Elizabeth laugh had she not seen it so frequently as to become immune.  “Mrs. Collins and I are quite delighted to have you grace our home.  You honor us with your presence.”
Mr. Darcy clearly believed the effusiveness of the welcome was unnecessary.  “It is my pleasure,” he said shortly, eyeing the door as if considering an escape, but instead he took a sip of his tea.
“I must say—and forgive me that I did not say this yesterday, but I was quite amazed to see you at the assembly; indeed I was nearly overcome with shock—but I must say welcome home from your travels.  I hope you did not find the Colonies too excessively savage.” Collins did not wait for a response.  “Lady Catherine always said she would take great pleasure in visiting the Colonies, but unfortunately her stomach rebels at the slightest boat trip.  I cannot count the number of times she has said to me, ‘I would show those ignorant colonists how a truly great nation functions.’ And I replied that indeed those people had been deprived of true greatness.”
“They seem to be struggling on despite that deprivation,” Darcy said dryly.  Elizabeth had to cover her mouth to stifle a laugh.

Collins nodded earnestly as he settled himself beside his wife and accepted a cup of tea from her.  He often poured a little brandy into his tea, but fortunately he did not do so in front of their guest.  “Have you visited Rosings Park since your return?” he asked.
“I have not had that pleasure,” Mr. Darcy said.  “I arrived home only a few days ago.”
Elizabeth’s eyebrows rose.  His business in Meryton must be very urgent indeed.  She wondered what it could be since she was unaware that he possessed any connections to the neighborhood.
Collins’s gaze flicked quickly to Elizabeth; she wanted to roll her eyes.  Charlotte had suspected Mr. Darcy had formed an attachment to her, but really it was nonsense.  “You should visit Kent at once,” her cousin admonished him.  “Your aunt has felt your absence most keenly and is naturally most eager to celebrate a certain long-awaited event.” No doubt her cousin was hinting about Mr. Darcy’s engagement to Anne de Bourgh.  Elizabeth had never heard the man himself refer to such an engagement, but he did not now deny it.

“I will visit Rosings in due course,” he said impassively.
Collins bounced with energy, obviously unsatisfied with this vague promise.  “Lady Catherine is most eager to see you.”
Mr. Darcy regarded the man coolly.  “I have pressing business elsewhere.”
Collins glanced around the room, perhaps seeking a change of subject.  “Where are Kitty and Mary?  They should be here with our guest.”
“I sent them to the market for tonight’s dinner,” Charlotte said hastily.
“Hmph.” Collins settled into his chair, dissatisfied.  He must believe they should wait at home all day in anticipation of a visit.

Elizabeth reached out to take a lemon biscuit, a rare treat.  Her cousin frowned on such indulgences unless guests were present.  As she nibbled on the sweet, she was aware of Mr. Darcy’s eyes upon her.  No doubt he was chronicling every worn seam and loose thread in Elizabeth’s gown.  Knowing she was flushing, she was not equal to meeting his eyes.

Elizabeth Bennet’s father died two years ago, and her odious cousin Mr. Collins has taken possession of the Longbourn estate. Although Collins and his wife Charlotte have allowed the Bennet sisters and their mother to continue living at Longbourn, the situation is difficult. Viewing Elizabeth and her sisters as little more than unpaid servants, Collins also mistreats the tenants, spends the estate’s money with abandon, and rejects any suggestions about improving or modernizing Longbourn. After one particularly egregious incident, Elizabeth decides she must organize a covert resistance among her sisters and the tenants, secretly using more modern agricultural methods to help the estate thrive. Her scheme is just getting underway when Mr. Darcy appears in Meryton.
Upon returning from a long international voyage, Darcy is forced to admit he cannot forget his love for Elizabeth. When he learns of the Bennet family’s plight, he hurries to Hertfordshire, hoping he can provide assistance. Sinking into poverty, Elizabeth is further out of Darcy’s reach than ever; still, he cannot help falling even more deeply in love. But what will he do when he discovers her covert rebellion against Longbourn’s rightful owner?
Falling in love with Mr. Darcy was not part of Elizabeth’s plan, but it cannot be denied.  Darcy struggles to separate his love for her from his abhorrence for deception.  Will their feelings for each other help or hinder the Rebellion at Longbourn?

I do wonder what happens after Mr. Darcy leaves. When does he see Elizabeth again and how does he learn about the "rebellion"? Looking forward to reading this gem.

This sounds interesting. I wonder how ODC reach their HEA. I am looking forward to reading this story.

Oh, poor confused Elizabeth!
How interesting that Darcy came to Meryton immediately after his return to England. I so look forward to reading this!
Thanks for the giveaway!

Now that things have settled down I can return to reading on a regular basis; I truly have missed reading my most beloved books. You threw out a small tidbit and I want to take a huge bite; I can hardly wait to see if I am the lucky recipient of a great book or if I stand in line and purchase it at the nearest book emporium.

This is going to be a good story! I'm very much looking forward to it.

Wonderful excerpt. I look forward to seeing how this plays out! Congratulations!

Thank you for the excerpt. I feel for EB, admire and love her spirit despite her circumstance.

It looks like it will be a compelling story!

Thanks for Sharing this information I suggest to keep sharing like this. I also recommend visiting best astrologer in india