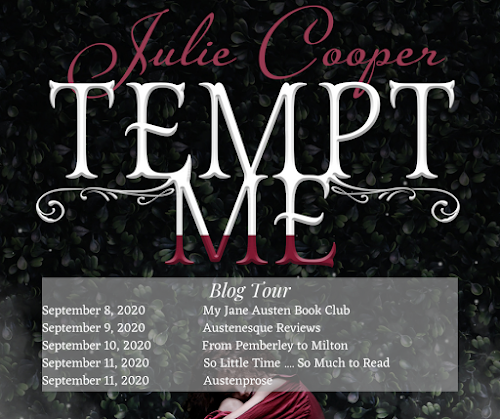 TEMPT ME BY JULIE COOPER

It is a truth universally acknowledged that a single vampyre must be in want of a wife. Someone biddable, her memories easily expunged to allow for strange, inexplicable deeds and baffling circumstances. A tractable creature, of average intelligence, willing to attend to the business of producing heirs and keep out of all else. A girl easily moulded, incurious, indifferent, and demanding nothing beyond access to his fortune.

Fitzwilliam Darcy knows exactly who he needs. He can fix on the hour, the spot, the look, and the words which laid the foundation for an obsession he rejected. But ten years later, at an assembly in an obscure village in Hertfordshire, he finds himself in the middle once more.

His needs are unalterable. But can he resist the one woman he truly wants?

There were many challenges to his vampyric nature, but Fitzwilliam Darcy faced the most difficult of them as he danced a quadrille with the lively Miss Elizabeth Bennet. His brain had firmly and logically decided on Caroline Bingley as the answer to the dilemma of his needs. Caroline held only two emotions of any potency—greed and lust. The greed was easily satisfied with baubles, the lust more easily sated still. For a man—and Darcy still considered himself one, despite all evidence to the contrary—with his gifts and afflictions, such a personality as Miss Bingley’s was ideal. No overwhelming grief or despair when he disappointed her, no unplumbed depths to worry and annoy and assault his peace of mind. The fact she already understood his nature and the secret of his existence was a bonus nearly carrying the day.

The rest of his person, however, had proven singularly uncooperative towards his brain’s choice of companion. Whereas Caroline never roused much beyond a slight appreciation for face and figure, every bit of his primitive attention riveted on the lovely picture Miss Elizabeth made as she twirled and dipped in time to the music. He might not even be in the room for all the attention she gave him, her happiness in the dance having naught to do with her partner. He could almost feel her joy—and only with his nascent ‘human’ senses. Her aura gave nothing away. The years since he had seen her had done nothing except redouble his interest. In fact, he had been able to dismiss her ten years before only because of her extreme youth, blaming her near-death and the subsequent protective feelings as an anomaly. He had thrust her from his mind. From his soul.

But now, with the clarity of hindsight, he could see that—all unknowing—she had become his standard for beauty, a measure by which he judged perfection. With disquiet, he now saw Caroline passed muster only because there was some similarity in colouring and hair. Devil take me.

He could almost feel the blood rushing in his veins, tingling in his gloved hand every time it met hers. As the exercise caused her heart to beat faster, an answering rhythm from his own matched it—territorial and primal—from a part of himself he had believed extinguished. He had known desire countless times; this was nothing like it, his instinct urging him to sweep her off her feet, to cart her away from this simple country dance with its simple country society and claim her as his own. Neither did his instinct much care what Miss Elizabeth might have to say about the matter, though his brain lodged several fervent reminders. Not since he first reached maturity—struggling to conquer the inherent, overwhelming hungers of a blood-born male vampyre—had he experienced such a detachment between mind and body, the beast and the man.

There was only one thing to be done: depart from this assembly—from this country—as quickly as possible. But when the dance was over, Miss Elizabeth safely restored to her sister’s company, he did not leave.

Instead, he watched her, seldom able to look away. Unfortunately, his notice caused an unwelcome effect; suddenly, a dozen eligible males eyed her with new attention. He could not resist aiming his will upon each one, learning what they felt for her. In some, he sensed mild interest and typical male appreciation. Some felt curiosity—directed, he supposed, at his reasons for pairing with her. The last one, though, a man every bit of sixty years, oozed a filthy comingling of lust and craving, his beady eyes straying where no gentleman’s ought. Darcy felt his own eyes going dark.

Julie Cooper, a California native, lives with her Mr Darcy (without the arrogance or the Pemberley) of nearly forty years, two dogs (one intelligent, one goofball), and Kevin the Cat (smarter than all of them.)  They have four children and three grandchildren, all of whom are brilliant and adorable, with the pictures to prove it. She works as an executive at a gift basket company and her tombstone will read, “Have your Christmas gifts delivered at least four days before the 25th.”  Her hobbies are reading, giving other people good advice, and wondering why no one follows it. 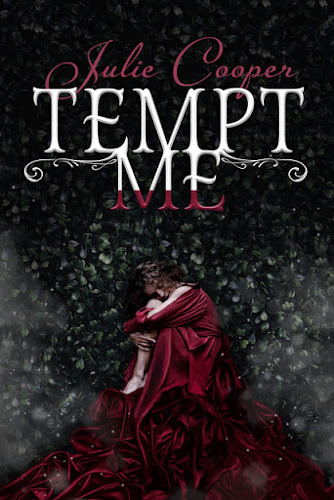 Tempt Me is out today!

Check it out on Amazon

Five ebooks will be given out at the end of the blog tour. Winners will be selected from those who comment on the blogs and within a week from the tour's end.

Squeeeeeee! It’s even better than I remember! This came up on my kindle today and as soon as I’m done with the book I’m currently reading this one is next! And I cannot wait!!!! So happy to see this published and with a sublime cover. Congratulations Julie!

Oh my, that was one intriguing excerpt! Congratulations on publishing, Julie!

Thank you Debbie, Jessie, Denise and Annilina!! Your kindness is much appreciated.
And thank you Maria, for posting the excerpt on release day!

Love the premise and have heard fantastic things about this book. Thanks for the chance to win a copy!

Love, love the cover! The excerpt is powerful and intriguing. Congratulations on the release day! Thanks for the chance to win a copy!

Thanks darcybennet & Shelley!
Best of luck in the drawing!

I like the idea of Darcy being a vampyre. What a great cover too!

This is going to be most interesting! Thank you for posting the excerpt.

Congratulations on this newest release. Sounds like a great story.

Congrats on your latest release, I'm looking forward to reading it!

The excerpt is very fascinating. It's different than what I imagine Darcy to be. I can't believe that he will choose Caroline as his potential wife.

Such an intriguing premise and excerpt. Congratulations on the release.

Thank you for sharing! Love it!