ALL THAT THIS ENTAILS BLOG TOUR & GIVEAWAY 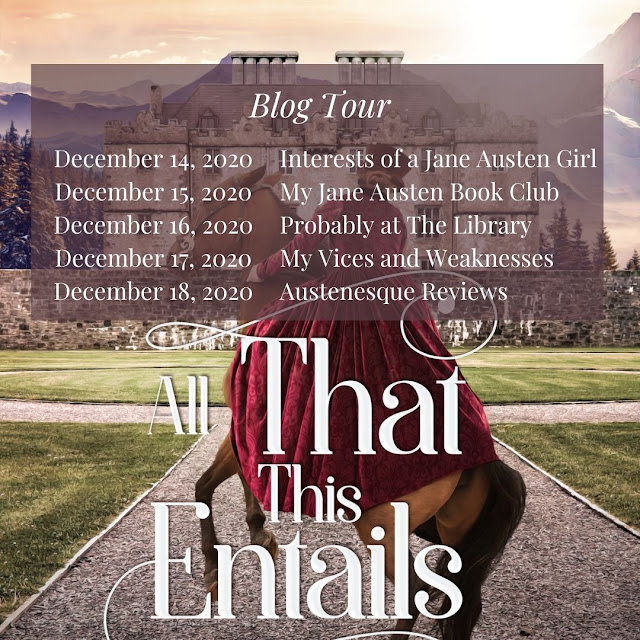 I have loved the works of Jane Austen since I was a young woman. I have always identified with Elizabeth Bennet in particular being the second of four daughters with a love of reading and a wry sense of humour myself. I developed a special affinity for Pride & Prejudice after watching the BBC miniseries with Jennifer Ehle and Colin Firth. What warm-blooded single woman wouldn’t with Colin Firth sending smoldering looks your way through your television screen?

In the mid-2000’s, I discovered the world of Jane Austen fanfiction on the internet. By this point, I had never read a variation of a Jane Austen novel. I become instantly intrigued with the different ways such a beloved story could change. What happens when you alter the timeline? Or add a new character? What becomes of our favorite couples if Bingley and Jane don’t get together or Darcy & Elizabeth meet as children? So many amazing possibilities!

After reading many stories, I decided I would try my hand at a story of my own. Some of my favorite story variations involve the equalization of Darcy and Elizabeth’s financial and social standings. I like when Darcy’s pride in his wealth and familial connections is undermined by Elizabeth rising to precedence. And I like that Elizabeth’s prejudices are softened as she enters that society and better understands Darcy’s character. Then it became a matter of exactly when Elizabeth’s change in circumstances should occur? At the very beginning? After they meet, but prior to Hunsford? After Hunsford? Again, so many possibilities!

And then I had to decide how rich and connected Elizabeth would be. How would the change occur? What would happen as a result? What would Darcy have to do in order to earn Elizabeth’s regard? How would it affect the remainder of the timeline and the other characters we know and love? What happens with Bingley & Jane? How do the rest of the Bennets react to the change in circumstances? So many questions to explore and determine. Ultimately, out of all this All That This Entails was born.

It’s a very interesting process to be the writer rather than the reader. It’s a great responsibility, especially when you are dealing with a story and characters that people know well and love dearly. I hope that my little variation brings joy to the many fans of Jane Austen and Pride & Prejudice. That is all any author in this genre can hope for. 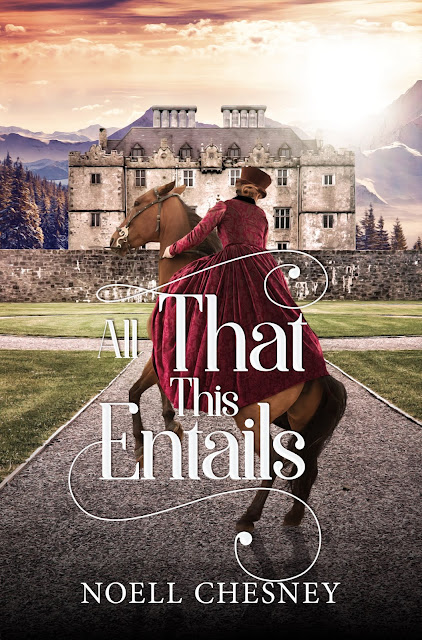 ELIZABETH BENNET COULD SCARCELY CREDIT THE NEWS when a letter sent to her father, from relations she did not know existed, informed them that untimely and unfortunate events would result in Mr Bennet inheriting the dukedom of Everard. In the blink of an eye, the Bennets' lives are transformed— Elizabeth and her four sisters are wealthy, titled, and the talk of the ton.

But Darcy’s heart still belongs to her, as much as it ever did, and he sets off for London determined to win her hand. But can he prove to her that he has changed, particularly when her entire life has just altered?

This Pride & Prejudice variation is a novel-length tale using the characters of Jane Austen in a story of the author's imagining. 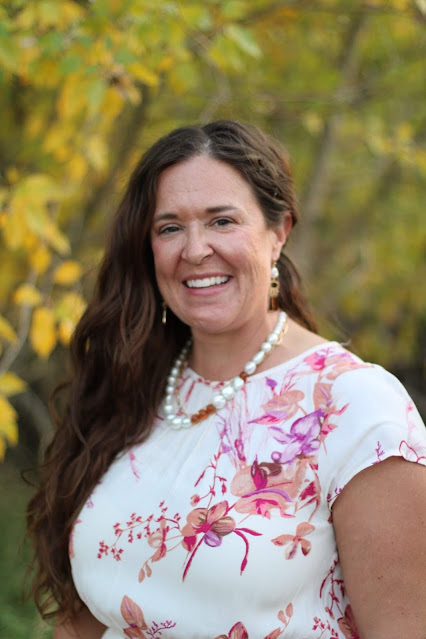 Noell Chesney’s childhood love of reading lead to an introduction as a young woman to the works of Jane Austen. The second of four sisters, though no fear of starving in the hedgerows, resulted in a special affinity for Elizabeth Bennet. After reading numerous works of fanfiction by other authors, a decision to try her hand at composing her own story was born. Noell Chesney has a Bachelor of Science from the University of Colorado. She enjoys cooking, boating, camping, and of course reading. She and her husband, Benjamin, live in Highlands Ranch, CO with their three children and two dogs.

This book looks absolutely wonderful--it's on my Christmas to read list! Congratulations with the launch, Noell, and thank you for hosting, Maria :)

Congrats on the release!

This book sounds great! I can only begin to imagine Darcy's reaction to the change in Elizabeth's social status. Oh,my, what will Caroline Bingley say? Thank you for the giveaway.

Congratulations on this release. Thank you for the opportunity to win a copy.

Congratulations on the release of your book. A lot of us are eagerly awaiting Lizzy's elevated status. I wonder how many will Darcy have to battle to win his lady's hand?

Thank you for the giveaway