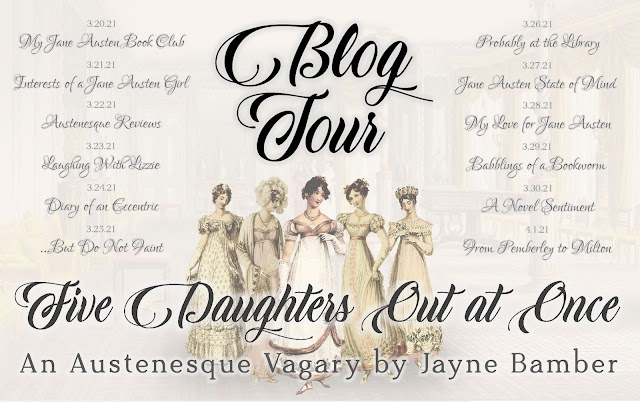 Hello Dear Janeites, it is a pleasure to be back at My Jane Austen Book Club to kick off the blog tour of my new release, Five Daughters Out At Once. 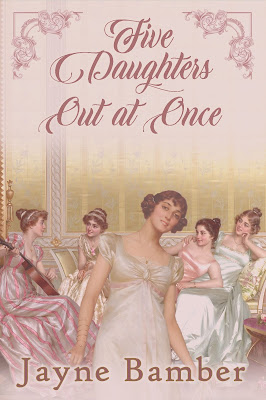 This book takes it’s name from one of Lady Catherine de Bourgh’s phrases of astonishment when Lizzy is visiting Rosings, and Lady Catherine is a central figure in this story – after a terrible fire at Rosings, Lady Catherine is roused from her severe melancholy only when she hears of Mr. Collins’ villainy to the Bennet sisters, who have been orphaned due to a similar tragedy. Netherfield Park is let at last – not by Mr. Bingley, but by the Queen of Condescension herself (we can safely assumed that shelves are swiftly installed in all the closets!).

Today I will be sharing a chance to win a free eBook, as well as an excerpt giving readers a first glimpse of my eighth novel – and the only glimpse of Mr. Bingley in the whole tale (have no fear, this tale features many other single gentlemen in want of wives!)

Fitzwilliam Darcy looked askance at his best friend, Charles Bingley, and then cast a sweeping gaze of disapproval about their environs. Netherfield Park must have once been a grand, elegant house – they had been told as much, several times over, by Mr. Morris, the solicitor. From it’s once glittering and glorious heyday, it had fallen, if not into outright dereliction, into what Darcy could only call a deep depression. The thick coating of dust on every surface might be expected in a house long shut-up, but there was something heavier and lonelier about the stillness they were disturbing as they toured the place. Even Bingley, always cheerful, and often obliviously so, seemed to feel it – and they had not long to wonder why.

Mr. Morris, the solicitor, was short, stout, and as loquacious as he was rotund. “Sad business with this old place,” he observed as he led them through the gallery.  “Tragic, really – cast a pall over the whole village.” Mr. Morris hesitated, sensing that he might say too much and spoil his chance of renting the place. “Of course, your coming along might breathe new life into the place – what a fine thing for the neighborhood.”

Darcy frowned. He wished his friend to choose wisely in taking an estate – that it should be good for the neighborhood might be said of any house Bingley rented, but Darcy was concerned with what was best for Bingley himself.

Predictably, Bingley showed no such discernment, and instead gave way to his own natural curiosity. “What kind of tragedy? I can well imagine this place being full of old ghosts,” he said with a half-hearted laugh, glancing up at the row of portraits – generations of previous owners seemed to frown back at them, and Bingley shifted uncomfortably. “Was there some great calamity, then?”

“Not here, not in the house,” Mr. Morris hastily assured them, his ruddy complexion growing pinker still. The portly solicitor fidgeted with his hands for a moment, but in the end he leaned in, as if on the verge of sharing a salacious secret. “There was a most unfortunate event – a ghastly sad thing! My sister, Mrs. Long, lives in the village – she was there, you see.” Mr. Morris adjusted his spectacles as his jowly cheeks quivered and his lips curled into an expression of dramatic sorrow.

Bingley’s interest was clearly captivated; even Darcy, who was skeptical about the veracity of their companion’s information, wished to hear what might follow. He thought it likely that whatever they might be told would only add to his belief that Bingley ought to continue his search for a property elsewhere, and caught himself hoping that the solicitor’s undoubtedly exaggerated tale would put Bingley off the place entirely.

Mr. Morris was gratified enough by their curiosity, and continued without any prompting. “They hold monthly assemblies in the village – or, they used to do. It was a year ago last month, when it happened. All the finest families in the area, the young people from the village and their poor mammas, a great crush of people – some said it was the biggest turnout anyone could remember at the assembly rooms, but nobody quite recalls how the fire started.”

Darcy reflexively stiffened at the mention of a fire, jarred by a similar event affecting his own family recently. He flicked his eyes over to Bingley, hoping to see some little apprehension, but Bingley was listening with the rapt attention of a child. “Was anybody harmed?”

Mr. Morris’s penchant for storytelling gave way to some genuine humanity for a moment; he nodded somberly. “A great many, I am sorry to say. Nearly every family in the area lost somebody that horrible night. All the Mowbrays, who lived here, perished in the fire. Sir Peter was not thirty, poor chap – and engaged to be married. His lady, prettiest girl in the county, they say – she lost her father in the flames, and an uncle too, if I recall. And the Lucases, the nearest neighbors to Netherfield, lost a father and a son – poor Lady Lucas has never been the same since. Her younger son passed a few weeks ago from a fever, but I hear there was some serious neglect – well, dreadful thing, that. Just her and a spinster step-daughter, now.”

The old man let out a wistful sigh, dabbing at non-existent tears with a rumpled handkerchief. Darcy bowed his head for a moment, his thoughts drifting back to his devastated Aunt Catherine, who had lost her husband and only daughter in a fire at her estate in Kent a mere two months ago. The tragic circumstances still haunted Darcy, and he wished nothing more than to remove himself at once from this similarly devastated place.

Bingley peered over at Darcy for a moment, aware of what had befallen Darcy’s relations. “What an awful thing,” he muttered.

“Aye,” Mr. Morris agreed. “Meryton has not been so merry in above a year now. But then, it may yet be again – a pair of fine gentlemen like you coming into the area would be quite a boon to the village, just the thing to excite people. They mean to resume the monthly assemblies, now that everyone’s year of mourning is up, and all signs of the fire mended nice and tidy in the village. You shall find a great many young ladies eager to dance, I daresay. The Bennet sisters are all local beauties, you know, and the Lucas girl is something of an heiress now….”

The solicitor led them through the upstairs rooms, his chatter taking on a lighter tone now, but for all Mr. Morris’s endeavors at deflection, the damage had been done. With a tremendous sense of relief, Darcy perceived from his friend’s countenance that they were in agreement on the matter – Netherfield Park was not the place for Bingley’s bright beginning.

Stay tuned for more excerpts and more chances to enter the giveaway!

Enjoyed the story so far can’t wait to see what happens next.

What an interesting premise, really looking forward to see what other ripples of change this causes going forward.

We are left to think Bingley will not be letting Netherfield Hall - but know that can’t be true. I can not wait to see how you follow this thru. I have enjoyed your other books and look forward to this one as well. Best of luck on the tour!

Oh, this idea is genius, it opens the door for some very interesting things to happen! Looking forward to reading this one! :-)

Thanks to all for commenting! Bingley will not be renting Netherfield, leaving it available for the condescension of the right honorable Lady Catherine de Bourgh - shelves in every closet! It's going to be a wild ride once she swoops in to meddle with the Bennet sisters.

Thank you for the excerpt. Wow, such a loss . Wonder how they will come to meet the Bennet beauties. Hope there's a Bingley-Jane romance too. Feel sorry for Jane losing her fiance in the fire.

This looks fun! I can wait to read how you have changed things up. Congratulations on your new book.