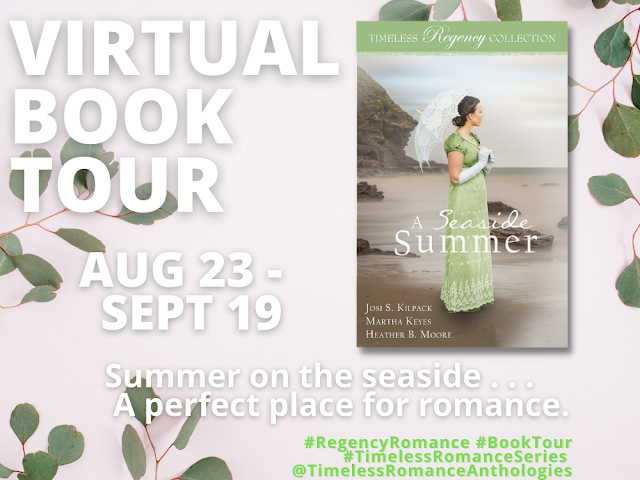 Summer on the seaside . . . a perfect place for romance.
Join us for three novellas in one collection:

The New Countess, by Josi S. Kilpack
Diane knows why the earl asked her to marry him; he needed a mother for his daughter, an heir for his title, and a hostess to assist with his position in Parliament. With two sons of her own, and no security to speak of, she never thought twice about accepting his proposal. Summering at his holiday cottage at the sea was meant to be reward for a busy first year as the new countess, and a time for her to rest before their baby is born. She is expecting lazy days on the beach with the children, simple meals, and keeping her own schedule. When the earl surprises her with a visit, she does her best not to resent the intrusion. When she learns that he came for the sole purpose of being with her and getting to know her better, she realizes that perhaps this marriage can be more than she expected. Is she ready for him to know her and love her and explore this new possibility together? She wants to be, but it is not an easy thing to let go of expectations and open up to an entirely new way of life.
Mishaps and Memories, by Martha Keyes
Judith Jardine’s one chance at a brilliant match is doomed from the start when she is ignored and then mocked by the ton’s most sought-after gentleman. Under a gloomy cloud of failure, Judith is exiled to a seaside cottage to spend the summer helping her sister—and living a life far below the one she experienced for her week in Brighton. When she discovers the man responsible for her misfortune unconscious on the beach, she heeds her better impulses and has him brought to the cottage to be seen to. But James Carlisle has no recollection of who he is, what happened to him, or how he has wronged her, and Judith sees the opportunity to teach him a valuable lesson—unless the deception and her feelings get the best of her first.
Moonlight Summer, by Heather B. Moore
Oscar Rosewell’s life is not lacking in many things even though he lives on the fringes of society due to his father’s ruined reputation. He’s sworn off having any personal relationships with ton members—his only interest lies in keeping his business thriving. He’s content with his day-to-day anonymity, and business keeps his heart from getting exposed. It’s safer that way. Until Oscar meets Miss Dorothea Atkinson. A woman capturing his interest is a rare thing, but Miss Atkinson is nearly engaged to a man of her parents’ choosing. Would it be wrong to wish for something to go terribly wrong between the couple? Soon, Oscar learns that wishing can become a reality, but often, the price is an even heavier thing to pay. 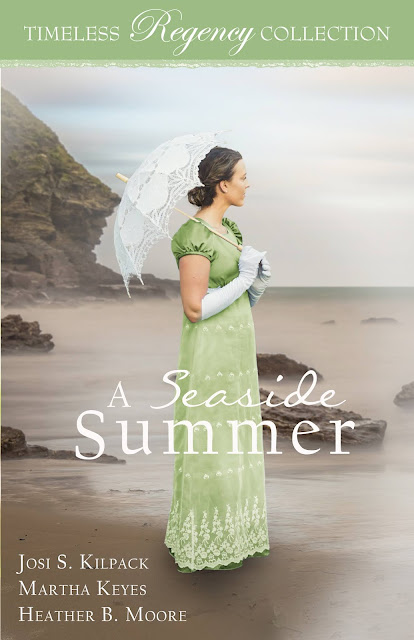 Excerpt  from A Seaside Summer

Diane lifted her face toward the summer sun, closed her eyes, and breathed in the warm, salty air of the ocean breeze. She held her breath while listening to the orchestra of sea birds, crashing waves, and laughing children.

This was what had carried her through the uncomfortable fall, the cold winter, and busy spring of her new life as the Countess of Avery. This was the payoff of managing new households, attending every party on the earl’s arm, and sitting across from the man who was still little more than a stranger to her.

She pushed her bonnet from her head, letting it hang down her back. Now that London Society was not watching how she would perform her role as countess, it did not matter that her fair cheeks had become a bit browner or her brown hair had become a bit fairer. Three weeks in the country and she felt like Diane again.

Diane blinked her eyes open, remembering in an instant that she was watching the children. She turned her head quickly to count wind-blown heads—one, two, three—and exhaled the panic that came so easily to a mother. She put her hand on her rounded belly and fixed her eyes on Benjamin—the child who had called to her—and hurried in his direction while confirming that Alston and Tabby were a safe distance from the water. Some days they played in the surf or swam in a cove some distance farther down the beach—today they were simply exploring.

There were few things that did not excite nine-year-old Benjamin, and upon reaching him, she gathered her skirts up to her knees so that they would not drag in the sand and crouched beside the tide pool, oohing and aahing over the tiny crab he had found.

“It is trapped,” he said, holding a stick but not poking at his discovery, though she was certain he was tempted. “Should I put it back in the sea?”

“No, it is safest right here until the tide comes in.”

“No, my darling. It would not be happy in a people-house.”

He frowned, puckering his eyebrows as he looked back at the crab he could not keep.

“Shall we show the others?” she asked, hoping that the thrill of sharing his discovery would overshadow his disappointment.

When Alston and Tabby joined them, Tabby stretched her arms toward Diane, who lifted the child onto her knee and held her around the waist while pointing to the crab. The little girl shrieked, part fear and part delight, as she pressed into Diane’s shoulder.

Tabby’s mother—the former Countess of Avery—had died when Tabby was born. Trying to make up for the little girl’s loss had been the easiest part of the marriage for Diane. Tabby had proved as eager to be loved as Diane had been to love her. The boys had been excited to have a new sister, and Tabby had quickly fallen into place with them too.

She repeated the word in her mind: husband. Hus-band. Hub-sand.

Ten months had past and it was not any easier to say it in her mind than it was for the boys to say Tabby’s full name—Tabitha.

The boys began to argue over the stick Benjamin had put down, and Diane determined it was time to return to the holiday cottage they would call home for another six blessed weeks. She rose to her feet with Tabby still in her arms, tottering a moment as she shifted Tabby to one hip.

“Are you all right, Mama?” Benjamin asked as he took hold of her arm and looked up at her with his father’s soft brown eyes. Jacob, her first husband, had been gone nearly three years now—he and the former countess had died within months of one another. Back then Diane had only known the Earl of Avery from a distance—they had never been introduced. Diane had met Margaret, the former Countess of Avery, a few times before she had married the earl. Margaret had been young, smart, and had a lovely laugh that made everyone smile. 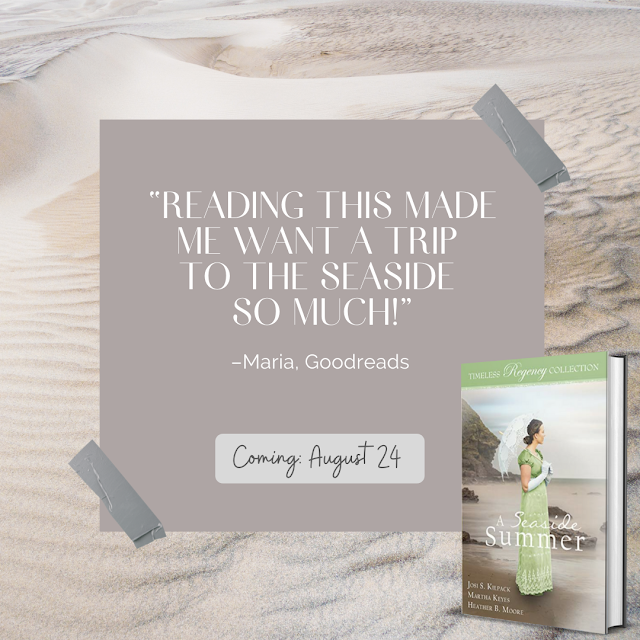 Since 2015, Mirror Press has been presenting the Timeless Regency Romance Collection, a curated anthology of novellas and short stories set in early 19th century England. Featuring bestselling authors from the historical romance genre, the series has hit the USA TODAY bestselling list and charted at #1 at Amazon.com. In October the Timeless Regency Romance Collection will present its 18th anthology, The Inns of Devonshire, including stories by Sally Britton, Annette Lyon, and Deborah M. Hathaway. Learn more about the series and other anthologies published by Mirror Press at their website. 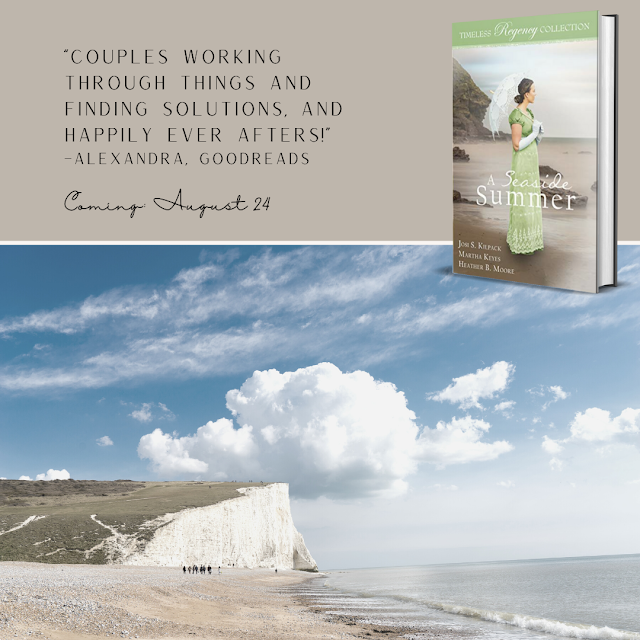 Josi S. Kilpack is the bestselling author of several Proper Romance, Timeless Romance series, and a Cozy Culinary Mystery series. Her books, A Heart Revealed and Lord Fenton's Folly; were Publishers Weekly Best Romance Books of the Year. She and her husband, Lee, are the parents of four children

Martha Keyes is a Whitney Award winning author born, raised, and educated in Utah—a home she loves dearly but also dearly loves to escape whenever she can by traveling the world. She received a BA in French Studies and a Master of Public Health, both from Brigham Young University.

Word crafting has always fascinated her, but it wasn’t until a few years ago that she considered writing her own stories. When she isn’t writing, she is honing her photography skills, looking for travel deals, and spending time with her family. She lives with her husband and twin boys in Vineyard, Utah.

Heather B. Moore is a USA Today bestseller and award-winning author of more than seventy publications. She's lived on both the east and west coasts of the United States, including Hawaii, and attended school abroad including the Cairo American College in Egypt, and the Anglican School of Jerusalem in Israel. She loves to learn about anything in history and, as an author, is passionate about historical research. 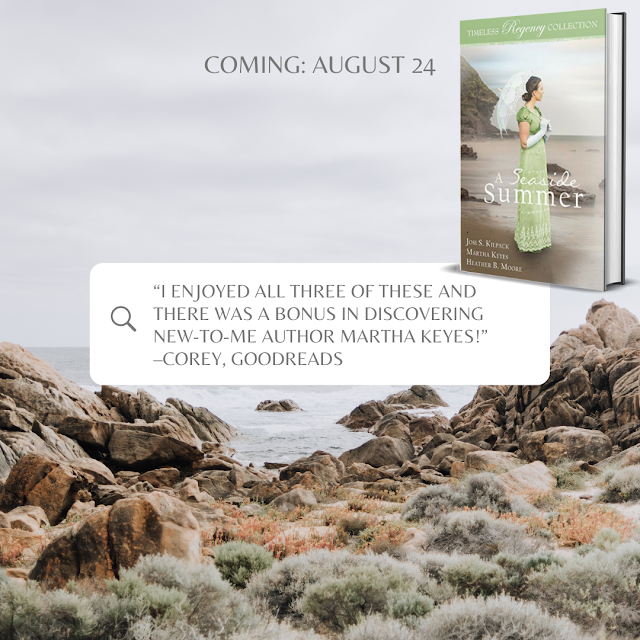 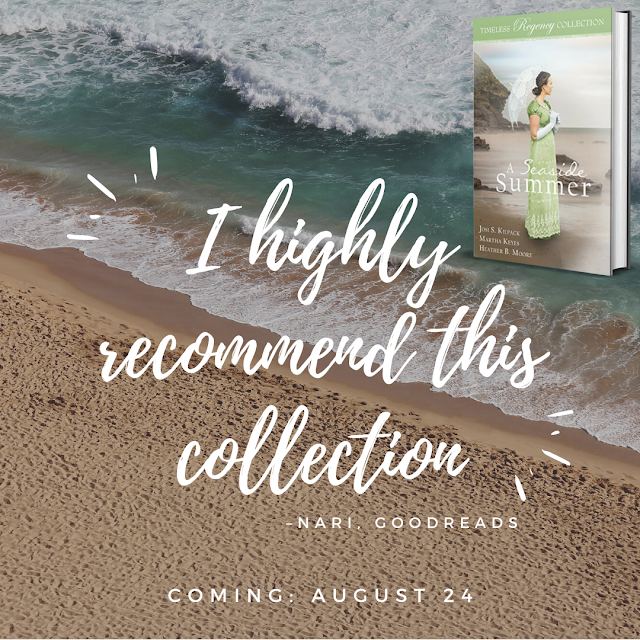 Mirror Press is pleased to offer one digital copy of any of the 16 previous books in the Timeless Regency Romance Collection to one unique winner at each stop on the tour.

To qualify, please leave a comment with this blog post before 11:59pm, September 26, 2021. Visit each stop on the tour and leave a comment to increase your chance to win a book.

This contest is open internationally. The winner will be drawn randomly from the comments and announced on each blog on September 27, 2021. The winner must claim their prize before October 04, 2021. Good luck to all!

I love the way the green stands out on the cover. This looks like a great collection of Regency :)
Thanks for offering a giveaway!

Thank you for sharing the excerpt, Maria. This is a lovely collection of stories for those who like Regency romance and historical romance. I hope you have a chance to read it. Best, LA

Thank you for sharing this lovely excerpt! I'm looking forward to reading this series.

Love your review! This was such a sweet collection of stories.

This article is nice. I must comment that your blog helps me to improve myself many ways. Thank you for sharing this kind of wonderful information. Click 0n this udusok cut off mark for dentistry