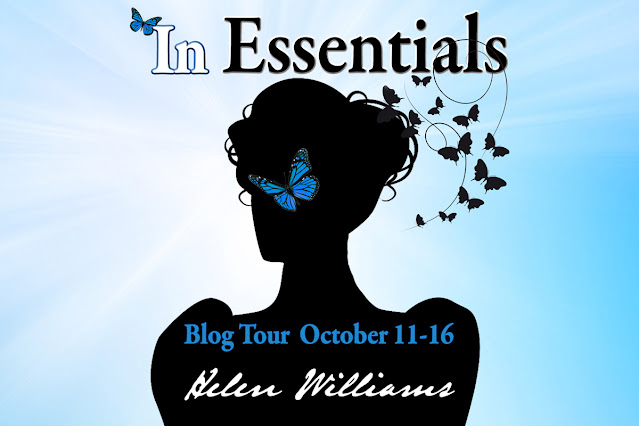 Hi Maria Grazia! Thank you for inviting me to write this guest post for the My Jane Austen Book Club.

In Essentials is very close to my heart. Not simply because it is my first published novel, inspired by a piece of beloved, classic English literature by an author I adore, but because the story itself is very personal to me.

Sadly, I am not referring to the romance at the heart of Pride and Prejudice – I have no Mr Darcy in my life, yet! – but to the new challenge I have thrown at Elizabeth and Darcy. Six years ago I had the first of two pituitary tumours and my life has changed dramatically as a result. I have always wanted to write a story using my experiences as inspiration, and In Essentials was the result.

When deciding between a modern or Regency story, I knew that the former would most likely get bogged down in the medical realities. I could write pages and pages about the wonders of modern medicine that have kept me alive, but it wouldn’t make for a very good novel! In all seriousness, though, the biggest revelation for me in the past six years has been learning to appreciate everything I have, and I wanted the story to focus on that. It sounds like something you’d see on a cat poster, but when something so significant is taken away – your health – you really do value the people, experiences and happiness you have in life so much more.

I hope that readers can feel that sentiment running through In Essentials, and perhaps find some inspiration when facing their own bumps in the road. Writing has been a constant for me throughout the last few years, and I’m lucky to have been able to carry on putting pen to paper. I’m so glad to be able to share this story with you, to show that happy endings do not always have to fit the mould and that you can live without regret for what might have been. 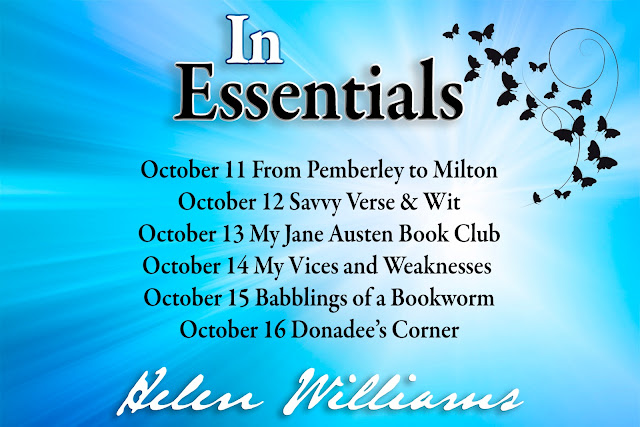 The excerpt below is from Chapter Four, when Darcy and Elizabeth see each other again for the first time.

Poor Hill led the two gentlemen into a scene of chaos. Mrs Bennet lay prostrate upon the couch, crying and complaining to Kitty of her nerves. Lydia looked—if anything—sincerely vexed as Mary leant over Elizabeth and tried to lend her aid. As for Jane, she dashed from the room without a second glance at the visitors, intent upon seeking their father and a servant’s assistance in taking Elizabeth up to her room.

“Good God!” Mr Darcy was distressed to realise that it was Miss Elizabeth who lay upon the floor. “What has happened?”

Lydia tittered, “Oh, it is just Lizzy being sick like a dog—again. It is quite the daily occurrence now, you know.”

Mrs Bennet’s shrill voice cut through the din. “Lydia, be quiet, you silly girl! Make yourself useful and order tea.”

“We would not think of inconveniencing you a moment longer, madam,” Mr Darcy said stiffly. “Come, Bingley.” He turned and walked away, leaving his friend little choice but to hurry after him.

“Had we not better stay and see that Miss Elizabeth is well, Darcy?”

“We would only be in the way presently. A note with a request for a convenient time to call would serve better. I wish to God we had thought of it before now!” Darcy’s quick mind had easily comprehended that the surprise of their coming had somehow led to Miss Elizabeth’s collapse, and he heaped recriminations upon himself. This was an inauspicious beginning, to be sure, and he dearly hoped he and his friend had not caused any serious harm to the lady.

Mortified whilst still prone on the floor, Elizabeth was insensible of the events around her. Once she realised that the gentlemen had beat a hasty departure, she felt so humiliated, so weak, and so utterly ridiculous that she could only cry bitterly. This greatly distressed Jane, Mary, and her father. They had become quite used to the physical manifestations of Elizabeth’s illness, but this outpouring of grief was new, unexpected, and unsettling. After they conveyed her to her chamber, Mr Bennet and Mary committed her to Jane’s tender care and took their leave.

“Will you tell me what has upset you so, dearest?”

The concern on Jane’s lovely face was a dagger to Elizabeth’s heart as she knew that her earlier reactions had been thoughtless and frivolous.

“I am sorry. I never meant to worry you all over something so utterly foolish.”

“You are never foolish, Lizzy—” But Elizabeth’s bitter laugh stopped her.

“You will hear just how foolish I am.” Elizabeth then proceeded to lay her entire history with Mr Darcy before her incredulous sister.

“And so you see, my mad flight was prompted by little more than vanity—foolish vanity! I could not countenance his seeing me thusly upon our first meeting after his proposal, knowing very well that he could no longer think of me in that way, not after I treated him so cruelly and became an invalid. I am a stupid girl,” Elizabeth pronounced with finality, swiping at the tears that persisted in escaping.

“You are very far from being stupid. And as for Mr Darcy, I believe that his feelings would not be so easily swayed by your poor health. He has come, has he not? He was under no obligation to do so.”

“He has returned, and I cannot account for it.” Elizabeth anxiously nibbled at her thumbnail and smiled ruefully when her sister claimed her hand.

“I believe I can. You will call me biased, but I am less surprised by his admiration than you were. I think his proposal of marriage was perfectly natural, even if his expression of it was so very unfortunate. And your reception of it was coloured by the information you had received from Mr Wickham. But Mr Darcy is a just and sensible man—or so he has always seemed to me. No doubt, he has been able to admit that, with such an opinion of him—just or unjust—it was impossible for you to have accepted him. But following such logic, he must also appreciate that it is within his power to improve your opinion and perhaps, with time, bring you to the point where you will be more receptive to his addresses.”

“Jane, you know your reasoning is not sound. Even if he has forgiven me for treating him so abominably, a man once refused—and in such a manner!—would not lower himself to offer again, and never to a lady of indifferent health. Do be serious. All other questions and considerations aside, I can never be a proper wife to any man. I shall never bear children.”

“It might happen one day.” Though Jane protested weakly, they both knew that the cessation of Elizabeth’s courses in the initial weeks of her illness argued strongly against this forlorn hope.

“I shall not indulge in such fanciful musings. And I will not allow myself to regret refusing Mr Darcy, even if you think I was wrong to—”

“Oh no, I do not think that at all! It was certainly very wrong of him to speak and behave as he did, regardless of Mr Wickham’s involvement. I should never think it wrong for you to have refused a man you did not like, let alone not love.”

“Thank you, that comforts me. And my earlier madness notwithstanding, I am resolved to meet him with equanimity. I am sure he means to prove me wrong with his civility, and I shall not deny him that satisfaction. It is, I think, the least that I owe him. He may go away again quite satisfied that my accusations and insolence were wholly unjustified, and he will forget me—and I he!”

“I think you wrong him. You yourself have admitted that you undervalued his merits. Do not fall into the same trap again, dearest.” 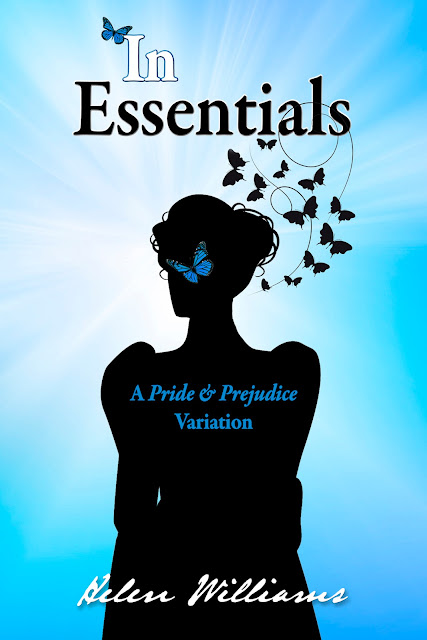 FROM THE BOOK COVER

he discovers that the woman he ardently loves is suffering from a grave illness.

Despite an affliction that has left her altered, Elizabeth Bennet is still the same person in essentials: witty, sanguine, and obstinate. However, her future is uncertain, and she struggles to maintain her equanimity—especially when Fitzwilliam Darcy returns to Netherfield and seems determined to improve her opinion of him. Now she must decide whether she is brave enough to trust him and embrace happiness, however fleeting it might prove to be. 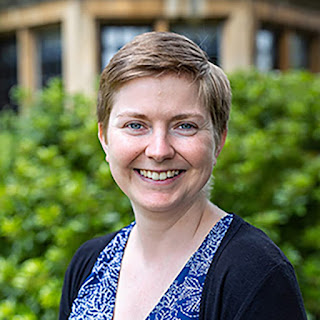 About the author: Helen Williams

Helen lives in Cambridge, UK where she works for the University of Cambridge. She has been writing as a hobby for around 15 years and has written several novel length stories based on the work of Jane Austen. Helen has Welsh roots so her stories will often include a couple of references to the land of her fathers, in addition to her two other loves – dogs and rugby. In addition to writing, Helen’s hobbies include cooking, hiking, cycling and campaigning for green initiatives. Having been diagnosed with pituitary growths in 2015 and 2020, Helen is also an active member of the Pituitary Foundation and her experiences with chronic illness inspired her latest story.

a Rafflecopter giveaway
Posted by Maria Grazia at 14:37

Thank you for sharing this significant scene, Helen. Let us hope Elizabeth listens to Jane's counsel! :)

I hope you are doing well. It will be interesting to see how Elizabeth's illness is handled.

Congrats on your first published novel and thank you for sharing your inspiration for it. I hope you are doing well.

I had to reread the first part of this. Shocked at Elizabeth (not shocked with Lydia's comment). Admired Jane's counsel

Eager to know what is Elizabeth's malady

Thank you for hosting, Maria! It is always nice to visit your blog. Helen, thank you for sharing a little more about your life and its changes. I'm glad you were able to write this story and hope you write many more.

I was moved by that excerpt. It truly showed the difficulties Elizabeth had with her own sentiments and how they played upon her illness. This book is proving to be a winner. Thanks, Helen and Maria!

How embarrassing! Thanks for sharing an excerpt :)

I have read and purchased In Essentials. It is one of the most moving JAFF that you will ever read. It's outstandingly good!